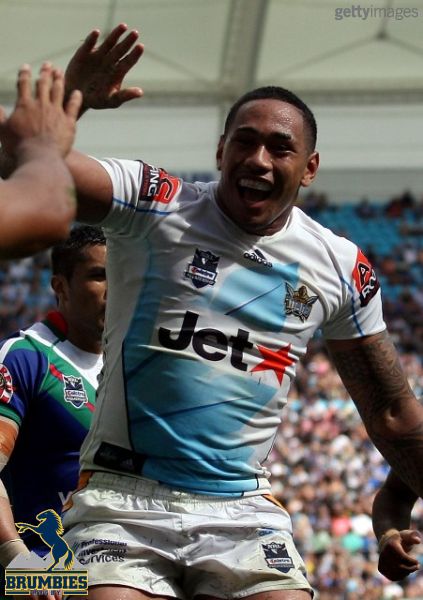 The Brumbies are extremely excited that Stephen Larkham has lured Joseph Tomane (pron: Toe-mah-neh) from playing mungo on the Gold Coast to Canberra’s icy environs.

The former Melbourne Storm and Gold Coast Titans rugby league star was looking for an opportunity in rugby union, having gone through the junior representative ranks with players like James O’Connor and Matt Toomua.

At 1.87m tall and 105kg, Tomane will be one of the CA Technologies Brumbies biggest outside backs. Over the last four years Tomane has made a name for himself in rugby league with his dominant running style, fearless aggression and bone-jolting tackles.

They’re so keen on this one they’ve linked to some YouTube of good running, but suspect grounding:

It is a bit, he had massive wraps on him as a kid, has shown glimpses of it but yet to really make a name.

Should be able to run a crash ball o.k.

It’s worrying that he can’t get a start for the worst team in the NRL.

Micki Beckett - 2 minutes ago
ACT - and border roads - need more speed cameras. The Federal Highway is a free-for-all View
Joe Seph - 21 minutes ago
My daughter came up with a solution get egg shells fill them with poo and throw them at cars being dangerous View
Mark Katalinic - 42 minutes ago
When nobody enforces the road rules what do you expect? View
Property 20

Irene Kelly - 20 minutes ago
What happened? View
Tim Van Der Vlist - 4 hours ago
No discounts for the members for resigning is a disgrace. They have to play on a mediocre (at best) course for 6 months and s... View
Eamon MacDonnell - 6 hours ago
Rowan Kemp Mark Furry Andrew Thorne stills a ways off View
News 17

tfx1 - 44 minutes ago
Why is it Canberra people do not understand risk analysis. Some simple numbers to demonstrate the effect of this big battery.... View
Capital Retro - 3 hours ago
Don't speculate on unknown unknowns. View
Property 32

John Moulis - 57 minutes ago
AstraZeneca is a dog and I got it straight from the horses mouth. I went for my first jab today and I told the nurse that I h... View
Community 2