Black Creek hanging up their boots 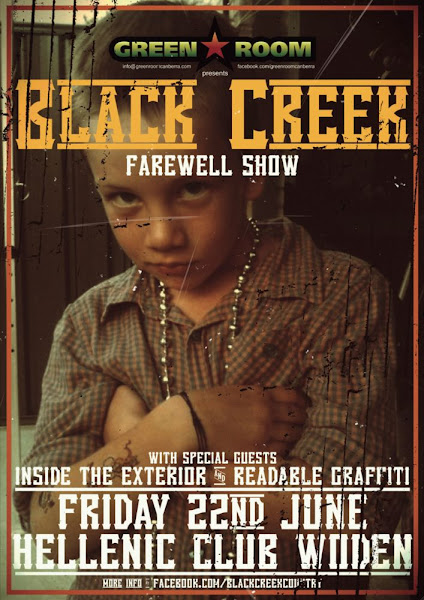 Black Creek have been one the more exciting new bands around town in recent times so it was with a great deal of sadness I learned they’re calling it a day. Facebook has the news:

On the shores of LBG, stood 3 determined men and a slightly smaller determined man. The sun glared at them through the reflections in the water, covering their masculine bodies with a halo of light and shiny sun rays. They had slip slop slapped earlier. This had no impact on the powerful beam as it cut a path right through their flesh and into their souls. A face appeared in the shallows, it was a homeless man, but was it? He was wise beyond his years and s***. Everything he said sounded like a whisper in a church and cut straight to their cores.

“You are BLACK CREEK and you were born to rock, but you are getting a little older now. Your muffin tops are starting to bring unneccesary attention to your middle regions. Sure, you could work out a little. Maybe do the occasional bit of jogging, but that would just be prolonging the inevitable. You must use all your powers and do it one more time.”

And rock they shall, at the Hellenic Club in Woden on the 22nd of June. So come down and raise a fly kick with these men as they say farewell to the stage.

Supported by MUNRO MELANO, INSIDE THE EXTERIOR and READABLE GRAFFITI

Doors 8pm, tickets $15 at the door or at moshtix.com.au

BIG THANKS TO THE HELLENIC CLUB FOR SUPPORTING THE GREENROOM.

Helen Brinsmead - 3 hours ago
Are they? Are they really? For a city state of 400 000 they're pretty good. Been to Geelong, Launceston or Elizabeth lately? View
Ryan Molyneux - 3 hours ago
Helen Brinsmead and that's exactly why our local council facilities, health services and education services garbage. View
Michael Roy - 3 hours ago
I strongly argue for paid parking to be used for local public realm. Eg paid parking in Braddon should be used for beautifica... View
News 4

The Touch Moves taps into rich tradition for Christmas single

@the_riotact @The_RiotACT
What connects actor Billy Zane to Telstra Tower? How fast can you go on an e-scooter? Clem Cummings designed what iconic piece of #Canberra architecture? If you know these answers, take our weekly Ken Behrens #Quiz! https://t.co/m0lOAYZGLY (52 minutes ago)