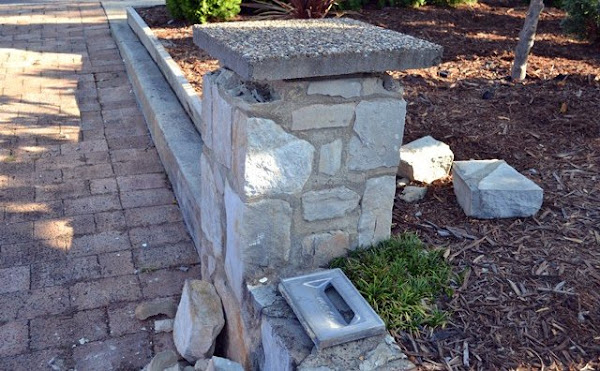 Around 10.30pm last night (Monday 4 Feb) we heard a loud bang outside only to discover our letter box has been blown up with a large firecracker.  It blew it most of it to bits, even though it’s made from stone

Random Act or planned?  Surely if it was a group of kids they could find something better to do before going back to school.  Anyone in Stirling seen or heard anything last night?  Is usually a quiet suburb, but in any case it’s been reported to crime stoppers…. 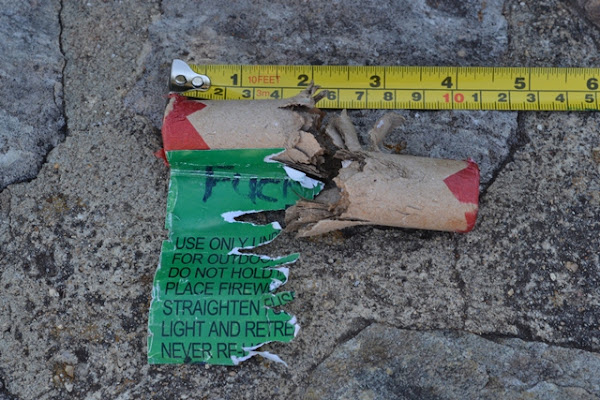 44 Responses to Blown up letterbox
Filter
Showing only Website comments

That’s really interesting. For a firework that small to be able to shatter concrete and lift and move several kilograms of stone is unlike anything I’ve ever seen.

The shattered edges of the container where it burst look very clean, without the blackening and charring I’d expect from a charge of black powder detonated inside cardboard. I wonder if it was black powder, or some other explosive.

Anyway, it is what it is. You learn something new every day.

No-one ever wants more than a reasonable amount of junk.

Ten inches is a comprehensible exaggeration, where the real length is ten centimetres.

Those special ‘ten feet’ tape measures are about to enjoy a surge in popularity.

Valentine’s Day is just poking its head around the corner.

Ten inches?? where are you gonna stick that coz it won’t fit in just anyone’s letter-box!

Ten inches is a comprehensible exaggeration, where the real length is ten centimetres.

Those special ‘ten feet’ tape measures are about to enjoy a surge in popularity.

Valentine’s Day is just poking its head around the corner.

You’re absolutely right Porker it says 10 feet on the tape measure so 10 feet 4 inches it is!

If Porker has convinced himself that 4 inches equals 10 feet, who are we to burst his bubble?

I say stand tall, Porker, and be proud.

You’re absolutely right Porker it says 10 feet on the tape measure so 10 feet 4 inches it is!

I stand corrected. Given the size, I’m surprised it didn’t do more damage.

Looks to me to be on the larger end of the old school style consumer bungers.

I have posted a photo of the actual cracker used….I don’t think it’s a home made one, hence the instructions written on it…Only thing home made is the nice message written on it. Only one cracker was found, but big enough to do the damage I guess.

Is there an ex-Mrs. Peppablack?

I have posted a photo of the actual cracker used….I don’t think it’s a home made one, hence the instructions written on it…Only thing home made is the nice message written on it. Only one cracker was found, but big enough to do the damage I guess.

Duffbowl said:
“My use was put on hold when the soon-to-be-Mrs Duffbowl suggested she preferred me not missing parts of my anatomy due to mishandling, and was not at all appreciative of the aroma that was left behind.”

Are we still talking explosives or did you do a subtle change of tack…?

Nothing nefarious. Her family had some mining experience, and she’d been raised with stories of what had happened to miners when there had been explosive mishaps.

As for the aroma, it was cordite farts, to be blunt. Spent a couple of days on the range, breathing in the residue of burning fuse cord, etc., and you would continue to be explosive for a day or so afterwards 🙂

Now with an intriguing picture of the cracker’s remains.

1. A loaded dog? Because that letterbox would be very attractive to a dog.
2. A hengeless person, seeking raw materials?
3. A certain Ms Rinehart, prospecting for minerals? If you find a foul poem attached to one of the rocks, you’ll know for sure.

The cops should be paying attention to this.

Surely a complaint to the police about a blown up letter box would be typed out on an invisible type writer, as you wait for Detective LikeIGiveADamn.

An adhesive mate of mine with a distinctly pyrotechnic streak used to make home made crater makers out of soda siphon bulbs packed with either black powder or the scavenged contents of fireworks.

I’d reckon that one of his little “packages” could just about do that.

Not that I’d know, as I wouldn’t possibly have involved myself in such heinous acts as a young bloke….

Duffbowl said:
“My use was put on hold when the soon-to-be-Mrs Duffbowl suggested she preferred me not missing parts of my anatomy due to mishandling, and was not at all appreciative of the aroma that was left behind.”

Are we still talking explosives or did you do a subtle change of tack…?

Now for f. Sake don’t put in a bigger/tougher letterbox. A guy complained to me once that it didn’t matter how strong he made it the Uni students nearby would keep blowing it up….way to play into their hands.

Wow, that is impressive!
Were there any ants in your letterbox? I have heard that in the ongoing war between red ants and black ants, one side has been developing nuclear weapons. Better check for radioactive residue. Just in case.

I’d suggest a cracker about 5cm long and 1cm wide would do the job shown.

No, as a preteen, it was usually in old mallee stumps on the SA side of Broken Hill using re-purposed crackers.

As a teen, it may have been in derelict buildings in the far northern suburbs of Adelaide, using acquired railway detonators and some chemical compositions put together in a mate’s lab.

As a 20-something, it was at the Holsworthy range, using a variety of explosives and detonation techniques.

My use was put on hold when the soon-to-be-Mrs Duffbowl suggested she preferred me not missing parts of my anatomy due to mishandling, and was not at all appreciative of the aroma that was left behind. Anyone that has spend time using cordite and breathing in the residual smoke may have some idea about the latter 🙂

Speaking to the second point above, something like an L1A2 (if I remember my terminology) detonator with a small length of fuse cord could do the trick.

Tjilpi1 - 46 minutes ago
The ACT Government denied all the way along that tjey would not be building over the existing lake bed ... that it will all b... View
Colin Vivian - 1 hour ago
Elroy Jones and if you look at the ACT audited financial statements you’ll find net financial liability, net debt, net oper... View
Elroy Jones - 4 hours ago
Ruth Brown that’s because they’re underground (where they should be!!) DA won’t get through this Gov without serious at... View
News 1

Latoya Wedlake - 5 hours ago
Joel Davies this is prefect.. my birthday coming up soon 🙂... View
Natalie Murnane - 9 hours ago
The two golf courses next door aren't enough? View
Frank Murnane - 11 hours ago
Would need to clear the trees for a chipping green View
News 36