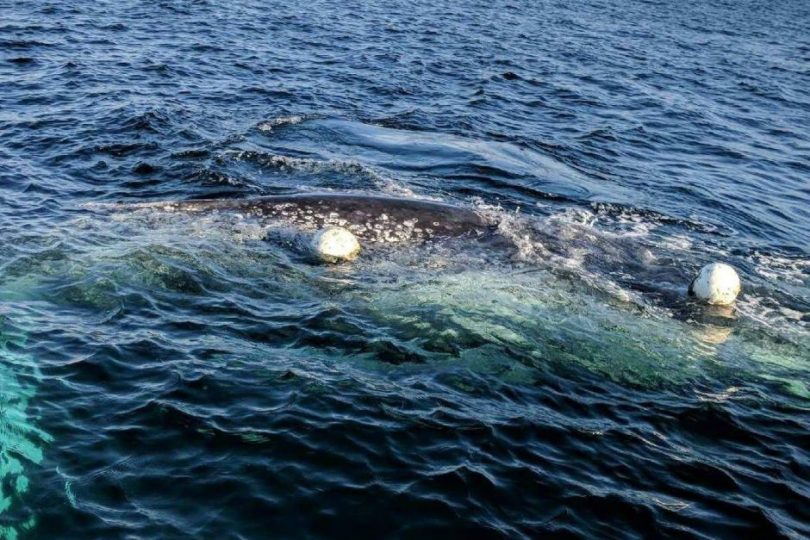 This whale was freed of rope and floats off the mid-north coast in July. Photo: NPWS.

Whale watchers and boaties at sea have been keeping watch for a whale feared to be entangled in marine debris.

The possible entanglement was reported off the Narooma coastline near Montague Island on Saturday (8 September).

The National Parks and Wildlife Service launched a plane from Merimbula Airport on Sunday in an attempt to locate the whale.

A spokesperson says at this stage the whale has not been sighted by Parks staff.

Local boat operators headed out to sea from Narooma and Merimbula have been informed by Marine Rescue NSW and asked to report any sightings.

As whale numbers continue to recover and rebuild, the tails and fins of these massive mammals are increasingly getting weighted down and tangled in fishing nets, rope, and various other marine debris.

A humpback whale caught in 100 metres of rope off Sydney was rescued in July by a specialist disentanglement crew from the NPWS.

Once an entangled whale is located, buoys are attached to slow the animal down allowing rescuers to get closer to the whale and cut obstacles free; a difficult and dangerous job.

Eight weeks ago, the NPWS told the ABC that there had been eight whale entanglements so far in 2018, compared to 21 from last year’s migration season.

The NSW Government’s, Wild About Whales website suggests that in the US, 10-20 per cent of humpback whales suffer entanglement injuries each year.

AWESOME! Loving the inquisitive juvenile humpbacks coming past Merimbula at the moment. This young whale stole our hearts this afternoon when it surfaced right next to True Blue!

The coastline of the Eurobodalla and Bega Valley is being treated at the moment with regular sightings as whales of all species and ages head south for the Antarctic summer.

To report whale entanglements or strandings, call the NPWS Incident line on 1800 232 170 quoting your location and as much information as you can give.

Majella Kesby - 26 minutes ago
Ross Courtney because it was initiated by the National Council for Women ACT. I'm sure if you started canvasing businesses, y... View
Samantha Cooper - 26 minutes ago
This is a great idea and glad to see it being promoted and put into action but why “women and kids” and even their pets I... View
Barbara Boswell - 4 hours ago
Have a bus (LR) licence, can I be of help ???? View
Motoring 30

Capital Retro - 3 hours ago
Indeed, 29% were made in China one recent month and most of those went to Europe. Most other EV brands are made in China. If... View
Capital Retro - 5 hours ago
If a diesel engine needs an operating temperature of up to 600 degrees to "clean it up", why do they all now come with Diesel... View
Ol L - 5 hours ago
Tesla’s for one are Chinese made. A luxury car tax on a Chinese car? Please…… View
News 1

Capital Crime Files - 5 hours ago
Sam Warry and wrote about and had an event last year to mark the 80th anniversary of the air disaster. https://www.google.com... View
Lyn Tutt - 5 hours ago
Rayleen Jordon not a helicopter some random light View
Sam Warry - 7 hours ago
Capital Crime Files has done an amazing job at telling the sad story of Keren Rowland. Also goes into amazing detail describi... View
Property 17

Tim Gardner - 5 hours ago
Agents are not being fair in this current market, I know of 2 sales in 2 weeks that the asking price was accepted, then the a... View
James Watt - 7 hours ago
Joel Suryawanshi if you were selling your house, wouldn’t you want your agent to maximise your sale price? Not sure why the... View
News 1