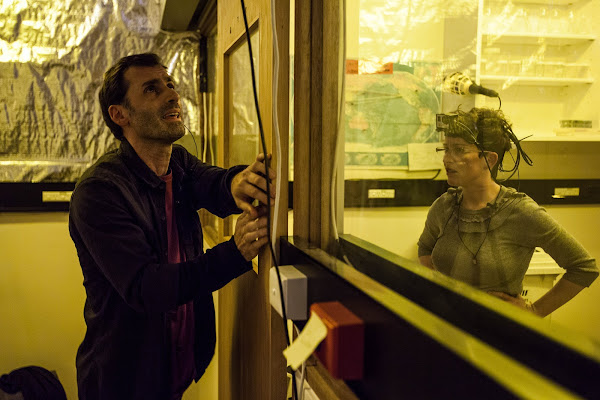 In the last few months, a new disease has emerged that is transmitted not by water, by air, by contact – but by speech. Language. Via text messaging and email, telephone or video.

This disease attacks thought itself, undermining our ability to think critically and resist other people’s influence. This is an epidemic of harmful ideas and broken logic. And it’s spreading. Whole communities of people, highly contagious, wandering about, unable to talk, unable to take care of themselves, looking for things to believe in.

Don’t believe everything you hear.

Boho’s new show Word Play is performed on-screen from across the city. The audience are situated in the CSIRO Discovery Centre lecture theatre, while the performers are live-streamed from a laboratory across the city using a high-speed video broadband connection.

Using text messages and a purpose-built phone app, the audience are able to interact directly with the performance, communicating with the performers and controlling them through a series of live computer game sequences.

Word Play is a performance lecture exploring concepts from epidemiology, a live cinema experience and a hands-on video game in the survival horror genre. 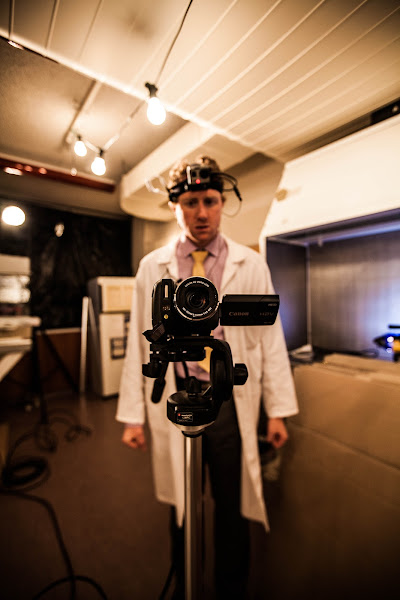 Vicki Dickford - 20 minutes ago
You can't change history it will be the 26th January no matter what so lived with it and enjoy the day... View
Peter Alsop - 1 hour ago
Your right change it to 20 January. The date the first fleet arrived in Australia.. January 26th isn't even the real date alr... View
Duncan Lennox - 3 hours ago
There is for 98% of the population View
Community 27

David Brown - 54 minutes ago
Karl Brown Clearly it is not identify but where do you think registration, sales tax on insurance, petrol tax etc goes? It go... View
Les Mitchell - 2 hours ago
Jill Worrell I agree. A lot of cyclists do travel too fast on shared paths. If you want to ride fast then use the roads and r... View
Trev Graham - 2 hours ago
Karl Brown yeah right - time for your medicine and a nice cup of Milo.... View
Opinion 52

Norman Stoner - 2 hours ago
Keran Niquet rather than making misinformed comments on Facebook, do a bit of reading on the matter. Have a read of this befo... View
Paul Mathews - 6 hours ago
great. Now need one for BARKING DOGS, eh Chris View
Daryll Rae - 15 hours ago
Mark Katalinic -cyclist by law are under no legal obligation to use cycles paths . View
News 2

Capital Retro - 3 hours ago
What a dumb way to spend money we don't have. View
Food & Wine 10

Peta Siebert - 15 hours ago
Kris Doph 2003 fires was caused by a lightening strike. The fire started in NSW and the NSW RFS left the fire to burn until i... View
Food & Wine 31

Gungahlin residents will be forced to swelter through Canberra's heatwave over the weekend and into next week without any relief...
Opinion 152

Enabler Interactive is changing attitudes to disability in three dimensions

@The_RiotACT @The_RiotACT
Heading to the coast? Holidaymakers are being urged to swim at patrolled beaches after the number of rescues on the NSW Far South Coast tripled https://t.co/WXFoOIX5Ut (1 hour ago)

@The_RiotACT @The_RiotACT
The ACT Government will allocate $300 million in this year’s budget, including $100 for the ‘Big Canberra Battery’ to help power the Territory https://t.co/jGrZzlCkcN (4 hours ago)