Brodburger gets the ministerial imprimatur 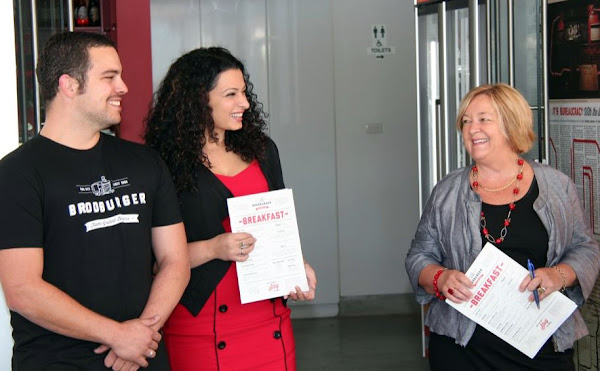 Minister for the Arts Joy Burch is very excited by the impending opening of Brodburger at the Kingston glassworks:

“The co-location of Brodburger at the Canberra Glassworks will introduce new audiences to the Glassworks and new patrons to the popular cafe, increasing the visibility and popularity of the facility,” Ms Burch said.

“It represents another way in which the ACT Government is working to further enliven Canberra’s cultural facilities.”

The ACT Government brokered a partnership between the Canberra Glassworks and Brodburger Cafe after it was ordered by the National Capital Authority to vacate the site at Bowen Park that its popular red caravan occupied.

RiotACT is going to the gala opening tonight and will let you all know what we think.

Galahs, excellent, I hear they can cook up pretty good.

Shouldn’t this have gone to tender?

ssek - 2 hours ago
More animals get hit during drought because the drainage next to roads is the only place there is green feed. When there is g... View
Karen Feng - 10 hours ago
is this an indication that we do not have enough land fornthe wildlife to thrive? theres this road from holt to Fyshwick that... View
Community 1

Brisal - 2 hours ago
“I drive past the avenues of corflutes thinking how, aside from the currently elected, I don’t know a single thing about... View
Opinion 6

Brisal - 3 hours ago
If it helps to revitalise another of those dingy laneways then I'm all for it. Scoff if you like but if it ultimately turned... View
Heavs - 8 hours ago
This just in - Government is not responsible for handling advertising and marketing for private developer. More news at 6.... View
News 1

Capital Retro - 3 hours ago
Anyone been watching Ozark on Netflix? View
News 5

bj_ACT - 6 hours ago
It was always a bit funny when Turner residents were complaining about extra buses when whole swathes of suburbs lost their b... View
chewy14 - 7 hours ago
Honestly, is there anything more NIMBY than worrying about the "city coming for their neighbourhood" in an area less than 1km... View
HSewell - 8 hours ago
Good result View
News 3

A_Cog - 18 hours ago
Should the ACT get its own police force? NO! It'd be run just as badly as every other ACT Govt service. Instead of buying ser... View
News 18

wildturkeycanoe - 20 hours ago
I'm still waiting for surgery, almost up to my "expected" 365 days on the Category 3 list. This is after initially waiting fo... View
HiddenDragon - 22 hours ago
This year's Annual Rates Assessment Notices tell ratepayers that 31% of rates payments go towards funding the health system -... View
Opinion 110

chewy14 - 20 hours ago
Russianafroman, I go from being called a right wing nut job to a Socialist Comrade in the space of a few stories these days.... View
russianafroman - 24 hours ago
Capital Retro I don't watch or listen to the ABC. But it wouldn't surprise me. View
ACT Election 115

Reno Minopoli - 22 hours ago
Clinton Berry which part of "Three decades’ population growth "needed" do you not understand? Kids that grow up replace tho... View
Capital Retro - 23 hours ago
Well, I can't speak for everyone but I have certainly always "paid my own way". In the early days of SMSFs the deductibility... View
ssek - 23 hours ago
The greens and pretty good economic plan are an oxymoron. View
Property 1

Demolition of the old Strathgordon Court public housing complex in Lyons has begun, with the heavy machinery moving in on...
Opinion 6

I couldn't help but scoff when I saw the most recent round of advertising for the Verity Ln Market development...
Breaking 1

@The_RiotACT @The_RiotACT
Live in an apartment? Pet-friendly changes to ACT strata laws are on the way https://t.co/RUQLb34wx7 (46 minutes ago)

@The_RiotACT @The_RiotACT
Andrew Barr and Alistair Coe faced off for the ACT's only televised leaders debate last night, with both sticking to their well-worn lines and slogans https://t.co/9BhYGDesyK (1 hour ago)

@The_RiotACT @The_RiotACT
The investigation into religious sect Twelve Tribes, that lives in Bigga, two hours north of Canberra, will likely continue until the end of 2020 or early next year https://t.co/rYk3gTVr8o (2 hours ago)