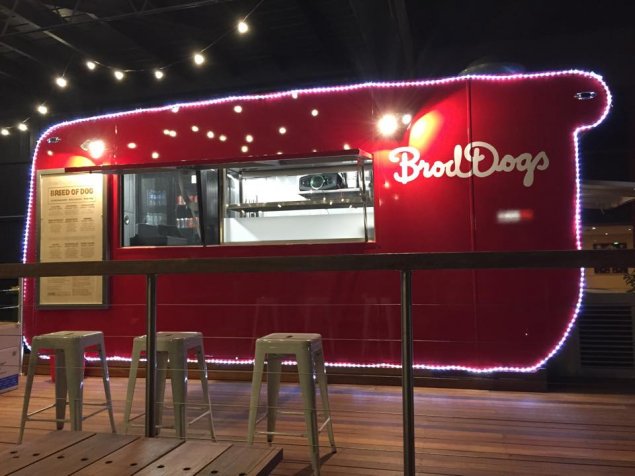 One of Canberra’s most loved food vans, BrodDogs, has found a new home on Braddon’s Lonsdale Street.

The bright-red gourmet hotdog van (a renovated version of the old Brodburger caravan), officially opened for business at urban village The Hamlet this week.

“It’s lovely for all of us to be here in one place serving great food. We’ve actually just introduced puppy-sized hotdogs so that you can eat a BrodDogs hotdog and still have room to try food from the other vendors,” she says.

As you might expect, these gourmet hotdogs are made with gourmet ingredients. BrodDogs’ hotdogs are made locally by Richard ODell at Griffith Butchery, with natural casings and no preservatives. The hotdog buns are baked fresh daily too.

BrodDogs is open from 12pm every day, and while opening hours vary, Joelle says that it will be open late from Thursday to Saturday – perfect for a 1am snack after a big night out.

Try a BrodDogs hotdog today at The Hamlet, 16 Lonsdale Street Braddon, from 12pm Monday to Sunday.

Brian Rutherford - 1 minute ago
Mark Newman you realise this isn’t an ABC page right?🤦🏻‍♂️🤦🏻‍♂️🤦🏻‍♂️ View
Brian Rutherford - 15 minutes ago
Warren Curry a sticker the size of a postage stamp and that you can’t read in one go because most of it’s obscured? They... View
David Jones - 18 minutes ago
Okay, but zero of those accidents happen if no one was riding on the road View
Property 13

Dee Kaden - 12 minutes ago
What about men that are homeless??? Anything similar for them? View
Mark Heinrich - 2 hours ago
These things are not either or. There’s a need for multiple solutions to multiple problems. Don’t knock something just be... View
Cameron Murtagh - 3 hours ago
Abbey Snell https://domesticviolence.org/domestic-violence-against-men/ View
Community 43

Steve Whan - 36 minutes ago
Just curious, do instigators of damage have their terms effected due to vandalism caused? I dont know. Just curious. View
Inca Serrated - 2 hours ago
Not a single mention of the conditions that prisoners are living in... Lockdowns, no family contact for over a year, no meani... View
Lori J Tas - 4 hours ago
Kriso Hadskini there are currently rules around how much the govt can enforce people to pay back week to week, sadly, given h... View
Lifestyle 14

Have you seen the bright red and yellow ‘Happy’s Restaurant’ sign in Garema Place? It’s hard to miss. Go inside...
Property 12

@The_RiotACT @The_RiotACT
Edgar's has added another restaurant at its iconic location in Ainslie. The Inn offers a European bistro feel with a dark, moody atmosphere ... and the mash of Sophia Brady's dreams https://t.co/AoXEOQ5I8Y (47 minutes ago)