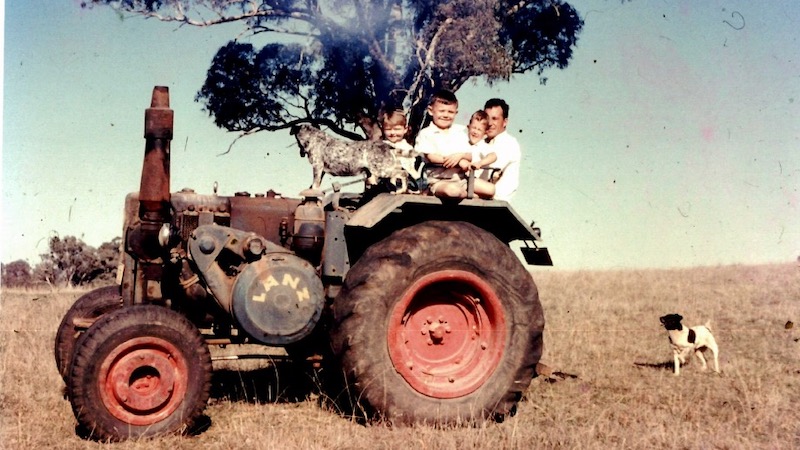 Chris and his brothers with their father in the 1960s, learning to love a tractor. Photos: Supplied.

Chris Holmes marvels at the ingenuity of old tractors. For 19 years in the village of Wombat near Harden, Chris has watched people just like him unload their trusty machines from semi-trailers for Australia Day.

Many compete in tractor pulling. In the hands of a good driver the tractor, while pulling a sled, becomes life-like. “The power goes from one back wheel to the other and it just looks like it’s walking along. It’s quite amazing to look at,” Chris says, with more than a little admiration for driver and machine.

His passion for well-worn tractors is contagious.

Over the years, the more old workhorses Chris and his brother John brought home to restore, the more his family grew to love them. In fact, he went to a tractor sale one day and splashed out on a few old favourites and returned home to his wife, Sue, who asked: “Where is the tractor?”

“There’s a semi-trailer bringing ’em home,” Chris replied. “You wouldn’t believe it, I’ve got myself another Fergie.”

“I’m the one who collects Fergies. They’re all mine,” Sue said with a satisfied grin.

As more tractors joined the collection, each member of the Holmes family lays claim to a particular model. This happened so often that Chris’s long-term plan, to trade in vintage tractors for his retirement, lost traction.

“There goes the super,” he adds with a contented smile.

He and John often tooled around with tractors on their farms. After joining an antiques club to get parts, they heard tractors were getting scrapped so they began collecting them and wound up with more than 100 between them.

The Holmes’ stable of vintage and antique models dates back to the Fordsons of the early 1930s. “Massey Harris sold a lot of tractors around here, so we have acquired a fair few of those,” Chris says.

Luckily, John’s is a mechanic, a rewarding skill for the grease-smeared brothers when their old machines need a re-boot.

“He tends to just walk past them and they go, sort of thing,” Chris chuckles.

A builder, Chris has enough mechanical nous to introduce his eager son Ben and son-in-law Nick Apps to the antique engines.

“The first two things you learn if there’s a problem, it’s either fuel or power. You clean the carburettor out and the fuel system, then check the spark, if you have both of those, generally they go,” he says. 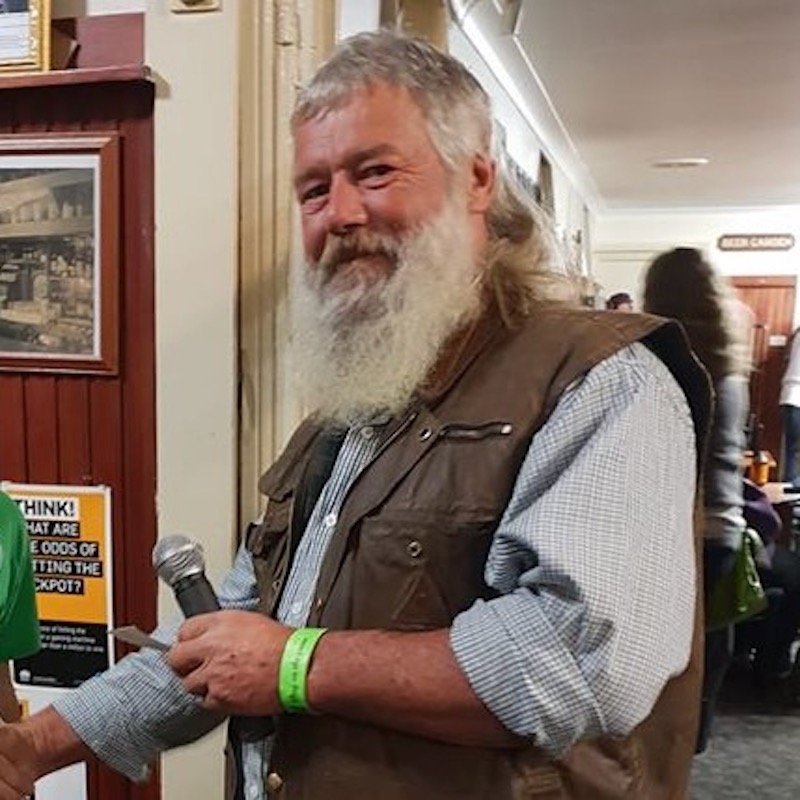 At the heart of Wombat’s social scene, Chris Holmes.

“One of our friends bought 27 tractors from Jugiong (near the Murrumbidgee River and Hume Highway) when they closed down the asparagus farm there,” Chris says. “A lot of the engines were full of water and whatever from being neglected.

While today’s shiny new, air-conditioned, GPS-equipped tractors can drive themselves, they need a computer technician to fix them. They’re useless for collectors who rejoice in rusty old-timers which can be repaired with a few basic tools.

“I bought a tractor here a while ago, a W30 International, and they had converted the flywheel on it to run a generator and put a light on it,” Chris says. “This was before tractors were fitted with lights. With a light, they could plough at night, it was quite ingenious.” The Massey Harris 25 and Chamberlain are also favourites.

But Chris’s immediate concern is Australia Day 2020 when tractor enthusiasts from across NSW descend on Wombat for the tractor pull and parade.

The tractor parade wends its way past punters under the pub’s shady verandah. Also joining in are the local kids on their bikes (the youngest giddy with excitement) and horses. They all head to the oval for antique engine displays, craft and market stalls. People bring their tractors from all over southern and western NSW. 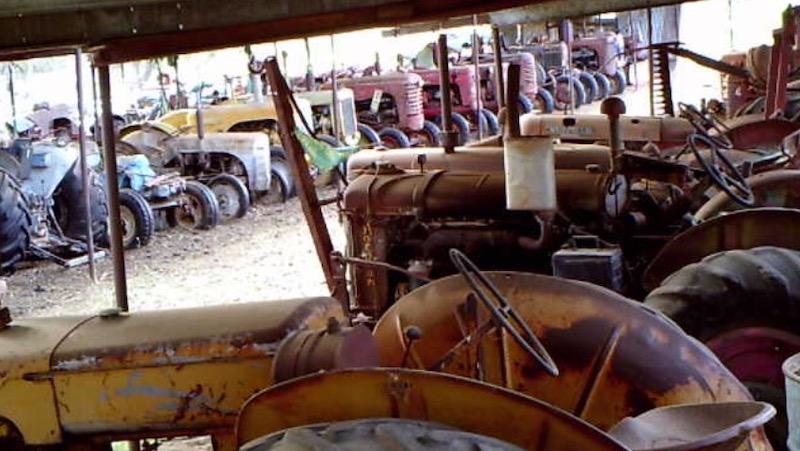 Some of the Holmes brothers’ old tractors.

Vintage tractors reflect the country’s history. “With the International 15/30, one of my earlier tractors, you always get people to rub their hand underneath the front drawbar, “Chris says. “It’s got groove marks in it where it has been driving over paddock stubble. For straw to gouge grooves in a steel bar like that, it must have done some work in its day,” he says.

I just love that first image of dad and the kids and dogs on the Lanz Bulldog. From memory, those tractors had a single cylinder engine that was started by “gravity and balance” and the ground used to shake as the “thump, thump” began.