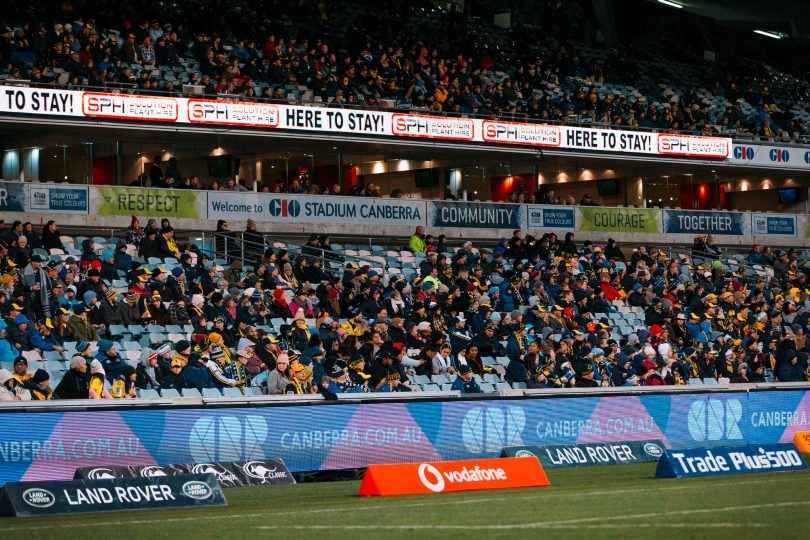 Last year’s average crowds were the lowest since 1996. Photos: Photox

Last year’s home crowd attendance dropped to a 22-year low and the side failed to make the finals since 2012 but the Brumbies hope to make the past a distant memory and vow to dazzle on the field to encourage fans back to GIO Stadium.

As the Brumbies prepare to begin their Super Rugby season against the Melbourne Rebels on Friday night (15 February), CEO Phil Thomson is adamant the side’s attacking style of rugby implemented last season will lure its disenchanted fan base back to games.

It was a disappointing 2018 season for the Brumbies, who only won four out of eight home games and averaged home crowd attendance of 8,391, the lowest average attendance since the Brumbies’ inception in 1996.

The last time the Brumbies clashed with the Melbourne Rebels at home only 5,283 fans turned up to watch the Brumbies let a 14-point lead slip in a heartbreaking 27-24 loss in icy conditions. The shockingly low attendance was less than that of the rugby league World Cup match between minnows France and Lebanon in 2017, sparking concern regarding the future of the club.

The rows of empty seats were in stark contrast to the turnout at the Brumbies Super Rugby finals against the Crusaders when the stadium packed out with 28,000 fans, but the Brumbies hope to turn a new page in the club’s history and encourage fans back to the stands.

Friday’s night clash will be the first time the Brumbies have played at home in a season-opener since 2016 and Brumbies’ chief hopes the stands will be full.

“There are challenges in rugby at the moment but within our organisation, we are doing our best to look after our own backyard. That will convert to good performances on the field and plenty of supporters at GIO Stadium,” he told Region Media.

“Our number one goal is to win the Super Rugby title and I think if we have a winning team, the crowds will grow at GIO Stadium.”

Thomson said the club has made a concerted effort to share the message with the rugby community in the region that the Brumbies are Canberra’s team.

“It is important that fans connect with the team and understand who our players are,” he said. “Since the Brumbies started back in 1996, the message we have been sending is that we are part of the community and part of the region and that everyone should be proud of them and support them.” 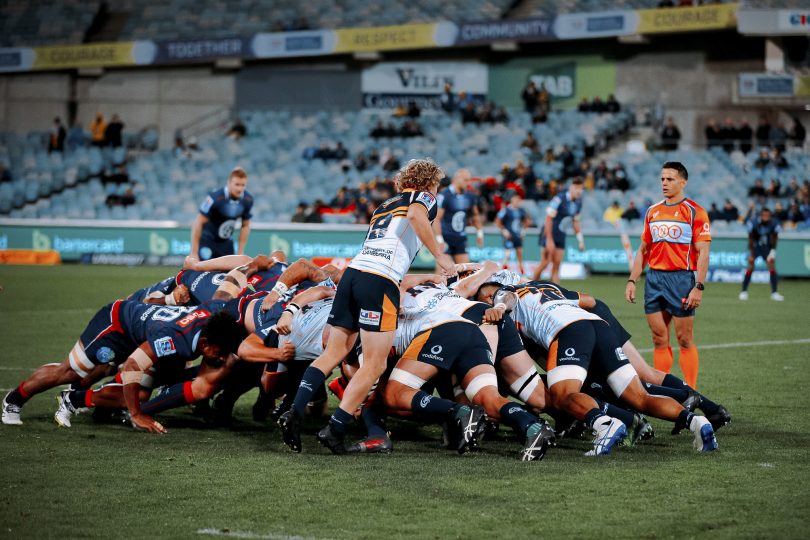 Thomson hopes the club’s decision to transition from a conservative playing style to an attacking style will inspire the next generation of players.

The Brumbies’ attacking prowess shone through as the 2018 season drew to a close, winning four of their last five games, with the Brumbies scoring 56 tries last season, equalling the most tries in a season by the club in the past decade.

Thomson hopes the club’s decision to transition from a conservative playing style to an attacking style with the ball in hand will inspire the next generation of players in the crowd and will convince more kids to play rugby.

“We want to play rugby that is attractive and that is entertaining for the crowd and we need to be inspiring the next generation of young players in the region,” he said.

Star flanker David Pocock echoed Thomson’s sentiments and said the side is desperate to entertain fans.

“I want fans to see the Brumbies play some exciting rugby,” Pocock shared. “Last year, it’s always tough with new coaches but I think we are now more on top of the way we want to play and we have got the players who are able to do that.

“We want to play rugby that inspires young kids to play the game, both boys and girls, that also entertains fans.”

Pocock will play the season-opener at GIO Stadium alongside captain Christian Lealiifano and nine other players in the starting XV that have international experience. New signings James Slipper, Irae Simone and Toni Pulu have all been selected to make their debut for the club.

Capital Retro - 35 minutes ago
Indeed, 29% were made in China one recent month and most of those went to Europe. Most other EV brands are made in China. If... View
Capital Retro - 2 hours ago
If a diesel engine needs an operating temperature of up to 600 degrees to "clean it up", why do they all now come with Diesel... View
Ol L - 3 hours ago
Tesla’s for one are Chinese made. A luxury car tax on a Chinese car? Please…… View
News 1

HiddenDragon - 56 minutes ago
The Commonwealth has clear constitutional responsibility for quarantine (as the critics of hotel quarantine repeatedly point... View
Community 14

Capital Retro - 2 hours ago
Still waiting for the details of those mythical fossil fuel subsidies. View
whatwik - 6 hours ago
WARNING - The following could cause great distress across the spectrum - there will be those upset the ACT may be falling beh... View
Community 44

consumeradvocatecanberra - 2 hours ago
I am a Vietnam Vet and spent 40 years in Defence. I try to keep abreast of the mumbo jumbo that is coming from the Government... View
TimboinOz - 5 hours ago
Long overdue. It's NOT just the fallen. It's also the ones who come back, permanently damaged. There are way more of them tha... View
Community 2

consumeradvocatecanberra - 2 hours ago
The elephant in the room is of course that we are used to taking the car. Have yoursay and other window dressing engagements... View
show more show less
*Results are based on activity within last 7 days

UPDATED: A not guilty verdict was recorded by the jury in this matter. JUNE 16: A man allegedly continued to have...
Community 45

The Canberra Liberals have lambasted the ACT Government for focusing on issues that don't affect Canberrans and trying to turn...
Opinion 35

@The_RiotACT @The_RiotACT
Is it worth paying more for posh petrol? James Coleman gives you the good oil on choosing the right fuel https://t.co/C3hqQAL3Nl (44 minutes ago)