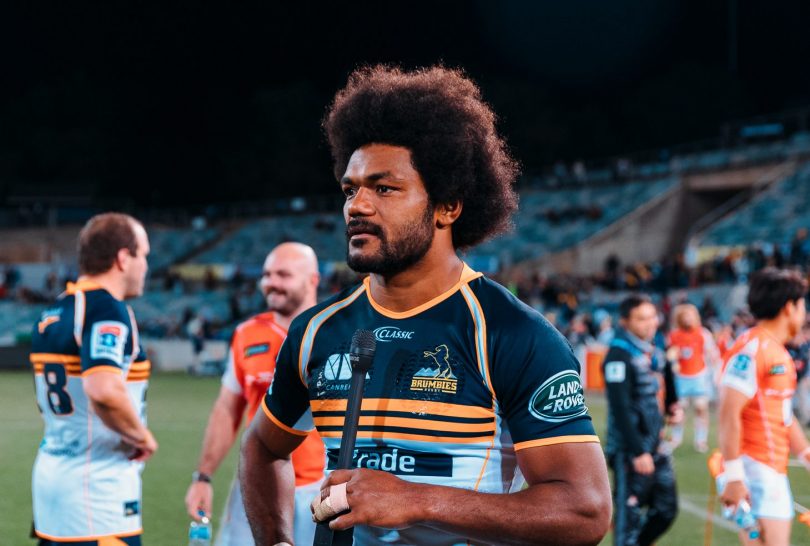 Brumbies fan favourite Henry Speight has signed a two-year deal with the Queensland Reds for the 2020 and 2021 Super Rugby seasons, ending his nine-year stint in the nation’s capital.

The winger has played 19 tests for the Wallabies, having made his Brumbies debut during the 2011 Super Rugby season against the Chiefs in Canberra Stadium.

The ‘Fijian Flyer’ has captivated Canberra crowds with his deadly left-right steps, his strong fend and hard running style to become one of the most potent outside backs in world rugby.

It is believed a major factor in the 31-year-old’s decision was to be closer to his brother and sister who live in Queensland. 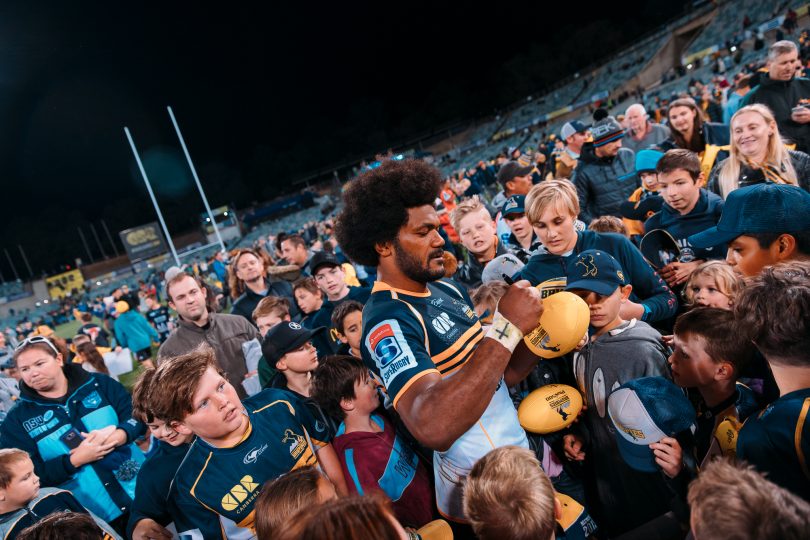 Speight has always been a major drawcard at Brumbies matches.

He has scored 45 tries in 119 appearances for the Brumbies, becoming one of the finest wings of his generation and becoming a fan-favourite in the process.

“I will be forever grateful for the Brumbies for giving me the chance to play Super Rugby at a club with an unbelievable culture and strong history,” Speight said in a statement.

“The Canberra community as well has been fantastic to me and has given me so many memories inside and outside of rugby. The Gungahlin Eagles, Lifeline Canberra and the Fijian community here in Canberra are just a few examples of what has made my career with the Brumbies so special.

“Whilst I have many memories of amazing away victories, there is nothing better than playing for the Brumbies in a win at GIO Stadium. The Brumbies fans will always hold a special place in my heart.

“I will never forget the kids in who shouted to me when I was on the wing when the ball was on the other side of the field and for those who waited in the middle of winter for an autograph and a chat.

“Whilst I might have a different coloured jersey next year, I can’t wait to see those smiles again in the future.

“I am passionate about the game in this country, see a bright future for Australian Rugby and still have ambitions to contribute at the national level.

“This was the toughest decision I have ever made but discussions with my partner Louise and as an expecting parent for the first time, we thought that a longer-term arrangement and the chance to be around family was the right choice for us all. Regardless of what that future may hold, I am happy and extremely proud to be a Brumby for life.” 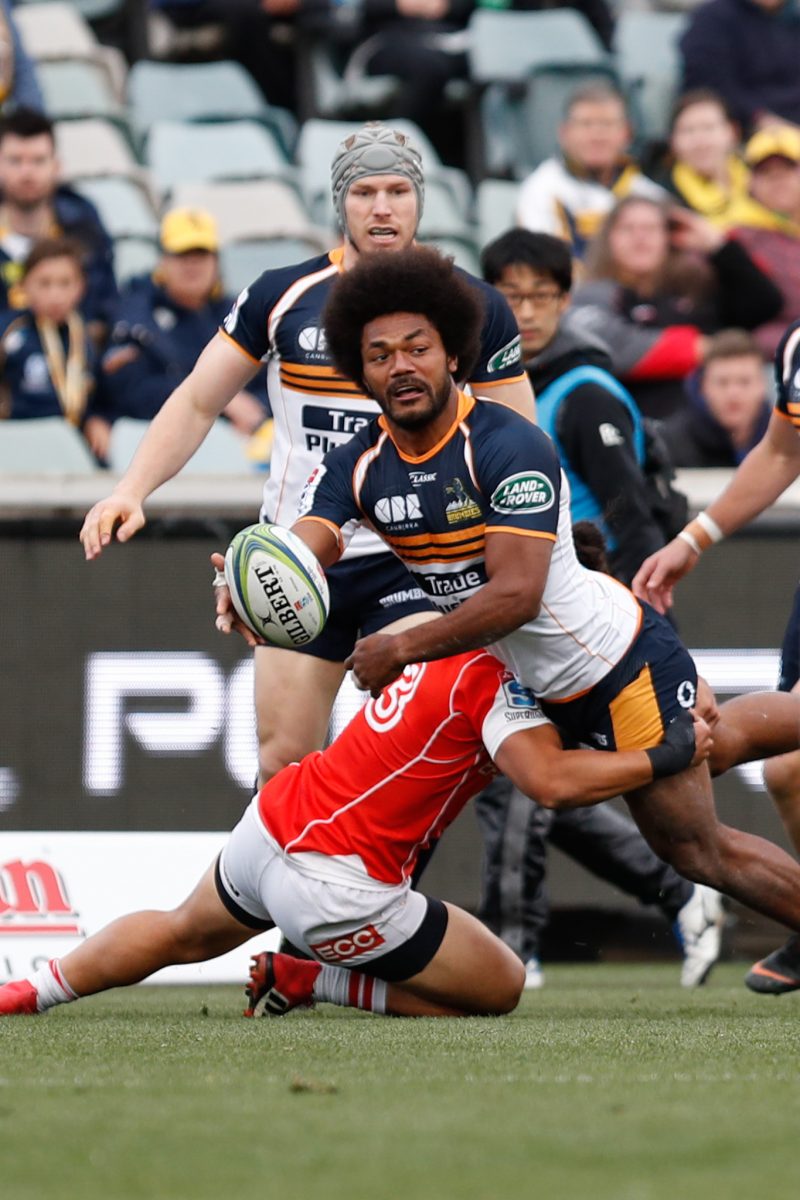 Fans will not see Henry Speight or David Pocock in a Brumbies jersey next season.

Brumbies head coach Dan McKellar said Speight is a Brumbies legend and he always will be.

“He is a loved character in our team and loved in the community and is incredibly popular throughout the region,” he said.

“Henry has done so much work for charity off-field and has obviously been an enormous contributor on-field.

“Once a Brumby always a Brumby and that is certainly the case with Henry Speight. When he returns to us, at some point of time in his career in an opposition jersey, I would imagine he would get a warm reception, and he deserves that.

“Whilst it’s sad, we certainly understand why he has made the decision that he has, and we wish him all the best for the future.”

Lesley Howden - 2 hours ago
Wayne howden View
Dianne Gilbert - 4 hours ago
Lauren Rogers I remember your Business excursion! View
Olympia Muir-Williams - 10 hours ago
Molly Salim as the person who brought frugii into my life i want to grieve with you View
Food & Wine 7

stargazer - 3 hours ago
I grew up listening to my mum chin wagging to Anne for ages and eating their custard tarts and vanilla slices! Us kids called... View
tr0jan - 13 hours ago
I grew up in Narrabundah, Danny’s bakery has been there as long as I can remember and our family have been enjoying the del... View
sebastiancampbell - 14 hours ago
I think that the traditional atmosphere and service in Danny’s is fantastic. It is something that is sadly lacking in the f... View
News 13

Gabriel Spacca - 8 hours ago
By 2027 I hope to be able to retire and move to a community that is less at the whim of developers. View
Capital Retro - 11 hours ago
"by 2045 there won't be anyone car maker in the world still making petrol vehicles, and a good thing too." Remember "peak pet... View
Tom Adam - 11 hours ago
And yet we keep pointing out that Mawson is a much better terminus for stage 2B to remove bus trips of 1 stop for thousands o... View
Sport 33

Caroline Le Couteur - 10 hours ago
Good work View
Natalee George - 13 hours ago
Louise Bilston you definitely were a big part of me getting back into coaching 💙💚 View
Louise Bilston - 13 hours ago
Thanks Brendhan! NACT couldn’t ask for a better Chair for their FARM committee. You have big shoes to fill following Scott... View
Opinion 4

cockneyreject - 11 hours ago
There’s a lot of good down here in Canberra but there is a certain insularity and in some ways management is a generation b... View
Property 4

c j - 15 hours ago
Indeed. Completely overlooked the negatives and displacement that this will bring thousands of Canberrans View
News 11

The owners of the Zoo Bar and Grill are taking Canberra's nightlife to the next level by launching the Mile High...
Community 14

A documentary made by a Batemans Bay filmmaker about keeping Australia's oldest show on the road is one of five...
Opinion 28

The Canberra bubble proved itself to be an opaque and murky edifice as it settled over Parliament House last week....
Community 14

Roasted garlic ice cream, pistachio and cherry essence, spearmint and salted caramel - these were the ice cream flavours that...
News 13

@The_RiotACT @The_RiotACT
Darrell Weekes has spent his career at the top end of town, and he brings all his experience to his role as president of the Goulburn Chamber of Commerce https://t.co/oPhvBYf2Tf (2 hours ago)

@The_RiotACT @The_RiotACT
Relax with rhinos and giraffes as the @national_zoo & Aquarium offers a series of unique morning yoga classes among the animals https://t.co/qIekMt93ot (12 hours ago)