It went down to the last minute but the Brumbies didn’t have quite enough in the tank to beat the Chiefs in Hamilton despite leading for much of the game.

Great season by a team who seem destined for greater things.

Che has asked me to remind the Brumbies that we’ll be recording the rugby podcast at 7pm at Duxton if they feel like swinging Mad Monday that way.

And it’s his birthday, so I have.

UPDATE: Foxsports has the full report:

THE Brumbies will take just seven days off after their crushing grand final defeat to the Chiefs before starting training again to claim the premiership in 2014.

The Brumbies fell short of a fairytale victory last night after being steamrolled late by the Chiefs, who became just the fourth franchise to defend their Super Rugby championship.

The Chiefs scored 15 points in the last 15 minutes to claim a remarkable 27-22 comeback victory after the Brumbies had led for the previous 65 minutes.

None of the Brumbies used their exhausting 31,000km month-long travel schedule as an excuse for their late slide after the match, instead blaming poor execution and decision-making in the final quarter. 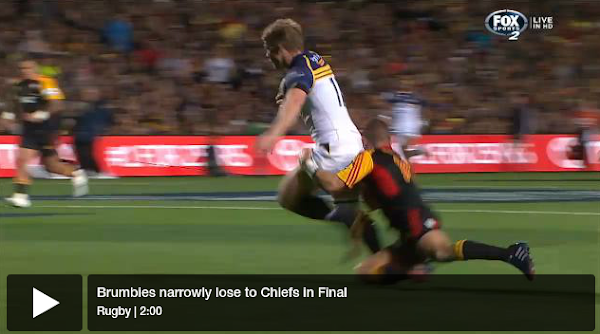 Tags Brumbies chiefs finals rugby so near and yet so far

What’s wrong with you people? The Brumbies are the 2nd best Super Rugby team in 2013! I enjoyed their journey this year, win, lose or draw. The glass is def half full.

Gee we’re being very forgiving of the Brumbies for exceeding expectations this season and for a good first hour of the game – that last 10 minutes was a choke for the ages.

I’m sure I’m not alone in saying that I’m extremely fed up with Australian rugby teams going over to NZ & just falling apart at the seams.

It feels like I’ve been watching the exact same performance for the last decade. Making comedic errors, giving away inexcusable penalties & losing all composure. It’s humiliating at times.

Very proud of the Brumbies & their efforts this season but honestly, they completely feel apart in that last 20 mins. They really should have put that game away & we should be celebrating a 3rd Super Rugby title.