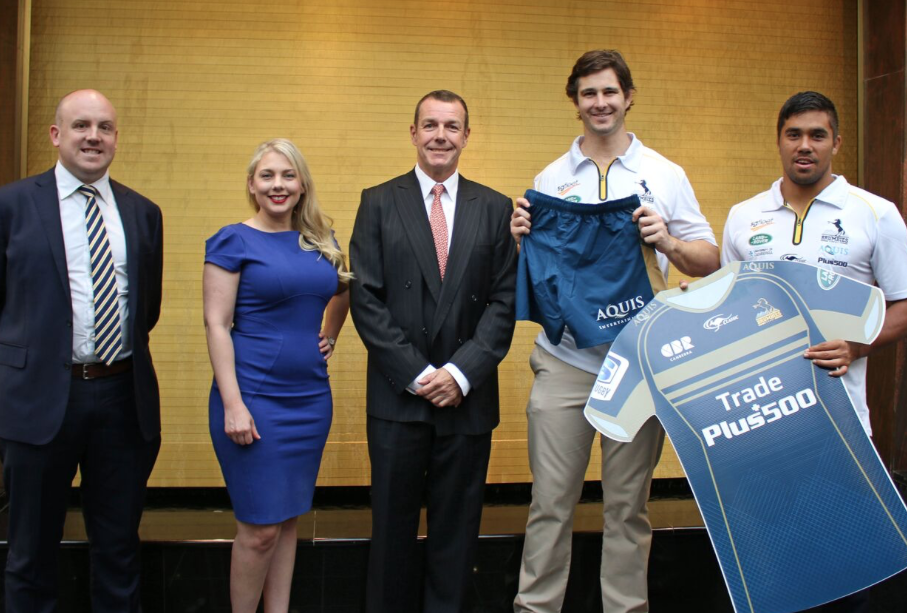 The Brumbies have a new naming rights partner for the 2017 season: Israeli-headquartered Contracts For Difference (CFD) trading platform Plus500.

Aquis Entertainment continues as principal partner in a deal that will see the franchise’s jersey become the most valuable in the Australian Super Rugby Competition, according to the Brumbies.

Neither party has disclosed financial information regarding the deal or the length of the agreement.

Plus500 is based in Israel, with regulated entities in the UK, Cyprus and Australia, and additional operations in Bulgaria.

The online trading company identified the Brumbies as a key partnership opportunity as it looked to build its brand in Australia and add to its existing sponsorship portfolio, which also includes a major sponsorship deal with Spanish soccer giants Atletico Madrid.

Brumbies General Manager – Commercial, Simon Chester, was excited to welcome Plus500 on board and thanked Principal Partner Aquis Entertainment for their willingness to vary the terms of the existing deal to allow it to happen.

Mr Chester said he believed there was natural alignment with the Plus500 brand.

“We are delighted to welcome Plus500 on board,” he said.

“We are eager to leverage their support of sport around the world and in the process extend the Brumbies’ already strong global brand.”

Plus500 Australian CEO Sean Murphy said he was honoured to partnering with a club which has established a strong brand in Australia and across the Pacific.

“The Brumbies are a natural fit for us, and we share with them a passion for striving for success whilst respecting our customers, fans, partners and employees,” he said.

As part of the deal, Aquis Entertainment remains principal partner but, in 2017, will feature on the shorts and collar of the playing strip. The Aquis partnership will also extend to include increased support of community programs including pathways, coaching and development.

“We enjoy a very positive long-term relationship with Aquis Entertainment and they have recognised the potential of this opportunity to provide an unprecedented financial boost to the club,” Mr Chester said.

“We are also looking forward to the continuation of our strong partnership with Aquis and activating their support of our community programs.”

Aquis Entertainment CEO Jessica Mellor said the deal with Plus500 was a strong show of support for Brumbies Rugby and their forward plans.

“As the club’s long-term Principal Partner, Aquis Entertainment is committed to the success of the club, on and off the field.

“We’re particularly pleased that we’ve been able to demonstrate this long-term commitment by working together with the Brumbies team to help them secure this outcome.”

Shayne Borger - 4 minutes ago
Super rude, aggressive and dangerous View
Naomi Breasley - 59 minutes ago
Why don't the AFP drive around & do traffic stops like Police do in other states? View
Veronica Goulthorpe - 2 hours ago
Susan Jones I agree, I also think people are getting more aggressive View
Property 24

Vicki Schramm - 59 minutes ago
Marty Hoenig , actually the drinking water here is amazing. Although it did take a while to get it right. View
Opinion 16

Michael Roy - 1 hour ago
We need to create some LTNs View
HiddenDragon - 2 hours ago
"... and start frontloading infrastructure instead of just thinking about it and retrofitting when demand is overwhelming." W... View
Mick Andrews - 3 hours ago
Honestly I love doing 85 on the parkway, il stick too it😆 View
Breaking 19

whatwik - 1 hour ago
That's pretty horrible - not only did I miss out in the lottery but all I have is a scar from a rushed vaccination when about... View
chewy14 - 3 hours ago
Acton, The opposite is true. The more we read and hear, the more it shows that the risks around AZ are tiny and that the real... View
whatwik - 3 hours ago
Yes, I have a brother interstate in a somewhat similar situation who is probably gonna remain unvaccinated - which could be d... View
News 6

Ol L - 2 hours ago
The lodge I work at has had no cancellations even though just about every guest staying is arriving from Sydney. Amazing how... View
Food & Wine 10

Brindie - 4 hours ago
The decision to go into voluntary administration is disappointing for NHC clients and their patients. However, the delay in e... View
Breaking 1

Dom Polegubic - 6 hours ago
This is a good link to an intro to Croatian wines: https://winefolly.com/deep-dive/introduction-to-croatian-wines/... View
Lifestyle 2

inverted63 - 7 hours ago
Oh dear. ...Makes accusations about made up statistics & then cites a total of 3 successful female artists across a whole ind... View
Breaking 1

Shay Daisy - 7 hours ago
So sad. Please everyone be careful out there. Be patient, observant and kind so we can all be safe. View
show more show less
*Results are based on activity within last 7 days

The Canberra Southern Cross Yacht Club in Yarralumla is about to set sail on a redevelopment of its lakeside hospitality...
Breaking 19

@The_RiotACT @The_RiotACT
Want a new best bud? Our @rspcaact #PetsoftheWeek Buddy the dog and guinea pig Porky are looking for their perfect matches https://t.co/vtlWP23MJc (49 minutes ago)

@The_RiotACT @The_RiotACT
This owner-built #McKellar family home comes with all the indulgent extras that elevate everyday living https://t.co/fXeV7HnGCL (2 hours ago)

@The_RiotACT @The_RiotACT
ChooseCBR data reveals that some businesses processed more than 500 vouchers in the 25 hours the scheme ran, and almost 40 per cent of the vouchers were claimed at stores like grocers https://t.co/vVrNddImTH (3 hours ago)