Bucking the trends in business: ForwardIT 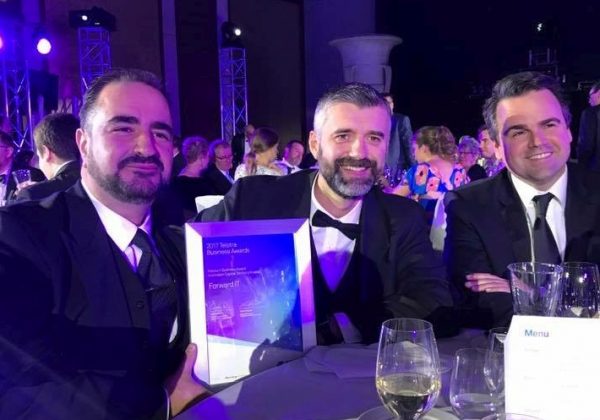 It’s a well-known fact that partnerships in business are fraught with danger. But there is one business here in Canberra where the strength of the partnership is one of the assets and secrets to entrepreneurial success. Enter ForwardIT, an IT support service for corporate and government clients, as well as Not-For-Profits and SMEs.

The Directors of ForwardIT, Dom Polegubic, Stephen Seckar, and Nick Kattas, (who are equal partners in this business), were chuffed to be named finalists in this year’s Telstra Business Awards. In fact, that’s where I got chatting to them and realised just what a special business they have built here. It all started way back in 2002.

Nick is Greek, while Dom and Stephen are Croation. Amazingly, they first got to know each other when they attended Copland College. All the boys were into IT in some shape or form at the time, and when they left school each of them pursued a career in IT related businesses. Straight from school, Nick and Stephen went into Electronic Engineering at CIT while Dom studied Business Administration at Canberra University, and unusually, they have stayed in close contact in their working lives ever since.

They each ended up working at a company called IPEX, to begin with. Stephen joined first and then managed to get the other two friends on board when that company was expanding. That was back in 1994. IPEX was servicing the corporate and government IT sector and all in all, they enjoyed their work there.

When that company expanded, however, winning big contracts with large government departments, their small business clients were no longer a priority for IPEX. That’s when the three saw an opportunity and decided to form a partnership to go it alone. ForwardIT was born.

Indications of running a successful business? Their very first client is still one of their loyal clients today, with Steve Bates and Andrew Pickering’s accountancy firm, Bates & Pickering, which they say also has a great story. A friend of Dom’s worked there and recommended him, so that’s how they managed to pitch for a contract, and won it hands down, misère!

Significantly, each of the guys has a background with parents who were very hard workers. Nick’s mother and father owned several Takeaways over a thirty year period. Stephen’s dad was a bricklayer, and Dom’s dad was a stonemason, while their mothers were both commercial cleaners for many years. All parents had such a strong work ethic, and that powerful legacy has been passed on. Nick tells me that he started working in the family business from the age of 12, and he tells me he has only ever been unemployed for 24 hours of his life, so far. That’s a powerful work ethic right there!

But when they started out, they never anticipated what the business journey might be like. (A common experience with business people.) You see, the boys dreamt of working in their business in the mornings and spending the afternoons playing golf and going to the pub. How do you think that panned out? You’d be right if you thought it was not quite as they had planned it. In fact, in the fifteen years, they have been in business together, they have only managed to play golf three times during work hours in all that time!

Partnerships, being precarious at the best of times, are no deterrent for these three directors, however. These guys operate on a “2-against, majority rules” system, regarding business decisions, and it works well. They have also divided the workload into three distinct roles, which is probably one of the secrets of any partnership success so that each works to their strengths and no-one steps on the toes of another. Nick looks after the accounts and administration of the business, Dom is the sales and technical architect specialist, and Stephen is the new technologies and projects director. In their private lives, the business relationships spill over too, with their families having maintained strong friendships.

This strong “teamwork element,” shone through on the Telstra Awards night and it is such a credit to them. They deserved to be nominated and got a big buzz out of it too, which is hardly surprising.

The guys started their business not in a garage, as is commonly reported with start-ups (and it’s too cold in Canberra anyway to work in a garage!). Rather, they started operating from Dom’s bedroom, moving to Stephen’s bedroom, and then to a single room in Fyshwick, rented from one of Nick’s family members. Finally, they moved to their current premises in Belconnen, twelve years ago, which they bought and then expanded as properties in the same building came up for sale.

Their motto, though, is a very sensible “slow and steady wins the race,” which serves them well.

ForwardIT now employs 32 people, has 80 managed service clients and many other contracts. Their earliest clients are still with them, like Bates & Pickering, Financial Integrity Group and Project Coordination run by the very capable Paul and Gavin Murphy. The staff are long-term as well; Rodney Marsh, now a sales manager, started as a service technician and was their first employee, twelve years ago and is still there, along with other long-term employees, like Brooke Murphy, on reception, and Michael Sandberg who’s played a key role in developing new government business over the many years.

So, where to from here? They are looking to buy a building soon as they have already outgrown the one they are in, even having expanded over the years.

It seems that “slow and steady” is a winning formula in business, and strong, highly functional and enjoyable partnerships (though rare), are an enabler of that strategy.

This firm is truly bucking the trends in business!

Më Batterbury - 14 minutes ago
I think 50 is ok but 40 is just ridiculous View
Jazzy Dhooria - 23 minutes ago
You voted them in... Just sayin View
News 11

chewy14 - 26 minutes ago
You do have to laugh at their statements about "being more comfortable" with further changes because of the high Vax rates. T... View
kenbehrens - 1 hour ago
I have no issue with ACT moving to 12+ in its stats. We were only a few days behind NSW who were touting their vax achievemen... View
Feedback - 3 hours ago
Lighting up of monuments in blue to celebrate vaccination rates - How utterly ridiculous. This is a city which now has 80% va... View
Opinion 84

assiduous - 30 minutes ago
$500 per week is not low - it is enough to build a modest detached family home every 10 years. It is a reflection of Australi... View
Peter Jovanovic - 3 hours ago
So if it all gets too hard for the parasitic landlords and their parasitism isn't as lucrative as they hoped they'll just dem... View
tuggeranongist - 3 hours ago
You are mistaken on both of these points. Section 64B(1)(b) of the Residential Tenancies Act makes clear that rent can be inc... View
News 231

Claire Anderson - 41 minutes ago
Daniel, the newer ones really do stop way WAY more abruptly. I too rode the old ones with help of people pulling and never go... View
James Coleman - 58 minutes ago
Hi Kane P-s and Bec Lester , the journalist behind the article here - just about to send you each a DM concerning your storie... View
Brianna - 1 hour ago
It is so good that her family can be there for her. I know her mum will fight like a tiger to ensure that this flying fox is... View
Opinion 4

kenbehrens - 43 minutes ago
Alicia Payne, I guess it comes down to the priorities of the ACT Government. If the Government is so concerned about health,... View
News 42

ChrisinTurner - 3 hours ago
It is interesting that our governments promote densification while at the same time moving government services away from the... View
Property 42

Everyone loves a good pub feed, a refreshing beer, or simply catching up with mates in a laid-back environment. Being...
News 38

@the_riotact @The_RiotACT
The ACT #Integrity Commission's first report is imminent, and the #corruption watchdog will soon have phone-tap powers https://t.co/usBVGpKfEW (50 minutes ago)