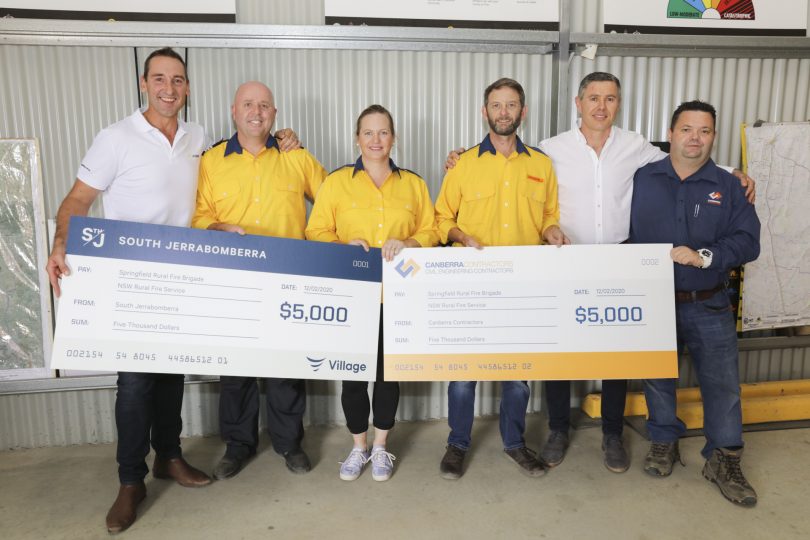 The recent bushfires have led to a wave of generosity in the ACT in gratitude to the fire fighters, and this week two Canberra companies combined to donate a much needed $10,000 to the Springfield Rural Fire Service.

This week, local civil engineering company Canberra Contractors decided one good turn deserves another and announced it would contribute $5000 too.

With a combined $10,000, the two companies handed their donations to the Springfield RFS’s Captain Rod Tarlinton at the brigade shed on Wednesday.

Captain Tarlinton is a veteran fire fighter, with three generations of his family volunteering with the Springfield brigade that operates across Spring Range, Wallaroo, Nanima and Murrumbateman.

He said he knew a donation was being made but it was a welcome shock to see the generous amount.

“It was hard to gather my thoughts when I realised how much money it was – $10,000 means our plans for the future will come about a lot quicker.”

The Springfield RFS is only partially funded and relies on donations for extra facilities.

“As we are a large brigade, we have two sheds, but our second shed was supplied just as an empty shell with a truck. Fortunately, we have a good community who do a lot of fundraising to help with the works. But it costs significant money,” Captain Tarlinton said.

“Money straight to the ground like this means we can get on with our plans without having to rely on decisions further up the chain.”

He said the funds from Village Building Company and Canberra Contractors would go towards the brigade’s junior program and putting toilet facilities into the second shed.

“We started our junior program a few years ago in the hope that we could grow a group of future fire fighters. The program is aimed at 12 to 16 year olds and we will use some of the money for props and training equipment,” Captain Tarlinton said.

Village Building Company CEO Travis Doherty said the donation was a thank you to the fire fighters.

“This summer has been a tough one. The bushfire crisis has seen so many people directly impacted. Thankfully, we have had the amazing men and women of the NSW Rural Fire Service looking out for us,” Mr Doherty said.

“We’re extremely proud of Jason and all of the selfless volunteers. As our way of saying thank you to them we wanted to make a donation that would have an immediate impact at a grassroots level.”

Canberra Contractors Managing Director Paul Macor said he and his board had been looking for an opportunity to make a donation.

“The whole community, either directly or indirectly, has been affected by theses fires, it has been 24/7. We wanted to help but we wanted it to go straight to the ground,” Mr Macor said.

“We have a great relationship with Village building Company. We have been working with them for 31 years and when we heard about their donation we thought what a wonderful way to donate. Jason worked with us before he moved to Village, so it was someone we knew and it is going to a local organisation.”

Captain Tarlinton said recent rain has given the brigade an opportunity to get reorganised and take a breather.

“We need to be mindful that the season extends well into March these days. We are still making sure we are prepared but it is good to have a bit of a break.” 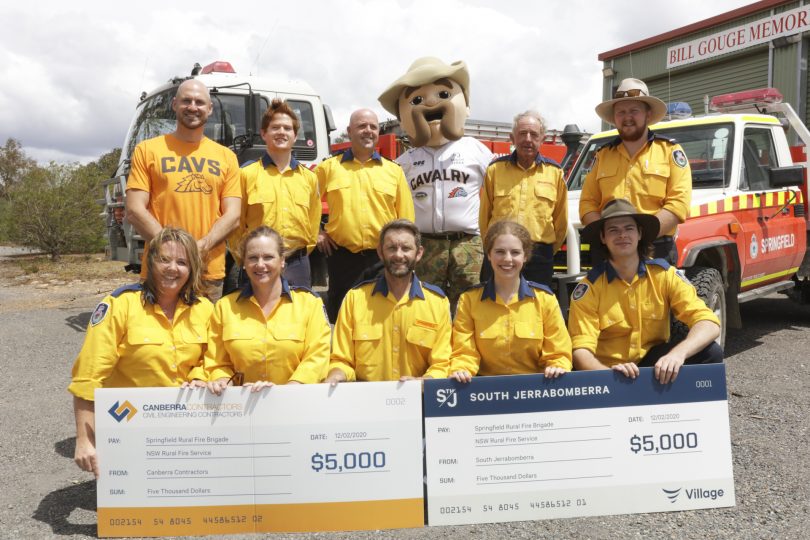 So thankful to these great local businesses supporting our Brigade and the RFS.

chewy14 - 3 hours ago
Kenbehrens, "potentially safer". We are all "potentially safer" if we never leave the house either, but luckily most of us un... View
JC - 3 hours ago
Chewy in this instance it is NSW who is doing something different and did so without consulting or advising the ACT who is im... View
chewy14 - 3 hours ago
You do have to laugh at their statements about "being more comfortable" with further changes because of the high Vax rates. T... View
Opinion 85

jorie1 - 3 hours ago
Hi Assiduous, I do agree that $500 per week is a lot of money - but the majority of that money goes to the ACT government in... View
assiduous - 4 hours ago
$500 per week is not low - it is enough to build a modest detached family home every 10 years. It is a reflection of Australi... View
Peter Jovanovic - 6 hours ago
So if it all gets too hard for the parasitic landlords and their parasitism isn't as lucrative as they hoped they'll just dem... View
News 39

Më Batterbury - 3 hours ago
I think 50 is ok but 40 is just ridiculous View
Jazzy Dhooria - 3 hours ago
You voted them in... Just sayin View
Opinion 4

Robert Cox - 7 hours ago
Bri Woodward families of them! View
show more show less
*Results are based on activity within last 7 days

@the_riotact @The_RiotACT
Ready to get out and about after lockdown? Go for an adventure and check out the NewActon precinct's public #art trail around #restaurants and #cafes https://t.co/yUPQ0HaFq8 (38 minutes ago)