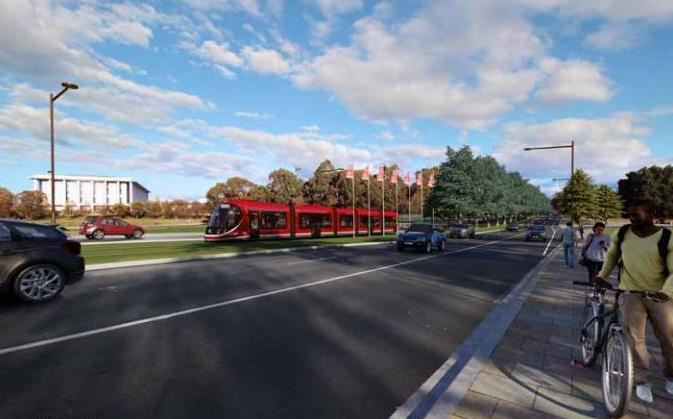 A render of light rail vehicle heading towards the city through the Parliamentary Zone.

Any assessment of heritage and environmental impacts of light rail Stage 2B from Commonwealth Park to Woden should be at arm’s length from the ACT Government and the ACT planning authority, according to two submissions to the federal Department of the Environment and Energy.

Both the Inner South Canberra Community Council and the National Trust of Australia (ACT) have called for the Commonwealth to establish an independent inquiry.

The ISCCC says in its submission on the ACT’s referral of the project to the Commonwealth under the Environment Protection and Biodiversity Conservation Act, that there is a ‘demonstrable lack of public confidence in the outcome and transparency of a range of planning decisions for developments elsewhere in Canberra under ACT control’.

While the ISCCC acknowledges the undertaking from Major Projects Canberra that an Environmental Impact Assessment would be conducted in accordance with both Commonwealth and Territory statutory planning requirements, it says this ACT-based approach would be inappropriate.

“The potential impact on key areas of Canberra and its national capital values is such that it would be wholly inappropriate, and indeed undesirable, that the assessment process is auspiced by the Territory,” it says.

The ISCCC also says it doubts that the National Capital Authority is capable of protecting areas of significance along the route.

“There is significant doubt as to whether the NCA has the resourcing and political support to fulfil its mandate of protecting national capital values in the face of pressure from developers and the ACT Government’s expressed need to raise substantial revenue from sale of public land, much of it public open space,” its says. 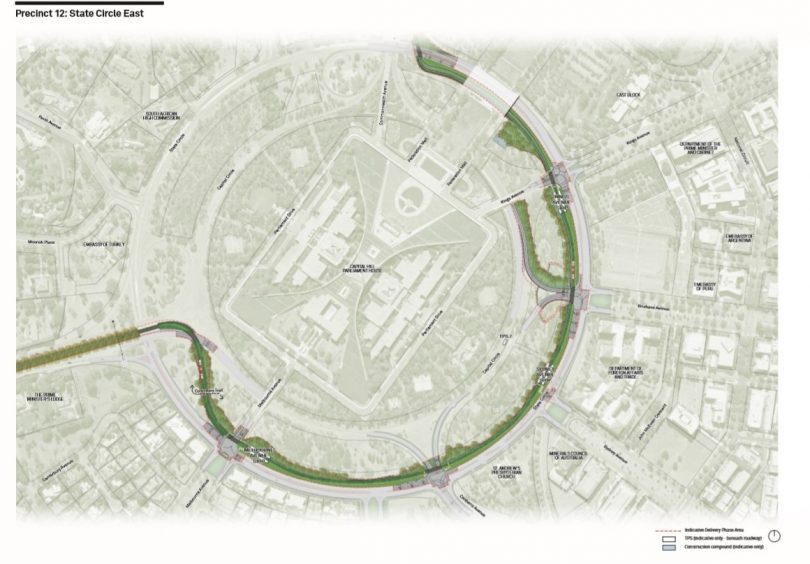 A map of the route around State Circle from the EPBC referral documents.

The ACT Government acknowledges that the heritage and environmental impacts of Stage 2B will require it to be declared a controlled action and an EIA but the ISCCC believes the process proposed by Major Projects Canberra will not be adequate.

“Nor do we believe that it will offer the same degree of transparency and objectivity as could be achieved by an independent Commonwealth public inquiry with the powers and guarantees provided by the EPBC for this
mode of assessment,” it says.

“To ensure full confidence in the findings of an assessment, it should be conducted at arm’s length from the ACT Government and enable a full and public airing of the views and evidence of those many individuals and organisations which will wish to engage in this important process.”

The ISCCC lists multiple areas of concern including possible impacts on the heritage aspects of the Parliamentary Zone and Parliamentary Triangle, and other Designated Areas in central Canberra along the route, including the proposed new bridge structures and modifications; construction compounds; the maintenance of key vistas; the need to avoid overhead wires through the Parliamentary Triangle; traffic impacts; and implications for the built environment and public open space along the route.

ISCCC chair Marea Fatseas said the EPBC Act provided for five levels of assessment, and the ISCCC had selected the fifth one of a public inquiry, given the significance of the impacts.

“This is the one that will ensure greater detail is provided about the route and approaches to different parts of Stage 2B. There will be a need for a much closer look at it,” she said.

“They’re not just simple engineering things, they have implications for the Parliament House setting.”

For example, she expects that in parts of State Circle there will have to be changes to the topography to make it more level, and a section of the line looks as if it will go through bushland between State and Capital circles.

The other issue is how much of the route will be wire-free. “Chief Minister Andrew Barr was quoted as saying you probably only need to have Commonwealth Avenue wire-free. We don’t know where is being proposed wire-free or not wire-free,” Ms Fatseas said.

The two main points were the route and to what extent it impinged on the curtilage of Parliament House and other heritage places, and the extent of wire-free travel area along the route, she said.

National Trust (ACT) president Gary Kent says in its submission that the project should be assessed in a transparent manner.

“The ACTNT asks that the assessment take the form of an independent public inquiry established by the Commonwealth Minister under Part 8, Division 7, of the EPBC Act, with all the protections and procedural guarantees provided for therein.

“We do not support the recommendation of MPC that the assessment take the form of an Environmental Impact Assessment (EIA),” he says.

“In our view, an EIA would not provide the same opportunities for community and stakeholder engagement and public airing of the key issues, about which there will likely be many diverse and strongly-held views.”

So the ACT Government, after successfully completing Stage I to a high standard, on time and under budget, should be forced to step aside entirely while the openly-declared Canberra-hating Federal Government does as it pleases, when it pleases, on Stage II for Canberra citizens?

ACT voted in 2016 to pay for and use light rail, so butt out. In what other Australian jurisdiction would such undemocratic nonsense even be suggested? Did the Feds get the casting vote on the Lilyfield tram line or the Mandurah train?

This is just poisonous bias and patronising grandstanding by the unrepresentative ISCCC, in abject terror of rates bills reducing their wealth. With treacherous ‘friends’ like these, Canberra has no need of external enemies.

Please help me here. I am not sure if you are being sarcastic, or you really believe what you have typed.

Stage 1 is completely different from stage 2, as the latter will go through the heart of the national capital. I emphasise “national”, so it’s not just about what we in Canberra want, and the comparison with Lilyfield and Mandurah is irrelevant. In any case, the ACT Government itself said in its submission that the impacts will be significant and will need to be assessed. I doubt our suggestion of an independent inquiry would add any time to the project, because our submission was about stage 2b from Commonwealth Park to Woden which probably isn’t due to commence construction until about 2023. We didn’t lodge a submission in relation to the earlier stage 2a which will go from Civic to Commonwealth Park, and which will be constructed first.

The image at the link suggests that only heritage class trams are allowed to rattle past the Melbourne Parliament building.

It won’t be a problem in Canberra as the Lake to Woden stage will never happen.

Not sure about the tram but the overhead wires aren’t “heritage class”. Doesn’t seem to upset the Victorians though, they’ll use it all the same. And, as to “rattling” past the building the photo didn’t come with a sound track, so it could’ve been roaring, gliding or snickering.

Two questions: 1) What environmental and heritage approvals were done when all the roads encircling Parliament House were built? 2) If having a light rail or tram system outside a Parliament building is such a dreadful thing, why are they right outside the Parliament House in Melbourne (a building of much more heritage significance than the federal parliament building). http://static1.businessinsider.com/image/59cd43f7f37c8d186d22e540-1200/melbourne-australia-is-home-to-the-worlds-largest-tram-network.jpg

1) We could probably find the answer to your question by going through Archives but I’m guessing that when Parliament House was built they would have considered its landscape setting, including surrounding road infrastructure, carefully.
2) It could be that a light rail near Parliament House may not be a “dreadful thing” but that’s why the route and proposed landscaping need to be looked at carefully, to make sure there will be a good outcome. From googling, it seems the tram outside the Victorian Parliament House went in about 25 years ago. I’d say there have been technological improvements since then. For example, both the new Newcastle tram and the George Street section of the new City to Eastern Suburbs Tram in Sydney will be wirefree.