Calling all NIMBYs: RZ1 dual occupancy coming to the block next to you 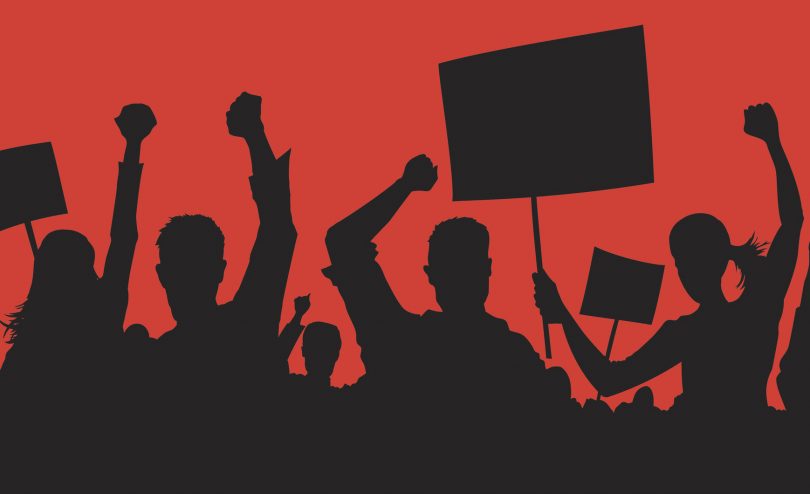 Non-binary the barricades! RZ1 dual occupancy coming to the block next to you. This is a call to arms for the workers (public servants) of the republic to rise up.

Let’s face it… Canberran’s are a pack of NIMBYs. For example:

Which brings me to the ACT Government’s current, Housing Choices Discussion Paper, released in November 2017, which is currently open for public comment until 9 March 2018.

The Socialist Minister for Planning and Land Management in the CBR, Mick Gentleman, states in the discussion paper’s ‘message from the Minister’:

Maintaining the character and amenity of Canberra’s suburbs is fundamental to maintaining Canberra’s reputation as a garden city, and as such, proposed changes in the RZ1 zone are expected to be modest.

Comrades, this is the ‘red wedge’. Non-binary the barricades! This is an admission that there will be changes. This is a call to arms for the workers (public servants) of the republic to rise up and … well you get the picture.

But wait, there’s more. Hidden in the Commissariat for Environment, Planning and Sustainable Development’s carefully crafted list of 10 questions they are seeking feedback on, is this little gem:

What changes would you support in the RZ1 zone to improve housing choice?

And these responses will lead to ‘potential legislative and policy options’. What more evidence do you need? I can feel the revolutionary fires starting to flame-up as I type.

So, what is this RZ1 all about? Well as you are aware Canberra has five residential zones – and comrades, RZ1, low rise and low-density housing – mainly single residences, makes up 81 per cent of the ACT, that means you and me.

The biggest setback for establishing a socialist kibbutz, or commune, on your large RZ1-zoned quarter-acre block in Ainslie, is that they can’t be separately unit titled and therefore cannot be sold separately. The ACT Government changed the laws and eliminated the ability to strata title dual occupancy developments back in 2013.

But, fellow NIMBYs, it is one thing to be able to establish a dual occupancy on your land and another to be able to profit from it – also, I’m pretty sure most of us would like to maximise the value of our current property by doing a dual occupancy development, then sell them both and go and live somewhere much quieter – who wants to have their neighbours double over night? Not me, I can assure you (although my current neighbours are fabulous).

So, what changes to RZ1 zoning, do battle-scarred apparatchiks, from the real estate and strata industries, think are warranted – if any?

“There is a real need to diversify some of the current supply of properties in the Canberra market. Enabling RZ1 zone property owners to undertake dual occupancies with separate unit titles would benefit the whole community,” Chris Miller, Managing Director, Vantage Strata said.

“Townhouse/terrace style developments are by their nature, limited in supply due to being land-intensive and restricted by current zoning, pushing them almost exclusively to greenfield suburbs.

“In terms of pricing and values, they sit between the apartment market and single residential market, and offer a mid-market pricing alternative for first home buyers/small families and downsizers,” Chris stated.

“All I have been advocating for is a common-sense return to the policy that existed pre-2002. Pre-2002, anyone with a block over 800m2 regardless of the zoning, could develop a strata titled dual occupancy, or a tri occupancy on blocks over 1400m2.

“The controls in place were simple, being a maximum 35% plot ratio, which encouraged single level, age-in-place-type housing amongst gardens with trees,” Dave explained.

According to Dave, there are approximately 100 of these dwellings in Ainslie, all built before 2002 and ‘yet the sky hasn’t fallen’.

“Ainslie has maintained its status as a leafy almost idealistic reminder of what the garden city was intended to be, which is nothing like great swathes of new suburbs in Gungahlin and Molonglo are shaping up as.

“The critical issue, for the cul-de-sacs and back streets of ‘Old Canberra’ RZ1 zones, is that sensible redevelopment has been in a politically induced coma for 15 years, and it’s time to bring it back to life. Hopefully Mick Gentleman has the foresight and gumption to undo the poor decisions of the past,” Dave stated.

So, there you have it NIMBYs. Just like public transport, methadone clinics, and public housing – being able to do a dual occupancy development with separate unit titles will be good for the community – just NIMBY, right?

Do you think there should be changes to Canberra’s RZ1 zoning to enable dual occupancy developments with separate unit titles? Let us know by commenting below.

I think you can already stay there in a ‘little house’ i.e. caravan …

I would suggest that people have a look at the placement of light rail stops to determine the planning agenda of ACT Govts land sales. For example, have a look where the EPIC stop is. It isnt at the entrance. It is 300m towards Mitchell.

ACT Government “surveys” so often remind me of the old joke about someone breaking in to the Kremlin and stealing next year’s election results….but on the detail of this one, densification is obviously going to happen one way or another, so that being the case, why not allow separate titles for dual occupancies where that is physically practicable? Strata management seems to be a very lucrative industry around the town, but in cases where it is not necessary for practical purposes, owners and renters should not be burdened with the associated costs and bureaucracy.

Noted comrade. It is essential that ‘centralisation’ take place as soon as possible …

Hi Russell, ( Russell McArthur) Re: that development in Scullin? is that in a nice quiet little back street or cul -de -sac, or is it on Belconnen Way? Oh… It is on Belconnen Way !! When you comment “that it isn’t compatible development” I fully agree!! Who the hell thought zoning Belconnen Way as RZ1 was a good idea? and just 5 units?? on the main arterial road connection to the City

“Compatible development” on a main arterial road- might see a zero after the “5”..

You watch the ACT Government try cash in on dual occs (if they aren’t already) like they do with larger developments by charging $30K per unit for ‘water supply’.

Tim Benson I’ve got no problem if it’s justified but I’ve got no information to suggest it is. Maybe it should be called something else to give it legitimacy

How about a ‘licence to print money’?

Haha – as long as it’s used for the greater good. What pisses me is how ugly most of the new developments are

“Canberras reputation as a garden city”? Are you kidding?The place is derelict of any nice or cared for gardens on either private or government land. The area around Belconnen Mall is a prime example three foot weeds growing out of footpaths, half dead and unkempt hedges. Now places like Lawson have so many properties squeezed in them there’s barely room for one tree. What a joke.

Comrade, who would want to live close to civilisation, ammenities and work opportunities – ha, it will never catch on …

It should be at least 850m2 upward otherwise there is no room to plant a decent tree and have a backyard.

A lack of backyard is an easy selling feature these days, I like yards, but they certainly are not a priority in a development, goes for trees as well.

Yep future slums with obese kids no where to play or be healthy in!

Brent Griffiths No arguments here, but I don’t dictate what the market wants.

Of course there should ! Especially since I sold a perfectly good subdividable block 5 years ago for far less than if I had hung on and waited because I’d totally given up on the overly strict planning laws ever changing (and I was a town planner at the time).

Be careful what you wish for there is a development in Scullin where a developer is trying to get around the unit titling restrictions to put 5, two storey units on a 900m2 block. Not what I would call a compatible development.

Compatible with the rest of the suburb in RZ1 which is dual occupancy or single residential blocks. RZ2 is where increased density is more appropriate not RZ1

Such a change would mean older Canberrans who can’t afford their tripled rates bill could stay in their homes. The tricky part is going to be ensuring good design.

Instead of wasting time n resources, lets build on what we already have…xoxo 😆

No problem with dual occupancy, but can we please require developers to include sufficient parking space? Some of the streets are starting to look like parking lots

Yup – comrade neighbour has at least 5 cars coming and going. Think my next fortification will be a massive gate …

They will do what they want to regardless…..👀💅🏻

They is you comrade …

Dual occupancy on 900 Sqm block in inner suburbs will be far better than all the new fringe suburbs. I will surely choose them over the compact living in the new suburbs.

What – where will I put my chicken run, vegetable garden and fruit orchard – heresy!!!

Tim Benson just need to look across the boarder.