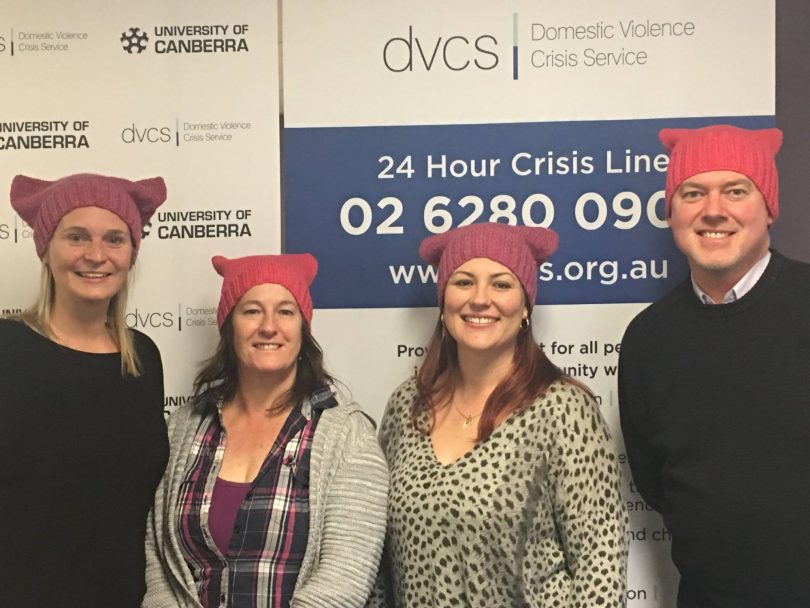 As Trump was sworn in, the US was swept up in one of the largest protest movements ever with women taking to the streets. Washington was awash with pink – women wearing knitted ‘Pussy Hats’ boldly reclaiming the ‘pussy’ term and calling for better rights for women.

Now the pussy hats are here in Canberra, thanks to Stephen Lawton who has founded The Pussy Hat Project Canberra. According to Stephen, “pussy hats are a symbol of power and a uniting force for those who want women & girls to live their lives free of violence.” Although only in its infancy, the group already has hundreds of supporters on its Facebook page, and for good reason: the movement has become a rallying cry for women everywhere. I even have feminist friends in Taiwan who have been knitting the hats and marching while wearing them for months.

The hats can be worn by anyone, male or female, and with historic Canberra cold weather and snow on the alps expected soon, they are the perfect way to keep warm. “I’d love to see Canberra covered in pussy hats and kept warm and all for a good cause,” said Stephen. Expect to see a wave of pink pussy hats as the best fashion accessory this winter. And other colours – they can be ordered in colours not just pink.

The hats are not just a cute symbol – they are also being used as a fundraiser for Canberra’s Domestic Violence Crisis Service (DVCS) to best help protect and empower women and girls facing domestic violence. The hats sell for $15, and each one comes with a fabric label sewn into it with the DVCS crisis number, webpage and the phrase “but she persisted”. The phrase has become a rallying cry for the feminist movement associated with the pussy hats, in reference to US Senator Elizabeth Warren’s unsuccessful attempt to read a letter from Martin Luther King’s widow on the US Senate Floor. She later recorded a reading on Facebook, where it was viewed over 8 million times in 24 hours.

Stephen, himself a keen knitter, was motivated to create this project through knowledge of the terrible impact of domestic and family violence. In Australia on average one woman a week is killed by a former or current domestic partner. “In contrast,” said Stephen, “only six people have been killed in Australia in terrorism related events and of those three were investigating the terrorism acts.”

The hats are made by volunteers, and anyone can make them. In fact, Stephen currently has more orders for the pussy hats than supply to fill them so he would really love for Canberra’s knitting community to get behind this initiative. Stephen said that since joining Canberra’s knitting community he has been impressed by its willingess to assist charities. Trove Canberra is supporting this initiative, and knitters are welcome to drop off finished Pussy Hats at their Garema Centre shop. “What I love most about the project is the way it takes typical symbols of femininity (knitting and pink) and makes something powerful,” said Kristen from The Granny Square Conspiracy, one of the organisers of Trove’s recent World Wide Knitting Day. “For me, it symbolises that we don’t need to be less female and more male to be powerful, but we do need to organise and come together.”

To purchase a hat or to inquire about knitting one, please contact Stephen Lawton at pssyhatproject@gmail.com, or message via the Pussy Hat Canberra Facebook page.

Patrick Barrett - 51 minutes ago
Dylan your fault View
Sonia Irwin - 5 hours ago
Been watching this as a client. Gotta say a bit nervous is an understatement View
Justin Newbury - 5 hours ago
Whoopsie. View
News 15

Evan James - 4 hours ago
Well said, Tim!✔ View
chewy14 - 6 hours ago
"And the federal border force was happy to let other players through, on the same exemption, before ND arrived." Who were the... View
LietDao Do - 6 hours ago
… I don’t want to see/talk about him anymore… let it past. View
Opinion 144