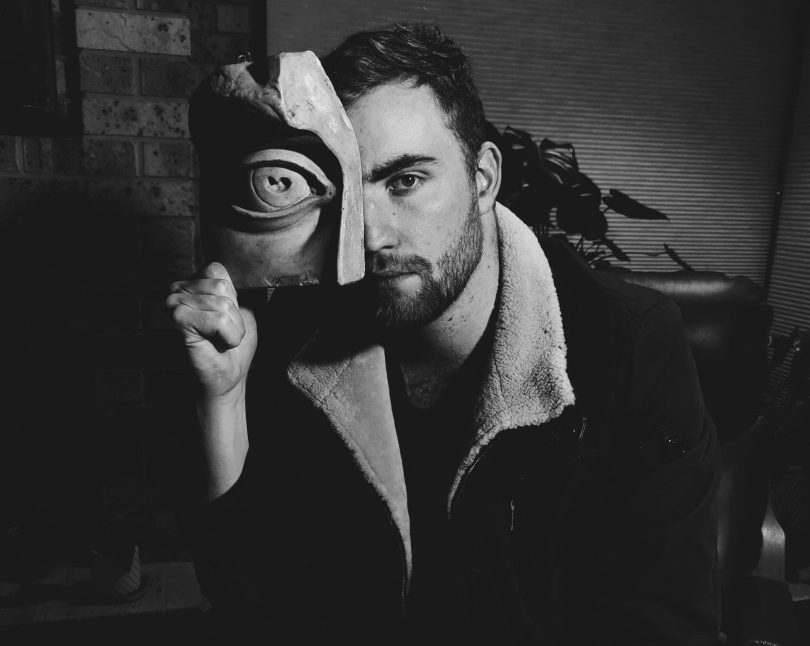 Genie Roberts set to work while he was unable to busk, creating his debut EP. Photo: Genie Roberts.

Canberra busker Genie Roberts who recently released his first EP, is one success story to come out of the ACT Government’s HOMEFRONT funding for Canberra artists.

One of more than 370 applicants for the funding, Genie and 65 other artists received up to $10000, the funding designed to recognise the impact of COVID-19 on the arts sector and help local artists continue to develop their practices.

Busking when the pandemic hit, Genie, who was born as Eugene Robertson, knew he was in trouble.

Not only was he physically not allowed to go and sing in the local shopping centres, people were also being encouraged to limit their use of coins and cash.

Having been busking for two years, Genie says it can be quite a lucrative way of making money although there’s a myriad of complex factors which affect how much he can make of an evening.

Obviously, busking is a weather-dependent activity but Genie is also at the mercy of other factors that are out of his control like whether or not there’s been a bad news event.

What he can control is where he busks and when.

It’s been a process of trial and error for Genie to have worked out the best places and times to busk.

“I think 4 pm to 6 pm is the best time, and find I have more luck on a Thursday and Friday,” he explained.

He attributes this to people getting paid on these days or generally being happier as the weekend approaches.

Unsurprisingly, it’s the opposite on a Monday.

“What you’re looking for is the mixture of enough foot traffic to make it worthwhile, but small enough that people are more likely to get behind supporting a local artist,” he said.

Another thing he avoids is if people are begging, as he says the thought of asking for money next to somebody who needs it just to scrape by is unthinkable.

With COVID-19 shutting Canberra down last year, along with the sudden loss of income, being unable to perform left him at a loose end.

“I did have to ask myself what could I do during the time that I couldn’t sing in public that could productively benefit my career,” Genie explained.

After hearing about the HOMEFRONT funding through his social circle which was designed for those artists who had suffered a sudden and dramatic loss of income due to pandemic restrictions, he decided he was the perfect candidate.

The $9000 grant he received was largely spent on recording and production equipment as well as getting the tracks professionally mixed and mastered.

Genie said it was a difficult process to turn his usual busking tracks into fully produced compositions. He generally performs using a loop pedal which he then layers with roots, reggae and blues influences, but quickly realised that the songs needed to be dramatically reworked in order to stand alone as you couldn’t have the same chord progression over and over again throughout the song.

He says the self-produced EP Lifeless Things is an exploration of self-discovery and uncertainty that combines roots, reggae, alternative rock and contemporary blues.

“Before HOMEFRONT, releasing my first self-produced EP felt out of reach. The music that I wrote truly opened my eyes to what I am creatively capable of,” he said.

For the moment due to health reasons, Genie is unable to perform, but says he hopes when he returns to the stage he will begin gigging at pubs and bars around town as well as returning to the streets as a busker.

Check him out on Spotify.