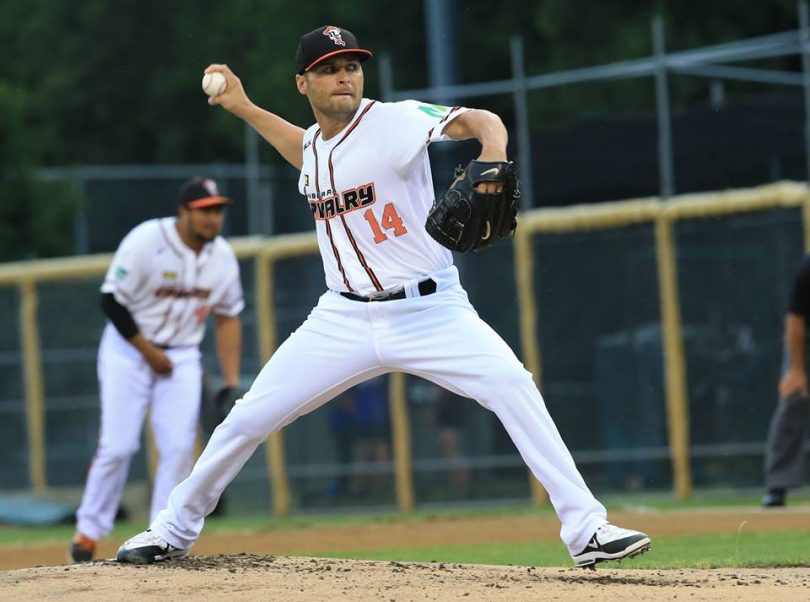 Brian Grening in action at the ABL Championship series against the Brisbane Bandits. Photo: Supplied by SMPIMAGES.COM/ABL Media.

Brian Grening has called time on his career after leading the Canberra Cavalry to a win in the first game of the Championship Series last Friday night (9 February).

In a press release shared by Canberra Cavalry, Grening said that last Friday’s match was unforgettable for many reasons.

“I couldn’t have thought of a better way to end my career: in Canberra, in the Championship Series, in front of the best fans in the ABL. For many reasons, it was one of the best nights of my career and I will never forget it.”

“There is something about the Cavs, the Fort and Canberra I can’t explain. Here players exceed their talent level, fans connect with players like nowhere else, a small stadium feels huge, the old dirty clubhouse doesn’t matter and the desire is never greater.”

Grening was part of the team who won Canberra’s lone Claxton Shield in 2012-2013 and played a vital role in the Cavs winning game one of the Championship series.

The 32-year-old said the crowd at the home finale last Friday night provided a lasting memory.

“One lasting memory I’ll have is when we made the first out in game-one last Friday on a pop-up foul and you guys erupted in cheers. I thought to myself, ‘Wow, they really showed up for us tonight.'”

“I’d like to say thank you to everyone for making me part of this community and sharing so many special memories.”

“I grew up playing in Oregon, went to school in California to play and played for nine different professional teams in five different countries but I will always consider the Canberra Cavalry my home team. Thanks for everything Cavs.”

Shannen McCann-Geiger - 15 minutes ago
The wife looks super happy to be there View
Will Scott - 8 hours ago
Pat Smith he always has loved the tale of the bushranger View
Alexis Nerrida - 9 hours ago
Ginger Oliver chris hemsworth is cool but it’s no local legend/matilda’s star ellie carpenter... View
Opinion 15

tuggeranongist - 9 hours ago
All things being equal, I would prefer to deal with a large institutional landlord than an individual one. I suspect many oth... View
Redgum - 11 hours ago
Better Renting is correct on one point only. The decision to invest in a rental property is a business decision. Investments... View
Community 27

kenbehrens - 11 hours ago
Government charges contribute towards the high cost of rent in Canberra. It's Government policy to increase Rates, to a level... View
Geoffrey Bell - 14 hours ago
Mandy Truman $206 cheapest share place i could find. https://www.allhomes.com.au/share/search?region=canberra-act&district=gr... View
Mandy Truman - 14 hours ago
I'm full time uni and I got made redundant from my job and then got a casual job but haven't had work for 10 weeks. I would h... View
News 246

@the_riotact @The_RiotACT
If you love golf, this family #home is close to the Gold Creek #golf course, with views over the #fairways and beyond. Give the huge 80s home a little spruce up, then relax on the balcony and watch the afternoon golfers tee-off https://t.co/sVglXTIFMt (12 hours ago)