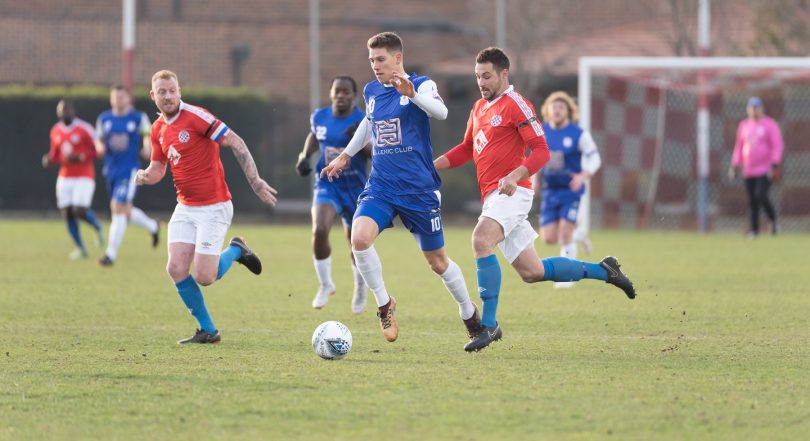 All NPL1 clubs attended the meeting, including representatives from Canberra FC and Canberra Olympic. Photo: Supplied.

Canberra football clubs have come together to address the “dysfunctional and fractured” environment prevalent in Capital Football, saying a lack of transparency and communication from the governing body is hampering the sport’s growth.

Over 20 ACT football clubs, including clubs from NPL1, NPL2, NPLY, community and junior clubs, along with referee representatives met on Monday night (11 February) to form the Congress of Canberra Football Clubs.

The congress met to discuss the state of football in Canberra and to share their concerns about Capital Football, saying the governing body’s lack of consultation and pro-action is “hampering positive football outcomes”.

Capital Football had a tumultuous 2018, with refereeing abuse plaguing local competitions and concerns around the new relegation and promotion system. Clubs believe their concerns and grievances have fallen on deaf ears, with many club officials accusing the governing body of sweeping issues under the rug and ignoring the problem.

Woden-Weston Wanderers president and congress convenor Steve Rohan-Jones said clubs are frustrated with Football’s dysfunction and fractured environment and is calling for Capital Football to start listening to its clubs, be more transparent and start collaborating with its members.

“I have spoken to heaps of people across Canberra involved in football and listened to their concerns,” he said. “What we need is leadership that addresses a collaborative and engaged approach, we need openness and transparency, and we need better communication from Capital Football.

Rohan-Jones said the strong turnout to the first meeting showed just how concerned clubs are.

“On top of the 20 plus clubs that attended, we had a number of clubs who took the time to write to us to say they couldn’t make it,” he shared. “I was really thrilled that Riverina Rhinos, who are four hours away, saw how important the meeting was and arranged a representative to attend the meeting.

“Capital Football has a fair proportion of their constituency saying that something is broken and this is how they intend to fix it. We want them to come along for the journey.”

ACT representative of the Association of Australian Football Clubs and former Tuggeranong United president Jon Thiele attended the meeting and said the key message that needed to be sent to Capital Football was for them to start listening.

“Capital Football is there to serve people and its clubs. They don’t need to agree with us on everything but they need to stop giving us lip service and start listening to Canberra clubs,” he told Region Media.

“There is close to 100 years of experience in each club for Capital Football to tap into and listen to, which they aren’t doing.”

Ota Save - 2 hours ago
Sue Sutton No worries Sue. Happy to help ❤️ View
Sue Sutton - 2 hours ago
My Mum has wonderful neighbours who have been helping keep her lawn in check. Thank you Ota and family xx... View
Bill Gemmell - 3 hours ago
Barbara Eglitis I was wondering how long it would take. Seriously, I had the Fowles St Park project in Weston in mind. Sugges... View
News 33

kenbehrens - 3 hours ago
A few years ago when we were visiting our son in Sydney, there were blankets and items of clothing under shelter on the stree... View
jwinston - 3 hours ago
harcm said “tim_c – what a load of rubbish you talk. What if your schooling was completely disrupted by domestic violence... View
Acton - 3 hours ago
The money you are giving out of misplaced guilt to a street beggar is just funding their drug, smokes and/or booze addiction.... View
News 1

ChrisinTurner - 3 hours ago
Living in the inner north we now have to start planning to leave Canberra during SummerNats. Already the mufflers are being r... View
Public Sector 170

Kerry Apted - 5 hours ago
excellent! View
Samantha Freeman - 7 hours ago
Tell that to the Federal Govt. No one has moved to a hybrid model, only state Govt View
Grant Rule - 7 hours ago
It's only a rought if you're not involved typical Labor government looking after there own standard. View
News 20

TimboinOz - 5 hours ago
I am NOT happy that this fundamentalist 'Christian?', bible-inerrancy 'school' exists, at all. That it receives federal and p... View
Opinion 15

Tim Mitchell - 7 hours ago
The joint A-Leagues men and women trophy really strengthens Canberra's bid. Would be strange having Canberra as the only team... View
Breaking 1

Finagen_Freeman - 7 hours ago
So sad for family and friends. View
News 10

Linda Stapleton - 9 hours ago
I see the tram is already being blamed for this issue ... great to see some people have a one track mind. It makes it easy to... View
News 6

@the_riotact @The_RiotACT
#Santa on a flat-bed truck, Basil Fawlty on the stage, a basketball battle, and a picnic for pooches are just some of the things happening in the #capital this week https://t.co/aWkQ2BvTSw (29 minutes ago)

@the_riotact @The_RiotACT
A rehab #clinic specifically designed to assist #COVID-19 patients manage the ongoing symptoms of the virus is being set up at the University of Canberra Hospital https://t.co/WvD1IRUJRf (2 hours ago)