The Canberra Raiders will be looking to put last week’s 34-18 loss to the Newcastle Knights behind them when they take on the West Tigers on Saturday evening in Sydney. Photo: File.

Tonight’s encounter with the West Tigers at Campbelltown Stadium gives the Raiders the chance to get back into the winner’s circle after their first defeat of the season against the Newcastle Knights last week.

While the Raiders will seek to make their record 4-1 this campaign on Stuart’s landmark day against the 2-2 Tigers, former Raider Joey Leilua will be out to impress in his first showing against his former club.

Leilua spent five years in the nation’s capital and he became a fan favourite for his dominating presence in the centre position.

You can expect the former Raiders centre to talk a bit of smack and chirp away at his former teammates for the full 80 minutes.

Stuart made it clear that there is no rift in his relationship with Leilua despite the 28-year-old leaving the club for the Sydney-based outfit.

“Joey and I talk once or twice a week and he’s always saying ‘g’day’ so we have a great relationship,” Stuart said. “It was only just last week that he was telling me that he was the fittest outside back at the Tigers and he’s enjoying himself out there so he’s in a good headspace and enjoying his time there.”

Despite 400 games being a milestone few coaches will reach, it almost passed Stuart by.

“Craig Bellamy called me two days ago and told me [about the milestone], I wasn’t aware of it,” Stuart mentioned.

“It has come as a bit of a surprise. I certainly appreciate the opportunity that Nick Politis and Phil Gould gave me at the Roosters years and years ago. Fortunately, I have had some longevity in the game as a coach. It’s something I take very personally and enjoy doing.”

Despite looking forward to his milestone, Stuart was critical of the side’s poor defensive effort against the Knights.

“We needed to get back into training and take a look at the review footage and get through what we necessarily didn’t want to go through because it was a pretty ugly review, but we got through it professionally and had a very honest look at it. We moved forward onto our session on Wednesday and hopefully we will be a better football team this weekend.”

Raiders fullback Charnze Nicoll-Klokstad is confident his side can return to its winning ways against the Tigers and is looking forward to facing his former teammate.

“I expect Joey to come out and have a big game this weekend,” Nicoll-Klokstad said. “Everyone has spoken about how good he will be once we play them. I know he will be doing his best to get himself right for this match and I’m sure he will play a good game.

“I think any player that leaves a club has a point to prove. They want to let the club that they left know they missed a gem and he’s a great player.” 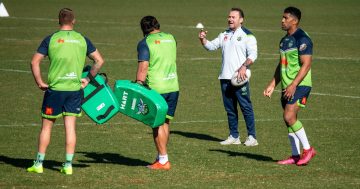