A true mark of fame, Taiwan’s NMA TV are covering, in their own inimitable way, the Joel Monaghan saga.

UPDATE: The Canberra Times has a miserly snippet saying Monaghan is going to try to resign rather than be sacked and wants to be able to play again in Australia in the future. 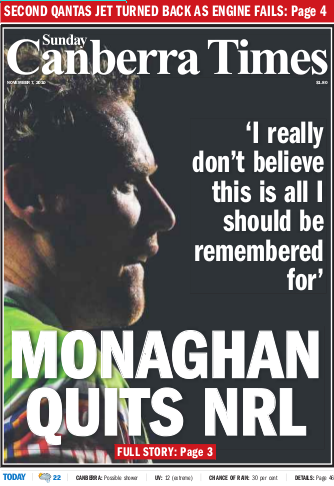 Further Update: New Zealand’s Nelson Mail has better coverage. We’ll have more on the Canberra Times response to this story on Monday.

The plot thickens: The SMH reports that Terry Campese is leading a player-power charge to keep Monaghan at the club.

The Others: The Herald Sun informs us that the other players involved are being looked into while the London Harlequins are reportedly keen on his services.

Nothing on Paper: Monday morning on 666 reports that there’s no paper offer from Monaghan or his management in at the Raiders.

And so we wait: ABC Radio reports that there will be no decision until the board meets again tomorrow. 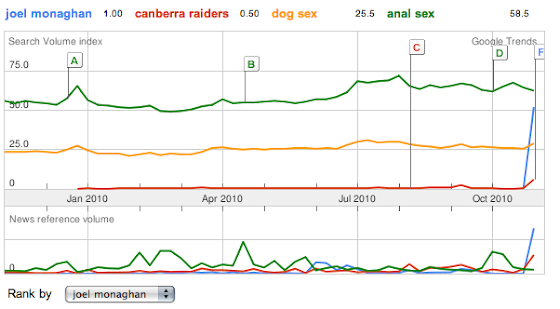 Thanks to Skidbladnir for digging up this data in the comments:

According to Google Trends, Joel Monaghan is responsible for the most recent surge of interest in dog sex, and also searches for the Canberra Raiders.

Joel Monaghan is apparently actually more popular than dog sex (for which he is now the posterchild, anyway).

That’s quite an achievement.

was shown the other picture of him with the dog.

Other?
…
Have further photos leaked, then?

On the other hand, some friend he has, surely the so called friend would have known what he was doing putting the pic’s on twitter and YouTube!!!

Oh no! was shown the other picture of him with the dog, yuk, the dog licking his penis, he must have poured beer over himself!

So The Canberra Times is wrong again. “Monaghan Quits NRL”. No he hasn’t. Were all those supposed “quotes” from Monaghan in the story fabricated as well? Once again proves why the Crimes has no credibility whatsoever.

So every news story in that publication is bollocks? With a huuuuuge call like that, you must be Darrell Eastlake….

Well, for some the issue is that photos were taken of players doing stupid things, and would prefer to have bad news bears shot.
EG: “Canberra Raiders Club is deeply conerned at the circumstances in which one of our players was caught in such a compromising position [namely: with his pants down and his cock in a dog]. Social media is dangerous, and if it had not been around this incident [anybody being aware that Joel Monaghan has pro-canine ahould never have happened.”

For others the issue is the people involved in the event itself.
EG: “Rugby league players do stupid things after the season to celebrate [such as, but not limited to: heavy drinking, lighting farts on fire, human-canine relations, etc], and normally nobody cares. Why crucify Joel Monaghan for what he does with some drinks in him [such as, but not limited to: lighting farts on fire, sticking his cock in a dog]?”.

But for others still the issue is that there are otherwise rational adults trying to make excuses for adults sticking cocks in dogs, or otherwise excusing rugby league players from the rules of society, because they’re apparently in a special class of their own.
EG: Players are using [Mad Monday\alcohol\they’re just incomprehensibly stupid] as an excuse for bad behaviour, and are getting away with it. The bigger issue isn’t that anybody took photos, nor that they were drunk at the end-of-season bender when the photos were taken,, the issue is that these people thought that Joel Monaghan with his pants down and sticking his cock in a dog was acceptable.

Translation: Come elements of society prpose that rugby players aren’t a special breed who react to harmful substances vastly differently to normal adults. Nor are they performing a critical task which makes this behaviour essential to society’s existence. Perhaps society could stop thinking of them as such, and letting them make excuses for their peculiar behaviours when shitfaced. They are, afterall, fellow human beings.

The photo is just what gave this most recent debate its momentum.

The issue is more the existence of a photograph, rather than the incident.

If that’s the case, the existence of a photo is not actually Monaghan’s fault, haha.

Given some of the other antics that have been tolerated by players from other NRL clubs, I can’t believe the number of people calling for Monagahan’s head. Erm, so to speak.

Yes, what he did was stupid, naive, foolish and I agree that it was a disgusting act. But he has been strong enough to stand up and accept responsibility without offering any excuses. Plenty of other boneheads have shamed themselves and the NRL and lived to tell the tale.

I’d suggest if this happened during the regular season then enough column inches would be spent covering the weekend’s games that level of scrutiny, while still great, would be less than it is now.

The issue is more the existence of a photograph, rather than the incident.

So The Canberra Times is wrong again. “Monaghan Quits NRL”. No he hasn’t. Were all those supposed “quotes” from Monaghan in the story fabricated as well? Once again proves why the Crimes has no credibility whatsoever.

I reckon he should stay. He might be a dog lover, but he’s our dog lover.

He could always try doing a “Rebecca Loos”…

“…but do they call me Stavros the boat builder???”

He will also be remembered as an animal lover!

I think Joel has captured the crucial difference between “should” and “will”.

“I really don%u2019t believe this is all I should be remembered for.”

No, of course not…

… you should also be remembered as the crazy footballer who preferred a canine over the veritable smorgesboard of football groupies who no doubt trail your crew after games. Admittedly, the difference between the two species is less apparent after they’ve had a third Vodka cruiser, but still!

I really don’t believe this is all I should be remembered for.

Don’t like NRL, Raiders supporters annoy me, never been to a match, and the only thing I know about Joel Monaghan is that he f&$ked a dog.

But then I LOLd.

Shoddy journalism. Joel wasn’t the one facing the sack.

He would have to be a Canberran lol

Buck Johno - 4 hours ago
From what I remember of night rider busses it was only over summer. View
PE TE - 12 hours ago
Sean Bishop but the Uber rapes have increased View
Kim Rumble-Kozjak - 22 hours ago
Jacqleequack it was all good fun until the two hour wait in the cab line, in stilettos, without a jacket in -2 🥶❄️ View
Property 28

Lihuan Panda - 10 hours ago
from the conversations and interviews, I think some players chose not to turn up for the briefings and missed out on informat... View
Hugo Walker - 13 hours ago
Penny Ford But isn’t he rich, famous and self-entitled? Surely that should persuade the authorities to cave in to his tantr... View
Pia Kivela - 16 hours ago
Personally we are in a pandemic so we should not be having this tournament View
News 5

Colleen Alchin - 21 hours ago
This situation is appalling! Forty minutes from the national capital and you need to buy bottled water to drink and wash clot... View
Tegan Gilchrist - 1 day ago
Amy LD and the clothes!!! Swapped out all out white sheets for greys. Blazer ruined. I now fill up bottles of water from my p... View
Community 1