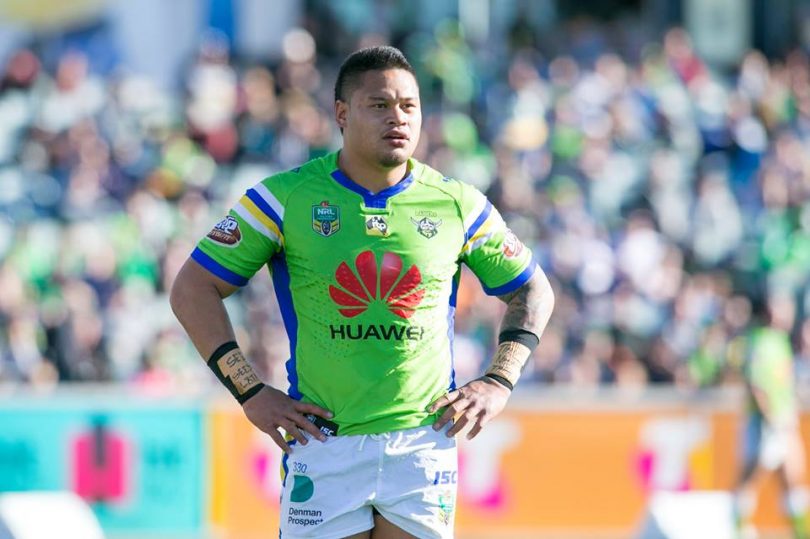 Joey Leilua said that every position in the team is vulnerable, including his own. Photo: Supplied by Canberra Raiders.

In midst of doing all the daddy duties that come with having a newborn, Canberra Raiders centre Joey Leilua is putting in his 100 per cent on the training ground, getting ready for the 2018 season.

Last week (Wednesday 14th), while the Raiders were at pre-season camp on the Sunshine Coast, Leilua’s partner Tiana gave birth to his second son, LaDainian Valentino.

Using the same mentality that he uses with his teammates, Leilua has been helping at home without whinging.

“If the missus needs something, I go do it, no complaining. I’m used to changing nappies now, it’s a tradition that I always change the first one when they are first born.”

The Samoan international said that every position in the team is vulnerable, including his own, as the side gets ready to face the Gold Coast Titans in round one on March 11.

“There are a lot of boys pushing for spots which has made the environment more competitive and it’s been good for the club. For myself, I have focused on binding myself to the team, for us to be a successful team we all need to buy in and that is the one key for me. Whatever the team needs, I’ll be there for it.”

“There are a lot of kids pushing for spots, especially the ones coming through the under-20s system, who are pushing our forward pack and also the outside backs. Every position is vulnerable which builds a better culture for the team and the club.”

Leilua believes the selection process for the Raiders is simple – if you are the best player on the field and on the training paddock, you will be playing.

In 2017, the Raiders had one of the best attacks in the competition last year, but their defence copped a lot of criticism for conceding too many tries. In a season in which they missed out on the top eight, they conceded 87 tries, the seventh most in the competition.

Leilua said that the criticism about the Raiders right edge defence was deserved.

As coach Ricky Stuart decides who his starting halves combination will be, Leilua would be happy to put the team first and if required he would put his hand up for the position.

“I’m happy in the centres but if the team needs me, I’m happy to jump into the halves. I don’t shy away from any position. I just get in there and get the work done and get the W, which is all we want this year.”

Huge year for the Raiders. I can feel it! Go Ricky.