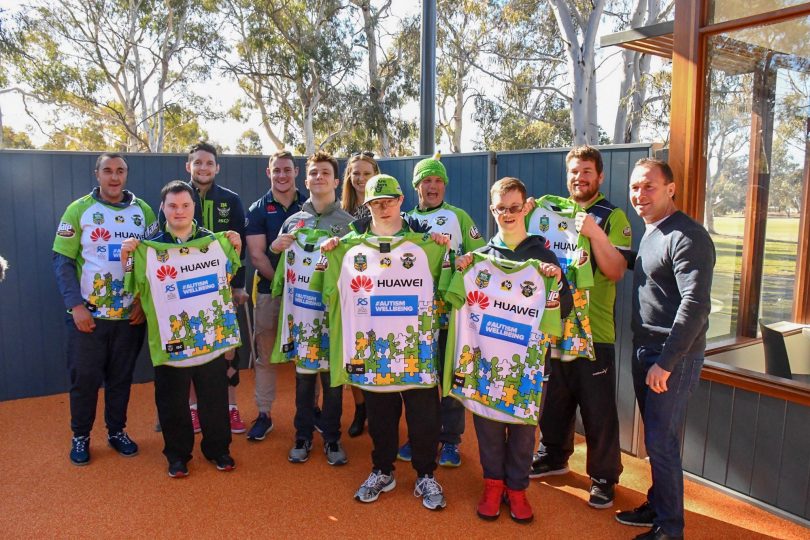 Say hello to the Canberra Raiders Super Squad! Their main duties require them to set up and pack down at Raiders home games throughout the season.

The group is made up of some very colourful personalities. Its members live with different disabilities ranging from autism, Down Syndrome and cerebral palsy, but not once has that slowed them down or dampened their enthusiasm for the Green Machine.

The Super Squad first came together last year with a total of eight members. This year, that number has increased to 13 and continues to grow.

Activities first begin by the group splitting off into two. One group goes to GIO Stadium a couple of days before a home game begins, setting up player signage and seats in the players’ tunnel. They also run out banners and organise the members’ lounge.

The other group are tasked to arrive 48 hours after the game to pack up the set up tasks listed above.

Raiders Game Day manager, Tayla Shields, says the program has provided many benefits to its members, including the opportunity to expand their social circles and meet new people.

“With the set up we are providing an experience where they get to meet other people and interact with other sporting organisations.

“They get opportunities to meet the team, which they love as well. They have really grown.”

WATCH ? The Huawei Super Squad assembled at the Emma Ruby house in Cook the other day where they received a surprise gift from Raiders Coach Ricky Stuart ahead of #NRLRaidersRoosters this weekend.#HuaweiHelpingAus #WeAreRaiders #AutismWellbeing

The message of inclusion is a big part of why the Super Squad continues to grow and Tayla said that one member in particular, Sam Agyemang, got the ball rolling to start the squad.

“At the Canberra Raiders we like to include everyone,” she said.

“I think that’s how the program came about in a way because one of our board members Sam was actually helping by washing the team towels and team jerseys as part of his donkey wash business.

“We started with Sam already in the organisation and basically from there it was about how we can help out all people and then we had a number of different keen people wanting to help out.”

Ms Shields said the success of the Super Squad should be looked at by other sporting outfits as a blueprint to incorporate a similar program.

“I think a lot of great sport organisations should try and introduce something like this,” she said.

“Over the past two years seeing how the squad members have grown, seeing their communication skills and their confidence has been something to be really proud of and we will be continuing the program for future seasons.”

The Super Squad are big fans of the Raiders, naturally, but Ms Shields says that the first-grade side is equally enthusiastic to get to know their extremely helpful, jovial friends.

“The Squad absolutely loves them,” she said. “There are a couple of opportunities throughout the year and the players certainly do take the time to get to know every single member of the Super Squad and listen to their stories.

“They really appreciate the time that they spend out of their day to help with the organisation and the players love getting to know the Super Squad members and the other way around.”

The Raiders have one team filled with males of all ages who live with disability, which will eventually compete against local under 14’s teams in the region.

There is hope that the program will continue to evolve and have more girls join the Super Squad and eventually have their own team.

Our David would love to join. However he is fortunate enough to be employed 9.00 - 12.00 weekdays so probably wouldn't be available at the times he'd be needed. But well done, Raiders for including these willing workers. They must love it!