Canberra Raiders thrash the Eels as the home streak rolls on

Foxsports has the happy news of lime green triumph at the Stadium in Bruce:

NOT since 1995, when their current coach was wreaking havoc in a lime green jersey, have Parramatta lost eight straight games.

So it was somewhat cruel that Ricky Stuart had to suffer the indignity of being in charge of the first Eels side to equal the unwanted feat at his old stomping ground last night.

While they battled gamely in defence, Parramatta couldn’t find the potency to overcome a Raiders outfit who hadn’t kept a team scoreless since 2009.

In dreadful conditions that featured hail and sleet, both sides duked out a try-less second half after Canberra led 12-0 at the break. 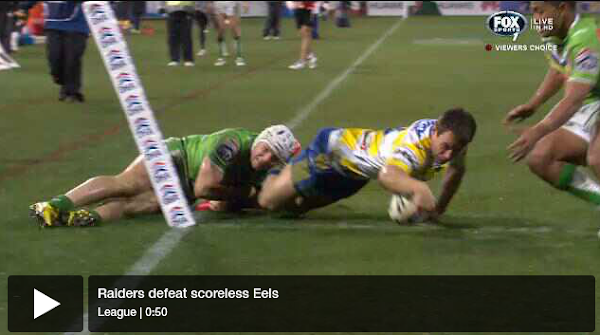 Although I did learn a lesson last night when I went to the game. Ticketek is $10 cheaper than at the gate! We figured that the crowd was going to be low so no need to buy tickets early. Got to the gate and noticed they were $10 each more. Great, wish that was actually on the Raiders website. Anyway we bought a Grandstand ticket for $44, only to then have the grandstands open for all ticket holders. Nice thing to do for the fans who turned up and paid less, but we paid more for the cover.
Asking for a partial refund went no where, despite being a non-ticketed member. Couldn’t even get free of half price tickets for another game. I suspect the person wasn’t authorised to do anything.

Really the Raiders wonder why the crowds are down? Todays Brumbies game isn’t close to being sold out either.

Memberships are great but not everyone has time to go to every single game. I also tend to go see games with friends who support the opposition team, so sometimes its 2 3,4 or more people going. I paid for a ticketless membership to support my team and then don’t feel like my membership is appreciated. I’d have thought being able to get discounted tickets for example for members who want to see a few games a year would be a good plan.

Anyway at least the Raiders won!

Gareth Peck - 20 minutes ago
Nathan Lofthouse what? so you're saying everything on social media isn't well researched, unbiased fact??? WTF??? View
Gabriel Spacca - 8 hours ago
Pretty sure he is not the target demographic for TikTok. View
Larry Appley - 8 hours ago
A publicity stunt from a former radio announcer? Who would have thunk? View
Property 26

Lori J Tas - 8 hours ago
Sue Ellen since more people live there now, that really disproves your opinion that it's oldness was the appeal 🤨 the new... View
show more show less
*Results are based on activity within last 7 days