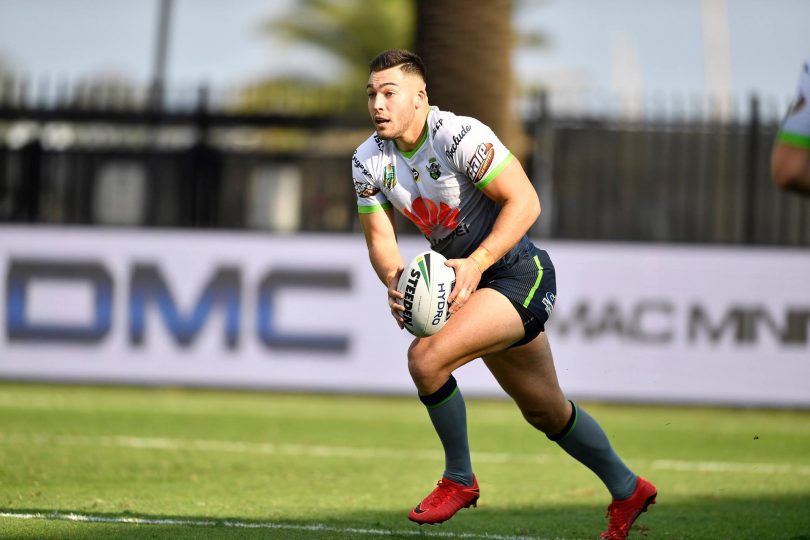 Nick Cotric said he isn’t distracted by the speculation of playing State of Origin. Photo: Supplied by Canberra Raiders.

Canberra Raiders winger Nick Cotric said an Origin debut would make his dream come true but insists he isn’t distracted by a potential call-up to the NSW squad.

Blues coach Brad Fittler said the Green Machine winger was a bolter for the NSW squad last year and his impressive start to the 2018 season has only added fuel to the speculation.

Since his debut last year, the 19-year-old has been in exceptional form with 19 tries in 33 games for the Canberra Raiders.

“I don’t really focus on [talk about Origin]. I just focus on the Raiders and how I perform every weekend for the club and that’s the main thing,” he said.

“I’d definitely take [the chance] with both hands because it’s a good opportunity, but I’m just focused on this weekend’s game.”

The winger said he had not been approached by Fittler but backed himself to fulfill his dream of playing Origin if given the opportunity.

“It will definitely be a huge step up but I’ll take that opportunity with two hands,” Cotric said.

“Since I was little kid it was always a dream of mine to pull that Blues jersey on.

“I remember watching Origin as a kid, with the family or with friends, so it would definitely be a dream of mine.”

The Green Machine enters their clash against the Sharks on Sunday afternoon (13 May) full of momentum, having lost just one of their last five games.

Despite the Raiders beating the Sharks 30-12 when they met last season, the Canberra local said the Raiders were ready for a tough game on Mother’s Day.

“It is going to be a tough one at GIO Stadium. I remember last year, they ended up flogging us at GIO so all the boys are keen and ready to play this weekend and hopefully we get the win,” Cotric said.

Canberra Raiders vs Cronulla Sharks at GIO Stadium, Sunday 4:10 pm. But your tickets from Ticketek.

Ian McLeod - 23 seconds ago
Charles Godworth yes I do and I also upgraded to three phase and will install a Zappi charger, but most won't need it. The po... View
Ian McLeod - 14 minutes ago
Jane Smith then you hold on to the past to make a point then. Meanwhile the world has moved on. View
Ian McLeod - 16 minutes ago
Ben Garden which is what I'm doing and around town 2KW home charging is fine View
News 27

Robert Taylor - 4 minutes ago
I suppose it was unsafe and could not be kept for pedestrians & bikes. Sad View
Stephen Murray - 3 hours ago
I remember the punt that the bridge replaced. View
Christopher Cuba Rabanal - 4 hours ago
I’ve heard the best fish and chips in the bay is closing due to the lockdowns. That’s pretty sad 😢 View
News 27