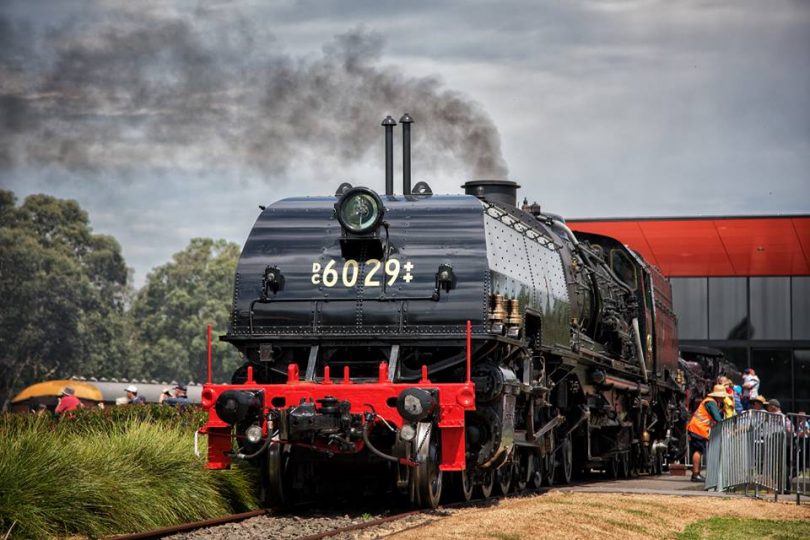 The Garratt-Beyer 6029 steam locomotive is coming back to Canberra on the first weekend of September. Photos: Supplied.

A reborn Canberra Railway Museum will celebrate its official return to the Kingston yards with a visit to the national capital by its former prized possession, the Garratt-Beyer 6029 steam locomotive, which passed into private hands during the sale of many of the troubled organisation’s assets.

On 1 September, the liquidator of the former Australian Railway Historical Society ACT will hand over the site to the new body and registered charity that will run the Museum and operate heritage trains, Capital Region Heritage Rail.

The former heritage rail organisation was forced into liquidation last year after the failure of an ill-fated freight venture that was designed to finance its activities.

Capital Region Heritage Rail chairman John Cheeseman said the NSW Rail Museum at Thirlmere, where the Garratt is now housed, would bring a train pulled by 6029, the largest operating steam locomotive in the Southern Hemisphere, to the ACT on the weekend of 1-2 September.

It will treat steam rail buffs to runs between Canberra and Queanbeyan, and Canberra and Bungendore over the weekend.

“They’re doing it in conjunction with us and they will use our facilities to service the train, and we’ll get a share of the takings,” said Mr Cheeseman, who expects more cooperation between the two museums in the future. 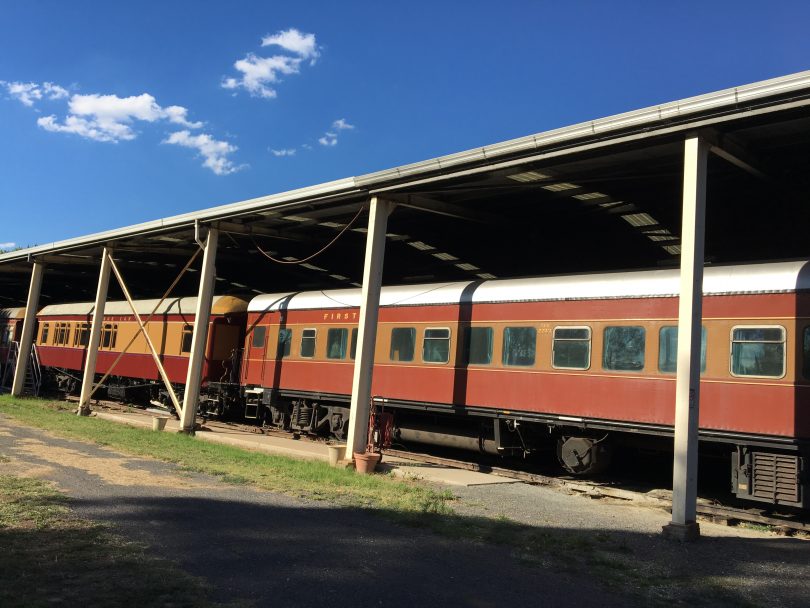 The new heritage rail organisation plans to not make the same mistake of its predecessor, taking the liquidator’s advice to establish a separate holding company, ACT Heritage Rail Holdings, that will own what heritage rail assets remain.

“The advice we got is that it is the best way to do it because if the museum fails, the heritage assets are in a separate company and they’re not at risk,” Mr Cheeseman said.

He said Capital Region Heritage Rail would still trade as Canberra Railway Museum, but it won’t be until early next year that the Museum would officially open its doors and operate any of its reduced rail fleet.

In the meantime, the 70 volunteers have plenty of work to do to prepare the site and make it safe.

“At this stage, we get back to the site in early September but, given the fact that the site has been closed for 18 months, we’ve got a bit of work to do to make it safe before we allow the public to come in,” Mr Cheeseman said.

He said graffiti artists had cut 30 holes in fences, the grounds needed tidying up and safety barriers re-erected, as well as installing CCTV cameras and other security measures.

The Museum lost two-thirds of its fleet but will still have a working steam locomotive, display steam loco, a couple of rail motors and 20 carriages, including 12 steel operational ones. The other carriages date from the 1890s and 1900s and are too old to be used but will be on display.

The Museum is also in negotiation with the NSW Rail Museum to acquire another steam loco as a display.

Mr Cheeseman said the rail motors would probably be the first to take passengers for a run when the Museum opens its doors. 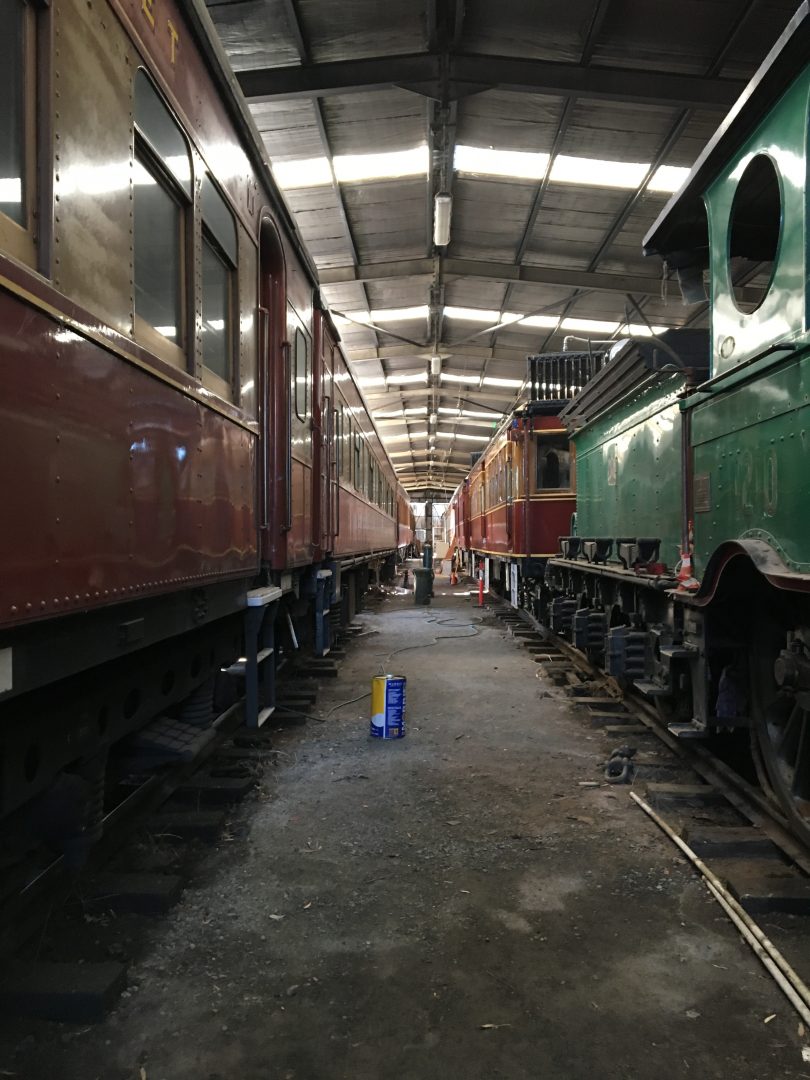 He said funding so far had come from the volunteers but with more space now available at Kingston, freight operators looking for sidings to park their wagons in down times would provide a reliable income, with an agreement already struck with one company.

A retired bank manager, Mr Cheeseman said he would be keeping a close eye on the finances and the new organisation would take on board a feasibility study by the liquidator that focused on covering operating costs.

“We’re not going to be the big multi-million organisation it was but we’re certainly not going to running up debts either,” he said.

“We’ve got a proper company board in place so that we’ve got the governance right.”

But it’s people power the new organisation needs, with at least 150 volunteers needed to keep it on track.

“This will only work if we get the support of the community particularly in terms of people on the ground,” he said.

While the ACT Government supports the Museum staying at Kingston for the time being and has offered promotional and marketing support, it doesn’t expect any cash coming its way.

Mr Cheeseman expects the liquidator to finalise his work as soon as a few court matters are dealt with, and some sold-off vehicles still at Kingston will have to be removed by the end of the month.

“That’s all in the past, we want to get the Museum up and running and as a Railway Museum, which is what it was built for, and start doing it albeit with a smaller fleet,” he said.

Bookings and further information from www.nswrailmuseum.info/events
Updates will be posted on the re-start Facebook page.

This is fantastic news.

Cary Elliot Johnson - 2 hours ago
Get out. And i was feeling positive about asking Mr Gentleman about getting a Batcave Interchange developed in Lanyon. Booooo... View
Gloria Altinger - 3 hours ago
Could have bought all Canberrans an a electric car for what they spent on the tram...... View
Ric Hingee - 3 hours ago
So why wasn't the tram also canned? View
ACT Election 11

Jason Preston - 3 hours ago
Buying your vote with your kids View
Jesse Mahoney - 6 hours ago
Y'all are arguing with someone who likes Pauline Hanson. I wouldn't waste your energy View
John Hartley - 7 hours ago
Labour drunk on money till there is none left then tax go up there a joke and have and will be for a long time View
Lifestyle 8

Charny Barney - 14 hours ago
Yes - lets build more trams - first to Woden, then everywhere else in Canberra. It's brilliant. We have roads everywhere, so... View
Charny Barney - 15 hours ago
Magical thinking! Brilliant and perfect description of lib policies 🤡 View
Geoff Roberts - 17 hours ago
They can afford to offer the world because they know they have no chance of forming government. View
News 13