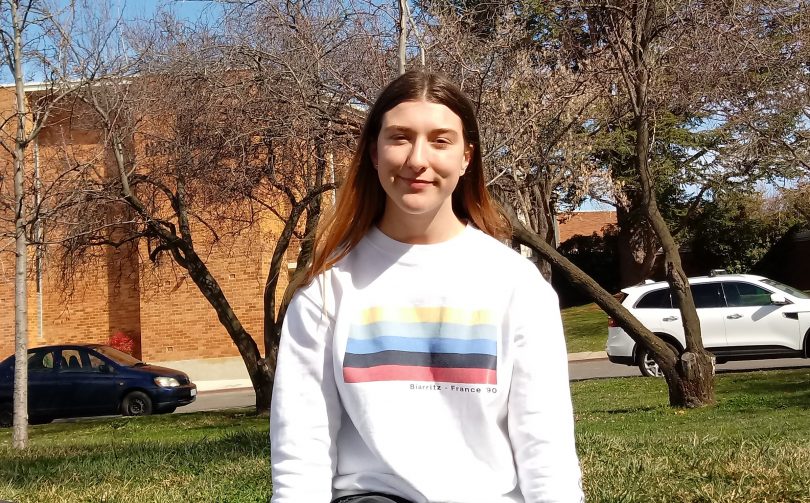 Rebecca Hughes has been awarded a Commendation For Brave Conduct in the Australian Bravery Awards. Photo: Ian Bushnell.

A Canberra teenager who jumped into the boiling ocean to save a friend swept off rocks says she would do it again despite being scared to death at the time.

Narrabundah College student Rebecca Hughes, who was 14 at the time, has won a bravery award for her actions on the afternoon of 17 January 2016 at Merry Beach on the South Coast.

Rebecca, now 16, said she can’t recall too much about the incident except the adrenalin rush, but did remember thinking that if it was her in the water she would want someone to save her.

Would she make the same decision to help someone again?

“Yes I would because I hope if I was in that situation someone would come to my rescue,” she said.

Rebecca and her friend’s family had been camping beside the beach, and on the day in question, it was very hot. So, late in the day after a swim, they and another friend had decided to sit on the rocks to catch the sea breeze and splashback from the waves.

But Rebecca and her friend were struck by a large wave and knocked down on to a lower rock platform before her friend was sucked in to the heavy surf.

Her friend had hit her head on the rocks on the way down and was unconscious in the water.

“She was bobbing face down and limp,” said Rebecca, who jumped the few feet into the water to go to her aid.

“I tried to put her on my shoulder and every wave that came up I tried to thrust her up on to the rocks so she could get up. Each time I got her up on the rocks, the waves kept pulling her back in,” she said.

Rebecca said with every attempt, the oyster-covered rocks cut them, but eventually, she was able to push her up on to the rocks and herself climb out of the water to safety.

Their other friend higher up on the rocks ran back to camp to raise the alarm while Rebecca rolled her friend into the recovery position and stayed with her until help arrived.

Her injured friend’s mother rushed the pair to Milton Hospital, where they were washed down, had oyster shell extracted and cuts stitched and treated.

A strong swimmer who had grown up along the coast, Rebecca acknowledges the traumatic impact of the event, saying she is now more aware of her surroundings and the potential dangers there might be, including the surf.

The Commendation for Brave Conduct was almost unbelievable, said Rebecca, who was nominated by her previous school, Nowra Anglican College.

“I feel really honoured and grateful,” she said.

Rebecca has her sights set on a career in the Royal Australian Air Force as a crew attendant.

“I just like helping people and I believe if I needed to I would be able to help someone. I like that kind of work,” she said.

Two Canberra men have also been commended for bravery, after rescuing a man trapped in a burning car in Kambah in 2013.

In the afternoon of 2 January 2013, Grant Woodbridge was driving along Sulwood Drive in Kambah when a stolen Ford sped through a give way sign and crashed into a Holden Commodore. The driver of the stolen Ford then fled the scene.

Mr Woodbridge stopped his car and quickly headed towards the site of the collision as other vehicles also stopped. Grass had caught fire around the Holden Commodore and he could
see that the driver had leg injuries and was trapped.

Despite the threat of the grass fire he reached in and unlocked the door. He undid the man’s seatbelt and tried various methods to free him but was unable to get him out of the vehicle.

Another passerby supplied Mr Woodbridge with a fire extinguisher and he emptied the canister into the engine bay but the flames persisted.

With the danger still present, he then went to his car and retrieved two doonas with which he attempted to smother the flames.

At this time, Dr David Brown arrived on the scene and stayed with the trapped driver and supported his neck. The fire brigade arrived and extinguished the flames and removed the injured driver from the car.

The Commendations for Brave Conduct – along with the Star of Courage, Bravery Medals and Group Bravery Citations – will be presented at an Australian Bravery Awards ceremony at Government House in September.

David Keir - 31 minutes ago
Don’t worry about the homeless men View
Lilly Walter - 58 minutes ago
Wayne Williams, bloody oath they do. More manipulative and cunning women are. If I had the fund or patience to create a men o... View
Wayne Williams - 2 hours ago
Lilly Walter tell that to the recently fatherless young fella in Brisbane, women commit family violence also View
News 10

brianf - 56 minutes ago
The stats I've seen suggest about 90% of accidents between cars and 'vulnerable road users' (cyclists and pedestrians) are th... View
paservank - 2 hours ago
...or get rid of all the cars? (an equally stupid and self-centred idea) View
Community 24