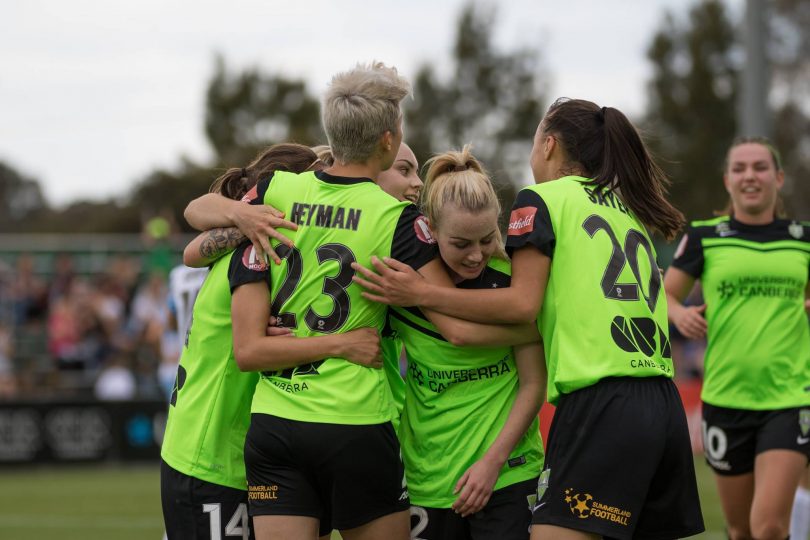 Canberra United is set to play a match in Queanbeyan this season as the release of the draw for season 11 of the W-league on Thursday afternoon (6 September) brought many surprises.

United will move one of their six home matches from their usual ground at McKellar park to Seiffert Oval in Queanbeyan when they face Melbourne Victory in round 12 and for the first time ever, United fans will be able to watch all their side’s matches live.

Football Federation Australia (FFA) announced all 57 matches of the new W-League Season will be broadcast or streamed live on Fox Sports, SBS Viceland and the My Football Live app, which is 27 more matches than last season.

The 2018/19 season will also see the introduction of Thursday night football with Canberra set to play two Thursday night fixtures at McKellar Park in prime-time, broadcasted live on Fox Sports and live streamed on the My Football Live app.

The Thursday night fixtures are a first for the W-League and United head coach Heather Garriock praised FFA for their role in getting them off the ground.

“To now have Thursday night fixtures is exceptional and shows how far women’s football has come,” Garriock said.

“I’d like to say well done to FFA for setting these fixtures up and putting the W-League front and centre in a prime slot. For us to be able to promote women’s football as the priority is great.”

Garriock also said the move to play in Queanbeyan was an important step to embrace the entire football community and to show the surrounding region that a pathway is available.

“It’s really exciting for us to be taking a game to Seiffert Oval,” Garriock said. “Canberra United has a role to play for young women not just in Canberra but in the surrounding region, and this helps us to realise that.

“McKellar Park will always be our home, but it is important that we embrace all of the community here and we’re excited to play in front of both our loyal fans and fans from the Queanbeyan region.”

Belinda Cappello - 4 minutes ago
Warwick Alsop I didn't say covid wasn't the cause just putting it out there what his family are saying v msm View
Mark Maddock - 56 minutes ago
"He did complain of feeling a little fatigued but the deterioration happened suddenly is my understanding," Dr Chant said. Mr... View
News 23

whatwik - 14 minutes ago
Roadwork protocols (and enforcement of the responsibilities of contractors) require urgent attention throughout the country.... View
whatwik - 21 minutes ago
And the windscreen washers (who the authorities obviously don't have a problem with) walking through moving traffic, extortin... View
tonyoakden - 1 hour ago
I cycle everywhere, I do maybe 50K a week in my car, expect on the Sunday morning I got pinged doing 55 going through Civic.... View
Opinion 3

Ailsa Turrell - 1 hour ago
I agree - we have higher rates of vaccination here despite it being so difficult to get initially and I have not met anyone w... View
Ed N Joanne Towner - 2 hours ago
Juz Hawke Agreed. We are also fortunate to have a bit of distance from Sydney to make Covid control a bit easier. View
Juz Hawke - 3 hours ago
Definitely agree that Canberrans are mostly very compliant with the Covid rules, and very grateful we are largely unscathed.... View
Food & Wine 7

Milestone Entertainment - 10 hours ago
Is it really that hard to see beyond self and consider the greater good? At this point we all know the rules...at infinituim.... View
show more show less
*Results are based on activity within last 7 days

Sleeping rough on Canberra's streets as the city shivers through sub-zero temperatures is bad enough, but those on the ground...
News 23

@The_RiotACT @The_RiotACT
Deane Richard Roach, who gained infamy for defecating in a pool last year, will remain behind bars until at least next year after he was sentenced yesterday https://t.co/UK05OS0snQ (29 minutes ago)

@The_RiotACT @The_RiotACT
Have you hit a #pothole? You have plenty of friends as the wet weather wreaks havoc on the capital's roads https://t.co/SdXv0PSAil (41 minutes ago)