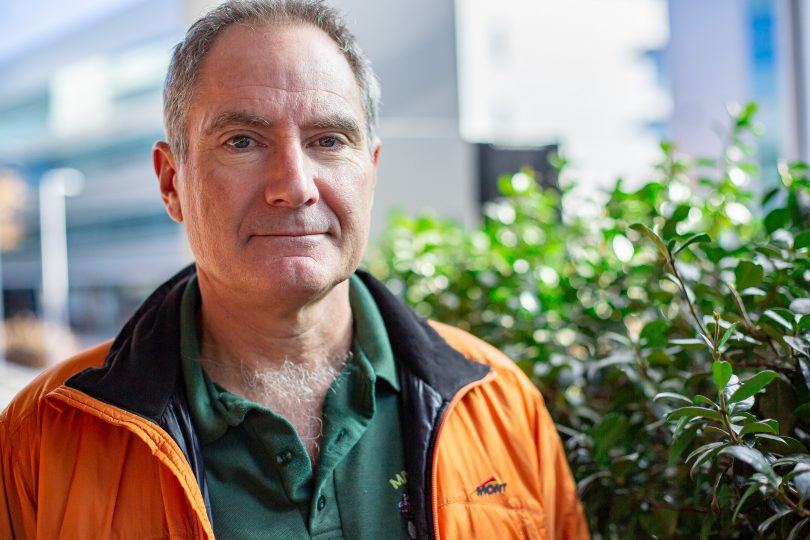 Canberra-based climber Andrew Lock is one of Australia’s most experienced mountaineers and the only Australian to have ever summited all 14 of the world’s 8000m plus peaks. But he was profoundly shocked by what he saw at Everest Base Camp on his most recent trip to the Himalayas.

“Base Camp was more than a kilometre long. It was a tent city with well over a thousand people, and that to me was indicative of the potential for a massive disaster,” he says.

Lock’s comments come after Canberra public servant Gilian Lee was found close to death on the summit. Social media posts indicate that Mr Lee, who was not known to Canberra’s professional mountaineering community, had attempted to climb the mountain from the Chinese side without oxygen. At the same time, photos of a reported traffic jam on Everest’s peak emerged.

Andrew Lock says that the overcrowding on Everest is lethally dangerous for multiple reasons. “The ease of access to the mountain means that it’s full of relatively inexperienced teams looking for money but not providing the leadership and guidance on the mountain that’s required,” he says.

When he first climbed Everest, Andrew and his team scouted their own route across the icefall and placed their own ropes. They didn’t use oxygen, thereby reducing the need for sherpas to carry up equipment.

“Now a commercial client will almost always use oxygen and so they should because the climbers now have less and less experience and physical preparation, so they need more and more oxygen. That requires massive logistical support to get the paying clients up there.

“The clients don’t want to carry their own gear, the food, the stoves, the tents, the oxygen, so that requires huge human support. Then they need the leadership for decision making and risk management. Then you need assistant leaders and guides to escort sometimes very inexperienced clients.”

All this can add up to $100,000 or more per person, and Lock says that there are plenty of wealthy people willing to pay the price. Frustratingly for experienced climbers, large operators will often close the route while they put in climbing ropes and there have been fisticuffs over who has the right to access the mountain.

But while these massive logistical operations overcrowd and stress the route, there are far more dangers for the people Lock calls “the slipstreamers”. These are climbers who use budget local firms or even a single sherpa to climb the mountain in the literal footsteps of larger and better-organised groups.

“There are now so many people up there that some better operators will put out false radio messages to deceive those who are following without paying,” Lock says. “Then it becomes even more dangerous because the slipstreamers start the climb and there is nobody there if something goes wrong. They have no ability to make informed decisions and they die.”

While regulations require an accompanying sherpa for climbers, Lock says that’s not regulated in any way for experience or qualifications. The downloadable Himalayan database has records of expeditions from 1905 to 2018 including deaths: Lock says that one locally run company has recorded 50 deaths in the past six years without any repercussions from local authorities.

He believes that endemic corruption in the Nepali government means the industry must self regulate, as Antarctic tour companies already do. “Ideally, responsible ministries in host countries should limit the climbers and expeditions and differentiate between commercial and non-commercial clients. But the only regulations from Nepal are focused on how they can further milk the foreigners,” he says.

Meanwhile, the boom in commercial climbing means that K2 and Annapurna, both even more dangerous than Everest, are now also being offered as guided climbs. “Why they’d guide on Annapurna is beyond me, it’s so fraught with danger. There are no safe lines and massive ice cliffs frequently break away under their own weight.

“People think they’ll be well managed on these peaks, but whenever anything goes wrong operators claim the client didn’t listen or do the right thing. In fact, they are taking the role and the money but no responsibility.”

Lock himself is sailing to Antarctica to climb. He will return to Nepal next year to take a group up a 7000m peak and then perhaps Everest again. He says he’ll never stop adventuring. “If I die in my climbing harness, that won’t bother me if I don’t bother other people,” he says.

Should get a chair lift.

Canberra man miraculously saved on the slopes of Everest

100,000 masks arrive in Canberra as ACT Health warns they are not 100 per cent effective