Canberra’s elite sleep on the street for charity 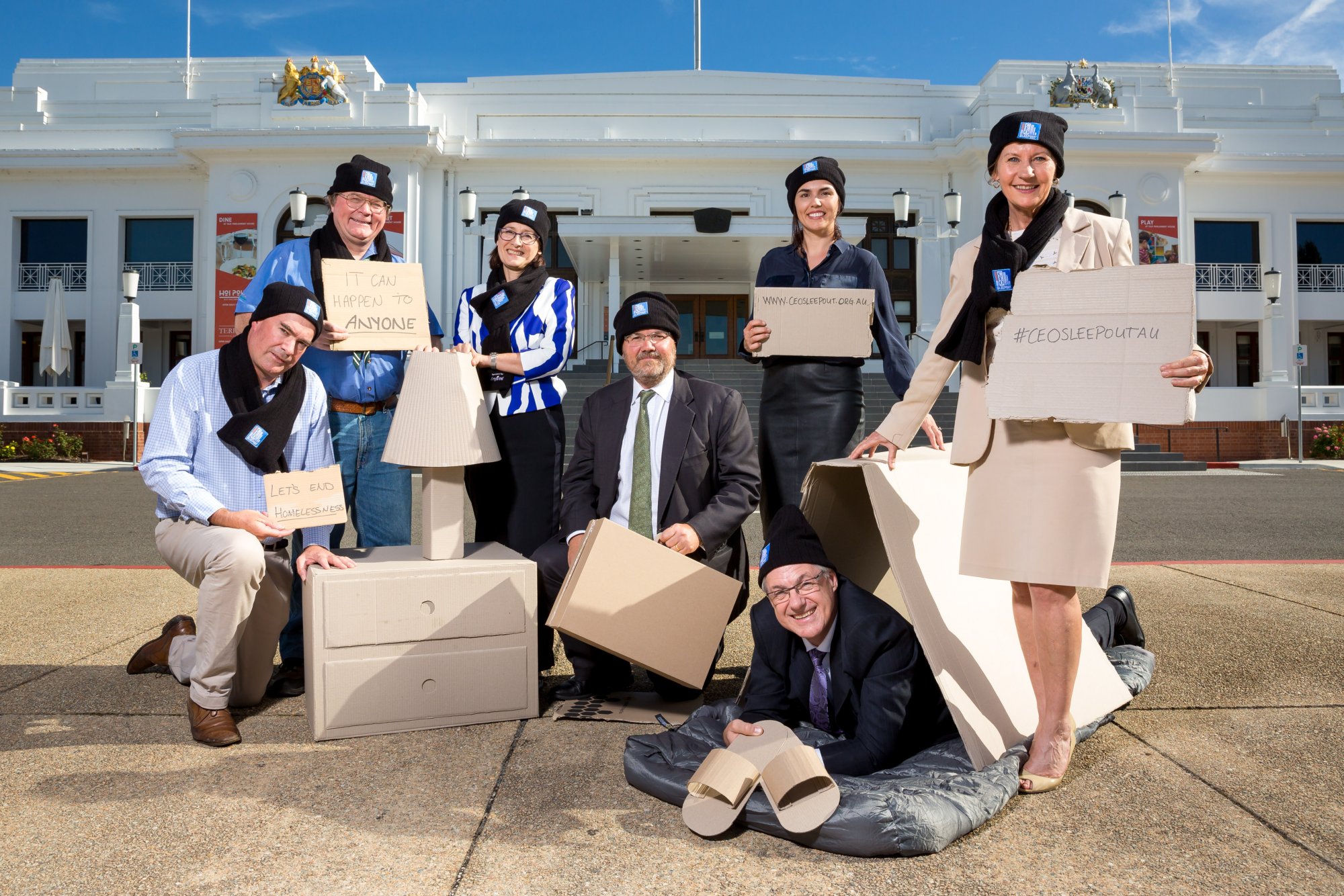 As part of this effort, on 22 June at the Museum of Australian Democracy at Old Parliament House, Canberra’s CEOs will sleep on the street in cardboard boxes for one night.

The Sleepout takes place during winter, when the nights are coldest.

As part of the Sleepout, which aims to replicate how Canberra’s homeless sleep, participants will raise funds for Vinnie’s vans and, it is hoped, raise the profile of homelessness as a political issue.

“It introduces fundraising firepower by putting the impetus for fundraising in the hands of CEOs, which means these people can tap into their networks — which can be significant,” said Tim Kirk, the owner of Clonakilla wines and one of the ACT’s most influential winemakers.

“I’m happy to spend one night out sleeping out in the freezing cold to help do something about it.”

For CEOs in the public sector, feelings were similar.

“Homelessness in Australia is such an important issue – the most recent figures from Homelessness Australia puts the number of homeless Australians at over 100,000, and that figure is from 2011,” said Greg Hood, CEO of the Australian Transport Safety Bureau.”

“It’s especially heartbreaking that around 27% of homeless Australians are under 19 years old.”

“I’m sure the event will be a great success, with many of our community’s most prominent CEOs contributing their time and resources towards breaking the cycle of homelessness. I’m glad to be taking part.”

As well as business leaders and APS executives, some of the territory’s lawmakers thought similarly.

“Canberra is a wonderful place to live – if you’re on a good wage. If you’re not, it can be a mongrel,” said Mark Parton MLA, the Shadow Minister for Housing.

“The housing affordability crisis in Canberra continues to push more people into severe housing stress and many of them end up homeless.”

“This is just one night and it can’t possibly recreate for us the loss of belonging, the lack of security and the despair of a sustained period of homelessness, but it will help us to understand.”

The event, Vinnie’s hopes, will raise half a million dollars, all of which will go into its Canberra arm.

The activities the money will be spent on include night patrol, food service, emergency relief, and its university partnership with ACU.

Geoff Langridge - 27 minutes ago
lets go off science not some woo-woo idea that plants could be more sentient because we apparently "dont understand them". If... View
Henry Rocek - 28 minutes ago
Gawd, after reading all these comments I’m off to KFC! 😂 View
Dean Newman - 42 minutes ago
Geoff Langridge It is all relative. Put some fish in the blender or some oat grass. Same thing, both are living. A stab to a... View
Business 7

Archie Mac - 5 hours ago
My uncle told me in climbed the fence as he couldn’t afford to pay. Said he walked in just in time to see Bradman walking o... View
Louellyn Violet - 17 hours ago
How about the Giants playing in the snow? View
Andy N Bev Esler - 1 day ago
you could clearly hear from the boundary Brian Stratham, the bowler who bowled out the Don for 4 runs, appealing for a No Bal... View
Business 2

Lucian Burca - 14 hours ago
Elizabeth McLennan in the last 6 years while I was flying with Qatar and Emirates it was metal cutlery on board. View
Andrew Dale - 18 hours ago
Probably more actually. It's $10 for 1000 plastic forks. I think it $40 - 50 for wooden forks. Oh well we will all have to in... View
Julia Ross - 19 hours ago
Nick James funny, so's mine. View
Opinion 4

Scouts’ honour raises $100,000 for the homeless and vulnerable

@The_RiotACT @The_RiotACT
Dargues Gold Mine near Braidwood will soon have new owners, as issues with noise + deteriorating roads continue https://t.co/Bx60Ezu4Z2 (13 minutes ago)

@The_RiotACT @The_RiotACT
Defence has confirmed it did not radio the location of the Orroral blaze to the ESA immediately as radio traffic focused on the crew's safety https://t.co/roYKCgXfeZ (2 hours ago)