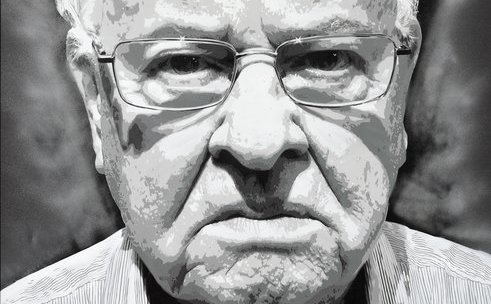 On the Archibald Prize website you will find listed as a finalist on Luke Cornish, better known around Canberra as ELK.

We believe he is the first stencil artist to achieve this honour which is a hell of a thing for a local.

Amongst ELK’s many claims to fame included Liberal MLA Steve Pratt attacking his commissioned artwork and ending up on The Chaser:

Local Canberra artists Gary Smith and Frank Thirion also made the finals with their entry ‘The faceless men’.

After seeing the rest of the field – this one should be a shoo-in notwithstanding its flaw! Not the best year for the Archies overall.

…someone who has been hung in the finals.

Ooh, that sounds a bit saucy!

Who doesnt know who father bob is?

Mrs Chop – She’d have no idea

Is this an original portrait or a stencil lifted off a photograph? I imagine the arty types in Sydney will have a field day if this entry wins.

I think you’ll find that the majority of Archibald’s are of people that don’t have the time to sit properly and who have their painting ‘lifted’ off a photograph… source: someone who has been hung in the finals.

Who doesnt know who father bob is?

Given the tropfest movie on their work together i’d guess it was from life.

Yeah he said it was from life.

Technically amazing – but sorry I don’t think it works as a portrait of Father Bob for a general audience, as it’s completely lacking in context. You would have to know exactly who he is to interpret this face – if you didn’t know who this amazing man is, you’d think it was a picture of just an angry man. Not sure whether the Archies assume a general audience or whether a portrait just intended for people who know the subject well would rate in the comp.
Love the detail! The ear hair!

Great work – hope it gets the prize! (ELK, not Pratt)

Is this an original portrait or a stencil lifted off a photograph? I imagine the arty types in Sydney will have a field day if this entry wins.

Given the tropfest movie on their work together i’d guess it was from life.

Awesome. his stuff is so good, it’s doubly-galling to think of how much they spend on those asinine public artworks, and we get his amazingly good stuff for free.

There’s a piece on him making the finals on news.com.au today as well – http://www.news.com.au/national/luke-cornish-hoping-to-make-the-archibald-prize-finals-with-portrait-of-father-bob-maguire/story-e6frfkvr-1226300189069

There’s a photo of him standing in front of the entry, and from a distance it looks even more impressive. Good luck ELK! I always love walking down Petrie Plaza and seeing his work – it’d be great to be able to walk down there every day, and admire the work of an Archibald winner!

And well deserved too. His work is amazing and this piece is no exception – look at the detail, even down to the glint of light on the glasses! I hope he wins. It’s only a pity he’s not really our Luke anymore, having moved last year to Melbourne where I understand he is quickly gaining notority. Good on him.

Stephen Esdaile - 36 minutes ago
And how hard is it to cross the border to get a new set of shoes on the car? At least the fuel tax works because there's no p... View
Julie Macklin - 1 hour ago
Km per year should differentiate between (congested) city with alternative ways to travel, and (not congested) country, often... View
Warwick Alsop - 6 hours ago
Jess Harris They already do that with petrol vehicles as well. Ultimately the best thing about fuel excise is that is measure... View
News 1

bikhet - 3 hours ago
Road usage charges have been discussed among economists for several years now as a form of taxation to replace fuel excise. O... View
Breaking 1

MERC600 - 3 hours ago
Our 4th returning diplomat found to have the bug. Risky people.... View
Opinion 14

Ray Whiteman - 3 hours ago
Hahaha! You think EVs are going to get a free ride? Wait until they are more popular, then the costs will hit owners View
dolphin - 4 hours ago
the trouble with introducing road user charging for EVs is that within a few years everyone will be driving one. so although... View
dolphin - 5 hours ago
your usual nonsense retro. cyclists pay taxes too (in fact the vast majority are car owners as well). would you like to impos... View
News 58

JC - 4 hours ago
Not that I care who the liberal senate candidate is I can see why many are so annoyed. The way in which old Zed was originall... View
News 5

Martin Budden - 4 hours ago
The government has been very clear: CRS are welcome to do it in Hume, but not in Fyshwick. CRS just needs to switch to Hume. View
News 16

Glen Sturesteps - 4 hours ago
Further proof of me being right, not that we needed it 😬 View
Hayley Marie - 4 hours ago
Kooms Sam I have a keen interest in native flora. I even drink a gin called “the botanist”, which is telling... View
Anna Louise - 5 hours ago
Glen Sturesteps looks like you were right 🤷‍♀️ View
Lifestyle 23

yoyoyo - 4 hours ago
They do bulk orders i.e. 100 apartments at a time. Good luck getting a price out of them. View
Property 3

Ash Claire - 5 hours ago
Yes, and I want to know where they get their stats from View
Martin Budden - 5 hours ago
Ash Claire it says at the start of the article: "Tenant lobby group Better Renting calculates....."... View
Ash Claire - 6 hours ago
Where are the stats coming from? View
Opinion 14

bj_ACT - 7 hours ago
Lucky for us kids never listen to their teachers. ?... View
News 4

Kali - 9 hours ago
Awesome!...now all we need is for the bridge to be connected to a direct highway link to Canberra that avoids the Clyde. Canb... View
Motoring 33

Michael Grinceri - 9 hours ago
The reasons for a particular speed limit in a particular place is based on a standard manual. The manuals are highly bureaucr... View
show more show less
*Results are based on activity within last 7 days

Negotiations over pay and conditions which could avert strike action are continuing between garbage collection company Suez and the drivers'...
Opinion 14

A 16-year-old charged with murdering an 18-year-old at a Weston skate park in the early hours of 27 September has...
*Results are based on activity within last 7 days

@The_RiotACT @The_RiotACT
Looking for an exercise buddy? Meet Cookie, an active pooch who is at @rspcaact hoping to find a new owner https://t.co/0AeZxL5DVO (11 minutes ago)

@The_RiotACT @The_RiotACT
Chief Minister Andrew Barr says all states and territories will move to some form of road user charge over the next decade https://t.co/TPsTqVIk0X (2 hours ago)