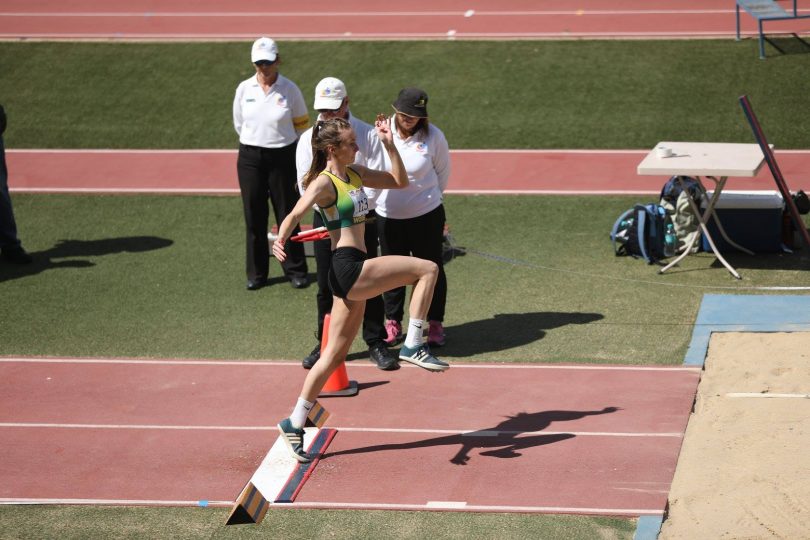 Four ACT athletes have been selected to represent Australia at the IAAF World under 20 Championships with Athletics Australia announcing their 57 future stars of Australian track and field to compete in Finland.

Long jumper Grace Brennan was selected to compete at the World u20 Championships in July this year though she hasn’t jumped competitively since February.

The 2018 Australian Athletics Championships on the Gold Coast in February proved to be a bittersweet moment for the Canberran, where she made the jump that qualified her for the World Championship, but tore her left hamstring taking off on another jump at the same event, thereby missing her chance to compete at Nationals in March.

“I tore my hamstring competing in the Gold Coast so I had about a month to be fit for Nationals but unfortunately re-did my hamstring a couple of days beforehand,” she said.

“I went back too early I think. So it was a relief to be selected for Australia because I didn’t compete at Nationals.”

The 18-year-old is now in a race against time to get back to full fitness before the team leaves for Finland in late June.

“The hamstring is getting better and I am building up to full strength training,” she said.

“I am going to a lot of physio appointments and a lot of strength work to build it back up and light jogging to try and get my rhythm back.”

The young Canberran and her coach Paul Alchin decided that Brennan would have to jump a personal best of 6.20 at the Gold Coast event if she wanted to make the Australian team for the World under 20 Championships.

Brennan spread post-it notes with the elusive number written on them all over her room to drive and encourage her to pursue her dream. All that hard work was worth it when she finally did make the jump and was named in the Australian team.

Brennan believes her left hamstring will hold up and she is capable of jumping 6.20 for the second time in her short career.

“It is probably my first big competition and I didn’t really even think about competing over there, I was just focused on getting there,” she said.

“I would love to make the final but I honestly don’t have any idea and I am just grateful to be going.”

Brennan will be joined on the plane by ACT athletes Tom Agnew (4 x 100m relay), Joshua Torley (10,000m) and Annamaria Leszcynska (400m hurdles) to compete against the best young athletes from around the world.

Robyn Hodgkin - 36 minutes ago
Oh Michael, Michael, Michael. I am not even going to address that argument. Just to say the trams wouldn't be wireless in tha... View
Ashley Wright - 49 minutes ago
Mark Flynn George Street in Sydney uses a very expensive Alstom propriety system. View
Ben Van de Bron - 1 hour ago
Matt Gregory that should not exempt them from contributing to an infrastructure project. View
News 1

Grail - 59 minutes ago
Is there anything preventing the ACT establishing their own police force? View
News 4

Natalie Grey - 6 hours ago
Jill Lyall "what's wrong with socialism?" Try asking the citizens of Venezuela! View
Jill Lyall - 9 hours ago
Henry Kivimaki what’s wrong with socialism? It’s a better use of our taxes than building war machines and subsidising min... View
Marie Ryan - 15 hours ago
Bob Cheney Why would we want to get rid of the current govt when they've achieved a city that runs on renewable power and has... View
News 27

One of Canberra’s greatest athletes retires from competitive sport

@The_RiotACT @The_RiotACT
This year’s National Multicultural Festival again drew large crowds, with about 200,000 people munching, dancing and weaving their way among 350+ stalls and 150 performances from six continents https://t.co/ayGVRJiOGE (29 minutes ago)