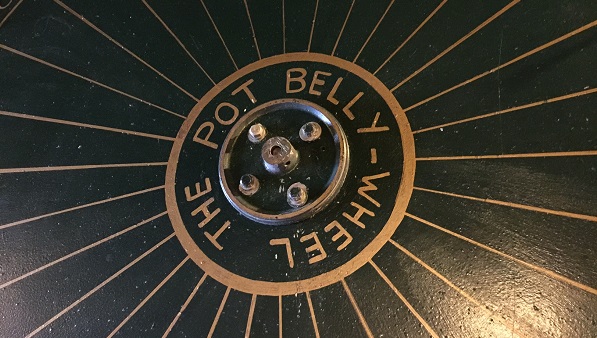 Since it was purchased and revived by three young couples in 2015, Belconnen’s iconic Pot Belly Boutique Bar has developed a strong reputation amongst Canberra craft beer connoisseurs. Last week that reputation evolved into full-blown excitement amongst Canberra beer lovers as news quickly spread that the Pot Belly had received its license to manufacture alcohol.

Another brewery on the local scene would be a boon for Canberra tourism and add to existing drawcards for beer lovers like Bentspoke, Wig and Pen and Zierholz, as well as numerous craft beer-serving pubs now dotted all around our city. Along with internationally renown wineries, cafes and restaurants, Canberra’s increasing sophistication as a food and wine/beer/spirit destination is encouraging young entrepreneurs to push their businesses even further than would have been possible only a few years ago. 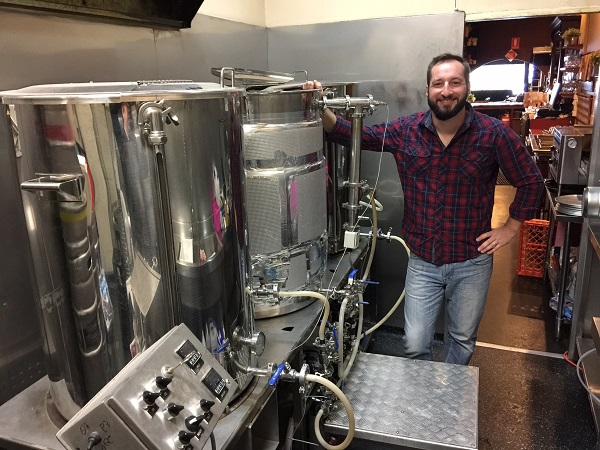 Part-owner Joel Baines explained to RiotACT that the Pot Belly would be celebrating 40 years in Belconnen this July and they’re hoping they will have a few locally-brewed ales to help with celebrations. The photo above shows Joel and the new 230 litre tanks in what was until recently Pot Belly’s fully equiped kitchen.

Joel explained that since April 2015, when the taps were switched over to craft beers, Pot Belly customers have been able to choose from over 380 different beers in just two years, with a regular turnover of taps. He hopes the brewery will further enhance the Bar’s reputation as a place to enjoy, sample and learn about beer as they produce what would be described as “pilot batches” in a large commercial brewery. His ambition is to brew a range of similar styles to the existing variety which has proved popular with customers. 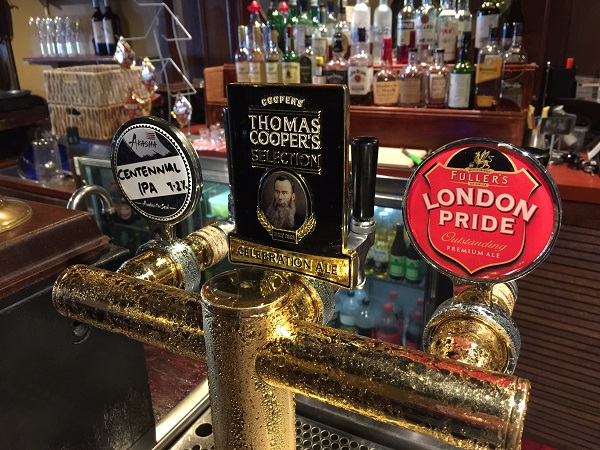 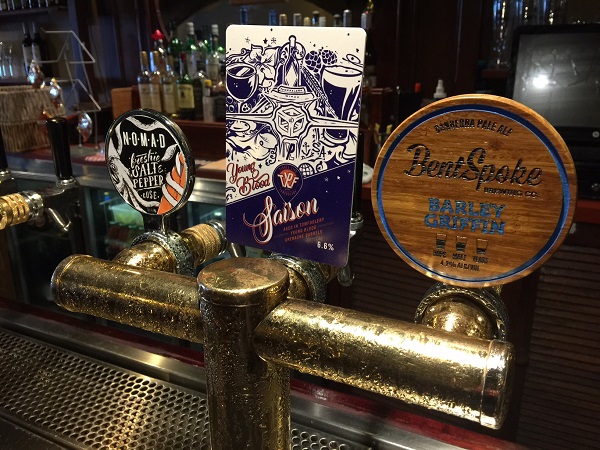 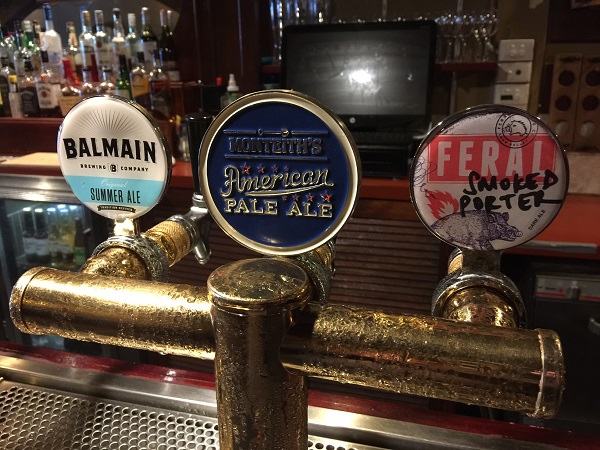 The new license allows Pot Belly to operate as a small commercial brewery as well as a distillery, making it the third local distillery (after Canberra Distillery, which specialises in gin and Baldwin, specialising in bourbon). Joel hopes to be able to manufacture and sell small barrel whisky, vodka and gin.

The new brewery equipment has displaced the previous commercial kitchen and the menu has been updated to offer a range of fast and tasty pizzas, listed on the menu at the Pot Belly website. 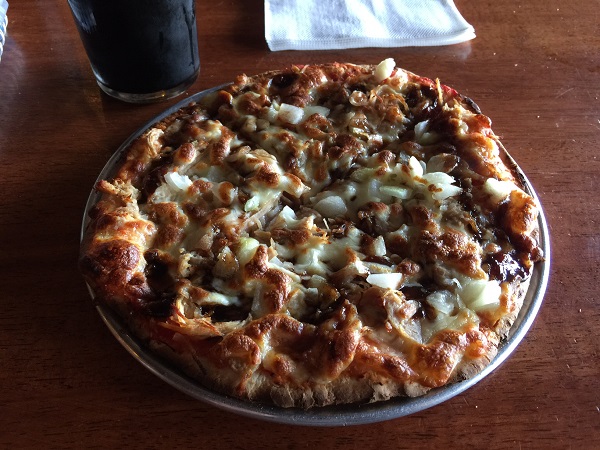 But by far the most important and tasty item on the Pot Belly menu is the range of beers on their nine taps. Their famous tasting paddles still offer “$10 for any three beers, anytime” in 200ml glasses (i.e. a pint made up of your own choice of three delicious craft beers). 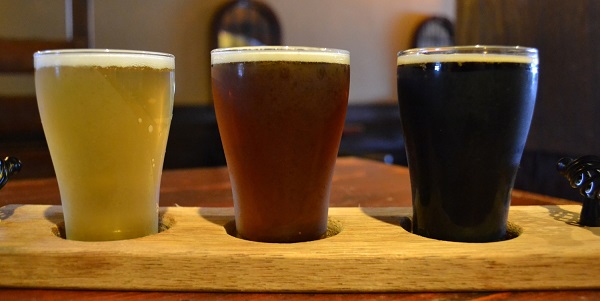 And most importantly, the staff at the Pot Belly are happy to talk about beer, explain its origins, flavours and how it is made. Joel’s pride in his long bar is exemplified by the enthusiasm with which he talks about each of the beers he serves and how it fits into the “Beer Judging Certified Program” Style Guide, which is a template for what he wants to do with his small scale brewery. I can see myself trying all his brews and perhaps even trying to replicate some of them myself using my own homebrew kit and supplies from Colin at Brew Your Own At Home in Kambah. 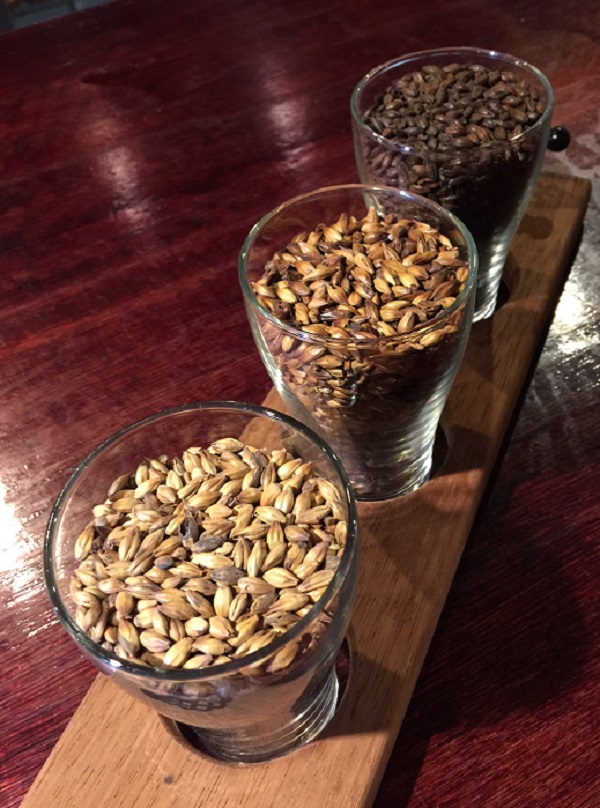 For such a uniquely long-shaped bar with a strong focus on craft beer, Pot Belly also offers the aforementioned pizza menu, a rustic beer garden, and for a growing army of gamers across Canberra, a regular Wednesday night gaming experience during which customers can bring their own board games or choose to play from the large variety kept in the bar. Regular gaming hosts are available to lead people and show them how to play and a facebook group has been set up to let people know what to expect each Wednesday night. You can even enjoy a quiet game of chess on the specially made long tables and church pews which help give Pot Belly its unique charm. 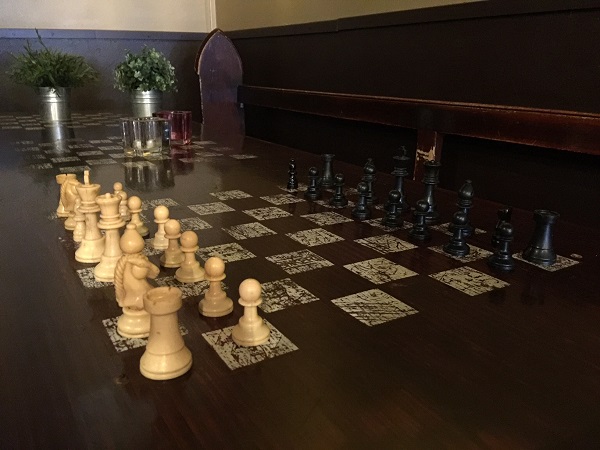 You can visit Pot Belly most days of the week. They close Mondays but are open 12 until late Tuesday to Sunday. The tasting paddles are well worth the visit. Pot Belly has also just been added to Dave’s Beer Off The Beaten Track Canberra brewery tours.

Joel is an old mate, and I can say from experience that his beers are top notch. $10 for the taster is a solid beer-investment.

$10 for a paddle of 3 x beers? Any choice of beer as well? Hot diggity that’s good value and a great way to sample the craft beer scene. Great looking pizza too.

Ryan Hunter - 3 hours ago
is this a news page or a lobby group? every 2nd article is about cyclists wanting more and more money spent on them. View
Jim Reid - 3 hours ago
Act Gov't is only interested in Geocon developments than anything to help sport nor cycling facilities.....a bit ironic for t... View
Carley Weiss-Kelly - 3 hours ago
Brian Weiss thoughts 💭 View
News 35

theroundone - 4 hours ago
Who's getting punished, though, asides from law abiding rates payers in this city? A racial or sexist epithet is treated more... View
Capital Retro - 17 hours ago
Violent home invasions targeting keys for owners' luxury cars are now out of control in Canberra. Very few details are subjec... View
Daniel Lesky - 18 hours ago
Jason Malcolm could be worse not like she needs to go to charnwood View
News 11

Meg Redmond - 5 hours ago
It’s a waking nightmare Linda Gee the only flight I was able to see tday was 24,000 economy one way View
Linda Gee - 6 hours ago
Jeez, that's not good. 😥 View
Meg Redmond - 7 hours ago
I’m not sure it is Linda Gee he is struggling to get one at 4000.00 showed available to me yesterday he tried to book it an... View
Food & Wine 1

Buck Johno - 13 hours ago
From what I remember of night rider busses it was only over summer. View
Property 29

@The_RiotACT @The_RiotACT
A trial has been launched to reduce conflict in Canberra hospitals, and make the healthcare experience less stressful for staff and patients https://t.co/PcXGCHUbcG (49 minutes ago)