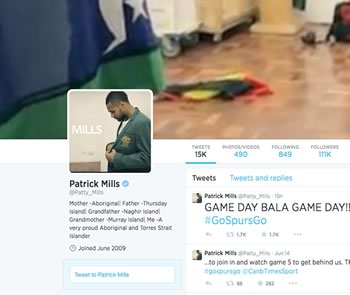 A proud day for local sports as Canberra’s own Patty Mills showcased his incredible talent in the US, helping the San Antonio Spurs to take the NBA title.

The 25 year old basketball player attended Marist College and served as a ball boy for the Cannons around 2000. He was selected for the ACT under 18 squad to compete in the Australian National Championships and his career took off from there with a scholarship to the AIS and his signing for Californian college basketball in 2006. The rest as they say is history.

As point guard, Mills (number 8) scored 17 points in the title decider, including five three-pointers, helping the Spurs win over the Miami Heat (104-87) and secure the series.

He also happens to be one of the first indigenous Australians playing basketball in the NBA.

simm - 20 minutes ago
PLANNING the main entrance on Canberra Avenue is a sensible and practical choice . Franklin street Cafe/Retail strip already... View
abdul mutawe - 29 minutes ago
Having performed building works for Mrs Liangis over past decades, I have to say she is very astute, capable and fair. And sh... View
News 124

Lyn Kemp - 45 minutes ago
Goodbye Zed, hopefully. You've done absolutely NOTHING for the ACT 😖😖 View
Capital Retro - 4 hours ago
"Climate change, gender equity, citizenship, refugee policy, economic and cultural renewal, and a First Nations Voice to Parl... View
Shane Carter - 5 hours ago
Who-da-thunk-it, the man who’s voted against the ACT having self governance. His seat under threat from the ACT calling him... View
Community 8

bikhet - 46 minutes ago
This seems to be your thing. Never knew the pluviometers were there. Is their output available on the web somewhere? I'm a bi... View
brendan eyers - 2 hours ago
Cool to know what the cubes are, though I've never noticed one. Worth a mention that there are a hundred or so pluviometers a... View
brendan eyers - 3 hours ago
They are called standpipes. Connected to mains water and used to collect water samples for testing. View
News 2

MERC600 - 52 minutes ago
Yep , full marks to the Raven. What I would like to know is what would you pay for a coffee to be delivered by this drone mob... View
Capital Retro - 2 hours ago
The next step is to equip the ravens with lasers. Death to all drones!... View
News 2

Neil Chandler - 4 hours ago
Anthony Willing but i have concerns about how it would work in an evacuation where the lifts can't be used by people with mob... View
Opinion 116