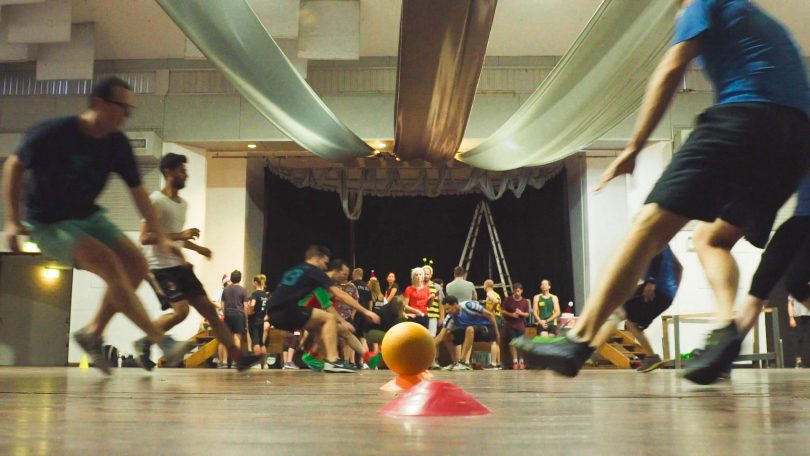 An Urban Rec dodgeball game in Sydney. Canberra will be hosting its own leagues from mid-October.

Are you rubbish at games but still love your sport, especially the social side? Then sports club franchise Urban Rec may be your bag.

Originating in Vancouver, Canada, Urban Rec spread to Sydney where it has 8000 members and is now kicking off in Canberra.

Canberra operator Donald Thomas believes the sports loving capital with its steady stream of young workers from all over Australia will be a perfect fit for the Urban Rec model, which covers a range of different games and creates leagues where people can stay active, meet new friends and have fun.

Mr Thomas joined Urban Rec as an individual when he moved to Sydney and found it a great way to make friends quickly in a new environment.

“A lot of people are really busy and don’t want to train twice a week,” he said. “We get a lot of those people who can come quickly after work, play a game and go home.”

The 30-year-old full-time dad and former boot camp operator has since moved to Canberra to be closer to his wife’s family and has brought Urban Rec with him, after forging links with the Sydney owner. If it is successful other Australian cities may join the Urban Rec family.

He said offered sports included touch rugby, beach volleyball, soccer and games not played elsewhere such as dodgeball, as well as the multi-sport option, in which teams alternate between sports from week to week.

Teams or individuals can register for a fee which covers the placement in a league or team and venue hire but not personal injury insurance. 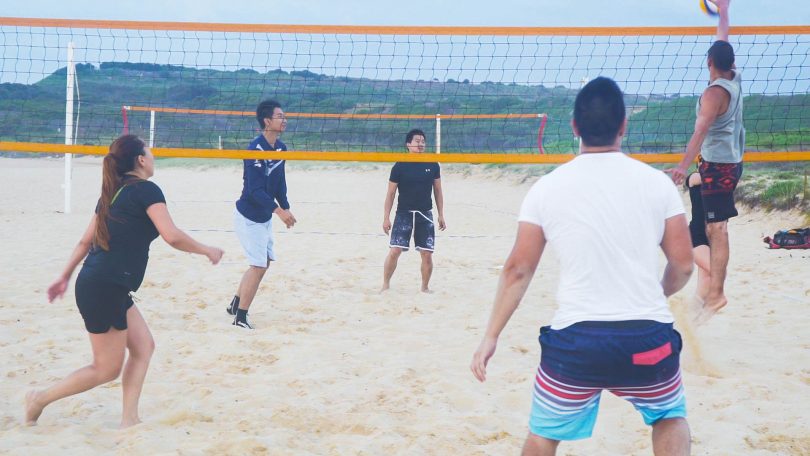 Beginners and people who have never played sports are welcome.

“Urban Rec was founded by people who were picked last at school and didn’t want to go to the gym, didn’t want to be in a team where you dropped the ball and your team-mates looked at you horribly for losing the game for the team,” he said.

“It’s really about sportsmanship and having fun.”

There are no finals and teams also win ‘rec’ points for being good sports such as bringing oranges for the opposing team. The team with most rec points at the end of season gets the same prize as the winning team.

Urban Rec can also arrange special events such as corporate team building days, charity fundraisers and celebrations. There are also a range of membership perks.

The response so far has been promising and Mr Thomas believes there should be about 20 teams registered for Urban Rec’s official Beach Party launch at the Lyneham Beach Volleyball Facility on October 8.

He promises a fun party atmosphere and the opportunity to have a go at all the sports on offer.

You can also visit https://www.facebook.com/urbanreccanberra/

Brindie - 14 minutes ago
If paid parking was introduced at this venue, users would simply park their vehicles in the nearby streets of Wright and then... View
enjayjay - 1 hour ago
Have you been there? Its would have more participation than ANY other sport in the ACT - every single day - not just weekends... View
enjayjay - 2 hours ago
Have you even been there? Thousands of people use it every day. It draws people from all over australia and contributes milli... View
Sport 1

mathiaseverson - 16 minutes ago
Great to have Bayley as part of our team here in CBR and representing us in Poland! View
Opinion 94

@the_riotact @The_RiotACT
The ACT has recorded 24 new #COVID cases - the same as yesterday. Earlier this morning, Federal Health Minister Greg Hunt announced that 70 per cent of the eligible Australian population was fully #vaccinated https://t.co/6nHVps2YUs (39 minutes ago)