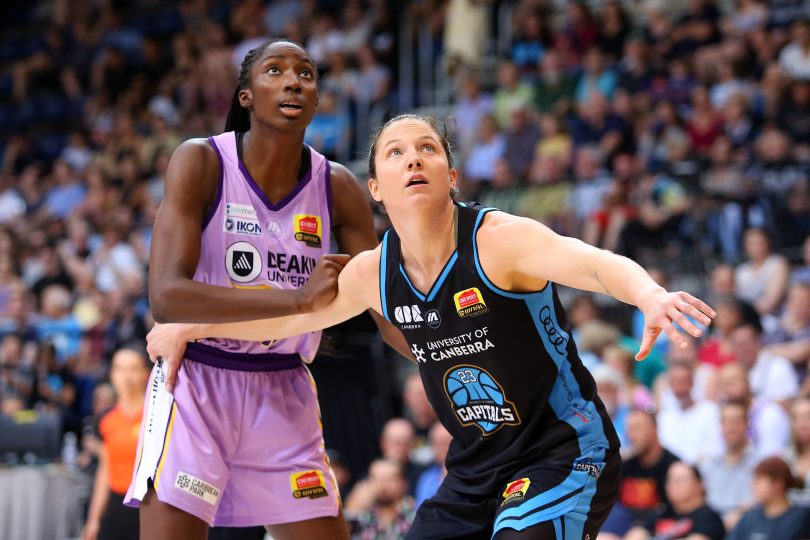 The Capitals will now look to win back-to-back championships back in Canberra after claiming game one 82-80 against the Southside Flyers in the 2019-20 WNBL Finals. Photo: Supplied.

The UC Capitals are now one game away from claiming back-to-back WNBL championships after the Canberra side scraped past the Southside Flyers 82-80 in a thrilling match at Dandenong Stadium on last night (1 March).

The Caps will have the chance to wrap up the championship back home in Canberra after they made it three straight victories in Victoria this campaign as proceedings between the two went right down to the wire.

With the scores locked at 80 apiece, Capitals point guard Olivia Epoupa weaved her way into the paint before hitting a shot off the glass to put her team up by two with just under 90 seconds remaining in what ended up winning the game for the Caps.

Flyers guard Leilani Mitchell had the responsibility of sending the two outfits to overtime, but some great defence saw Mitchell miss her two-point attempt and the Capitals will now look to secure the chip back home.

MVP Kia Nurse finished with 19 points after having just six at the half for the travellers, while Kelsey Griffin finished with 18 and a monster 12 rebounds. Marianna Tolo had another fine outing with 15 and clutch performer Epoupa had 14 points, nine rebounds and six dimes.

For the hosts, Rebecca Cole led the way with 23 points and seven assists in 35 minutes of play, while Mitchell signed off the night with 15 points.

The return of captain Jenna O’Hea after seven weeks out through injury just couldn’t propel the Flyers over the line, but the 32-year-old made had an impact off the bench with 14 points and six boards in total.

Tolo set the tempo for the reigning champions as her quick work inside saw her finish with seven points on 3-4 field goals as the Capitals ended the opening quarter of the finals series with a two-point lead. O’Hea received a loud ovation from the home crowd as she earned seven points (3-5 field goals) to lead her team’s scoring.

With zero points in the first 10 minutes of the game, Caps’ Griffin was more aggressive in the second quarter and used her footwork in the paint to perfection as she raised her tally to eight points along with four rebounds. The home side continued to be efficient shooting the ball, especially Cole who tore through the Caps to score 18 points at the half as the Victorian outfit led 47-43.

The Flyers shot at a very good rate of 53 per cent from the field while the Caps could only manage 42 per cent.

The third period of the match saw Nurse spark into life, which she has made a habit of doing all season long as she knocked down a couple of threes in quick fashion to get her offensive game up and running. O’Hea managed to keep Cheryl Chambers’ women in front after finishing the quarter with her eventual 14 points. Mitchell hit a dagger shot in the dying moments of the third to give the Flyers a six-point advantage heading into the final 10.

Paul Goriss’s team adjustments since the half time interval paid dividends as they shut down the impacts of Cole and O’Hea in the fourth.

After missing a three-point attempt, Nurse regained her composure to knock down a big trey and put the Capitals up 80-78 with just minutes remaining.

Southside managed to get the scores locked at 80-80 with two minutes left and from that there was a sense that the tie could spill to overtime.

However, Epoupa decided to take matters into her own hands as the French international charged towards the rim and banked in her shot to put the visitors up 82-80.

Just when it seemed that maybe the Flyers were out, the crowd at Dandenong erupted when Nurse was called for setting an illegal screen with just a little over a minute left.

After the Caps missed the chance to extend their lead past two points, the Flyers had one last chance on one final possession with 15 seconds left. With the shot clock turned off, Goriss’s team smelled the danger early as a couple of bodies met Mitchell whose shot did not fall and the final whistle blew to cement the Caps’ win.

The Capitals will now travel back to Canberra and attempt to wrap up back-to-back championships with game two at 7:30 pm on Wednesday night (4 March) at the AIS Arena.

Tickets can be purchased from Ticketek.