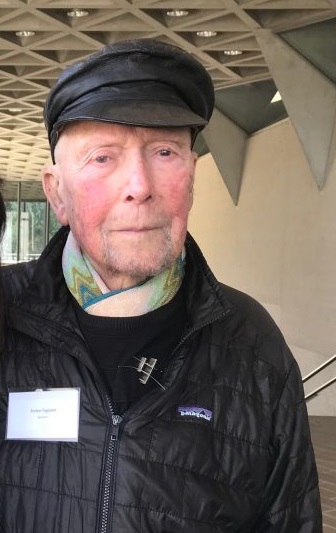 Celebrated modernist architect Enrico Taglietti, responsible for some of Canberra’s most notable buildings, has died at the age of 93.

Italian-born Taglietti (1926-2019), studied in Milan and came to Australia in 1955 with an exhibition of Italian design for David Jones. Visiting Canberra tasked with finding a site for the Italian Embassy, he fell in love with the city ‘untouched by ugliness or history . . . [with its] inhuman overwhelming silence . . . infinity and eternity revealed’.

He designed the Italian Embassy, and continued, like his compatriot Aldo Giurgola, to live in Canberra, designing several of its most distinguished homes as well as the Dickson Library, the Italian Club, the Apostolic Nunciature, Giralang Primary School, Polish White Eagle Club and the War Memorial Annexe in Mitchell.

In 2007 he was awarded Australia’s most prestigious architecture prize—the Royal Australian Institute of Architects (RAIA) Gold Medal for Architecture.

Last year, the Design Canberra Festival celebrated his work, personal style and contribution to the nation’s capital, and gave him the opportunity to have his say on Canberra’s development in a symposium in his honour at the National Gallery.

He challenged the City to the Lake and West Basin plans, warning against allowing “private profit masked as beneficial development” to alienate ordinary citizens from the lakeshore.

He and longtime collaborator, Gianmatteo Romegialli, proposed a line around much of the current shoreline beyond which no private development would be allowed, saying West Basin should be “kept free of interference”, and is “very concerned” by some of the Kingston Foreshore development as a model for what could happen elsewhere.

“The lake and the lakeshore are the breathing lungs of Canberra,” Mr Taglietti said, in a presentation that also called for population inside the original Canberra planning envelope to be limited to 100,000, moving further growth to the town centres.

Mr Taglietti is recognised as an important architect and a leading practitioner of the late 20th-century organic style of architecture. His unique sculptural style draws upon Italian free form construction and post-war Japanese architecture.

The Design Canberra Festival website says Mr Taglietti’s distinct and highly personal design character is expressed through his use of unusual sculptural shapes and angles, cantilevered planes of roof and deck, and concrete.

“His contribution is significant, as is his attachment to our city. Mr Taglietti’s thoughtful detailing, aesthetics and sense of place have helped to shape Canberra,” it says.

Mr Taglietti is survived by his daughters Tabitha and Tanja and son-in-law Michael. His wife Franca died 12 years ago.

The family is planning a private service to remember his life. It has asked that donations be made to charity in Mr Taglietti’s name in lieu of flowers.

And to think we demolished Center Cinema!

Margaret Freemantle – since when?

The building is still there. It was the bland Civic Cinemas building next door (Greater Union) which was demolished.

Sad to hear of Enrico Taglietti’s passing. I applied to work for him when I left school prior to heading for uni. Unfortunately I wasn’t successful and ended up working for another architectural firm. I did have some contact with him and his office in later years, he was unique, an innate, organic designer. He has left a remarkable legacy in this town. Oh….. and I don’t think he would object to being described as slightly eccentric…….. and a little irascible. We differed once on whether New Parliament House’s flagpole was a design “fail”. I recall him being less than impressed with it.
PS I think you should also include Flynn Primary School as one of his signature works and one very much defended by its community when threatened by the charlatans of the ACT local government

May his presence live on in his remarkable buildings.

Sad news. What a giant of Canberra architecture. His stunning houses in Aranda, Cook and Wanniassa look unusual from the outside and are actually totally amazing on the inside looking out.

I’m also in 100% agreement with him on moving Canberra’s population growth into the town centres. Not the current ACT government planning model.

Imagine how much easier the new bus system would be for Tuggeranong, Belconnen and Gunghalin residents if their jobs, services and amenities were primarily based in their town centres.

Not concentrated in places like Civic, the airport and parliamentary triangle.