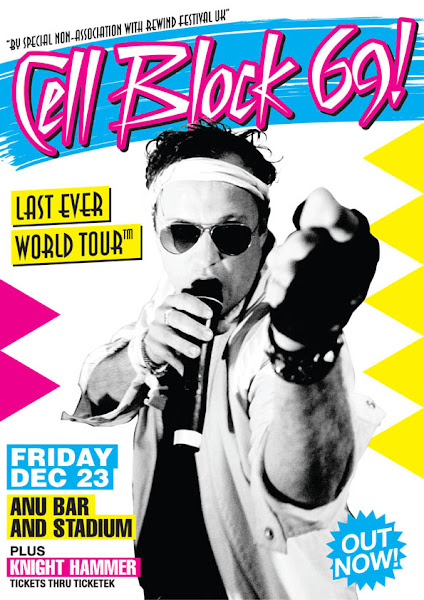 A Thunderous Drum Roll (like the pounding fists of Jean-Claude Van Damm) announces the return of The World’s Greatest Rock Pop Band™ CELL BLOCK ’69!!! Unbelievably, the band appear to be reforming for the 10th year in a row to perform a LAST EVER WORLD TOUR™ in Canberry on December 23rd.

Tickets available through ticketek http://premier.ticketek.com.au/shows/show.aspx?sh=CELLBLOC11
Or at the door (if not sold out).

Once a year the stellar CELL BLOCK 69 return to produce a night of glorious rock pop complete with back-lit venetian blinds, coloured-smoke machines, sax solos, stadium rock poses and audience members falling to their knees with fists clenched tight in the international rock language for “feelin-it”.

On Friday December 23 Cell Block’s patented ‘LAST EVER SHOW’ will see the ANU Refectory transform into a Rock Stadium, as the band guide the audience through a cornucopia of hits that were “tragically stolen” from them by other, more celebrated, artists. The band, whose stunning 80s musicianship is matched only by their wardrobes, will no doubt be joined by a cavalcade of guest stars from the modern Canberrian-Rock pantheon to perform their New Wave masterpieces, 90’s mega-mixes and Trash Rock anthems.

This is an unmissable night of Retro Pop Rock for the twisted modern mind!!

No strangers to controversy Cell Block have recently been sued, again, by The Artist Currently Known as Prince for claiming the song Controversy was their own Hit – sounding virtually identical to their little known track Contention. The band has repeatedly denied that the upcoming World Tour is merely a vehicle to pay legal costs. Either way fans of the 10 piece band (all, miraculously, named Corey) will collectively be losing their rats-tails in excitement as the band announce the upcoming Australian dates to coincide with their stadium tour of Indonesia and PNG.

A statement issued via their band Manger Corey Epstein states that the band will be available for interviews from their respective islands in the unspecified Carribean and castles in Generic Europe.

Band frontman Mr Le Corey Michaels, while stroking his new snow Leopard Birundi III, was quoted as saying:
“This is another opportunity for us to set the record straight – we are the greatest rock band the world has ever known – and we intend to drag the world kicking and screaming to an appreciation of this fact.”

Tensions between Le-Corey Michaels and lead guitarist Corey Axelrod have been well publicised and many have been attempting to read between the lines of a statement issued by Mr Axelrod which simply reads: “Rock ‘n Roll. Alright. Woo!”

With words like this one wonders how long the simmering tensions can be contained.

Regardless of what happens off stage Cell Block ’69 will take you on a fists-in-the-air journey that you will never forget. At least not before they remind you again next year!

For more information and interviews:
http://www.facebook.com/cellblock69

Cool, I though so. They were pretty good. I might have to bring out the hypercolour shirt

Sax, drugs and rock and roll.

Just a quick note to say that the Maestros of Viking Rock “Knight Hammer” will also be performing at this show.

And in light of the evidential unquenchable thirst of Cell Block 69’s awesome Canberry fans, there will be 2 BARS opened with more bar staff at the ANU show this year !!!!

Christine Moulet - 39 minutes ago
why not? View
Kura Rakete - 48 minutes ago
I like Thips Pad Thai in Church offices Belconnen... it has authentic street hawker flavour but very restricted opening hours... View
Lin Van Oevelen - 3 hours ago
I am still looking for a great pad thai on the Northside. One of those simple dishes that requires real skill to get right, I... View
News 4

Tamara Curtis Gordon - 1 hour ago
Ridiculous View
Tim Batten - 2 hours ago
What a absolute joke. View
Lori J Tas - 3 hours ago
Yup, to me it's just unfathomable that someone who holds a knife to their own child's throat gets a far lesser sentence than... View
News 9

Craig McPherson - 1 hour ago
Tristan Melhuish oh yes, and hey I get this language from government - bureaucracy at its finest - but from a journalist - su... View
Tristan Melhuish - 1 hour ago
Craig McPherson or signalising an intersection when they are installing traffic lights? 😂 View
Alby Mack - 2 hours ago
Simon Southwell this is separate to the bloody tram. That is still going through approval process and Barr wants to build it... View
Opinion 57

Elysia Su-Chien Fisher - 1 hour ago
Melinda Gonczarek i met my best friend through work when i moved and subsequently my hubby. Yea ok I understand its not the e... View
Melinda Gonczarek - 2 hours ago
Elysia I'm one of the good ones lol Actually one of my closest friends and I met through work and she was from Melbourne (has... View
Laura Gilbert - 2 hours ago
I moved here 13 years ago. A lot of people mentioned this to me but I made new friends over time and those friends have evolv... View
Opinion 204

Alan Sargeant - 6 hours ago
Celebrate it on 1 January, it means one less Public Holiday for all. View
Alan Sargeant - 7 hours ago
This was the date that someone from Europe officially came to the east coast. The west coast had been previously visited seve... View
News 9

Thai is one of my favourite cuisines to cook and eat. Fresh humble ingredients perfectly balanced to achieve harmony between...
Opinion 24

It's the week before the national holiday that causes division across the country, so it wouldn't be right for me...
Opinion 57

@The_RiotACT @The_RiotACT
A former speechwriter for Charles Perkins and a former staffer for Christine Milne will fight the next federal election for the ACT Greens https://t.co/Stan0SQMlP (36 minutes ago)

@The_RiotACT @The_RiotACT
Businesses in Queanbeyan's industrial area are being urged to be aware of toxic runoff and not drain the health of local waterways https://t.co/Kvn264mwjs (2 hours ago)