Before one of my best friends moved to Canada (I’m not envious, I promise) we had a regular lunch date called Pie Thursday. On Pie Thursdays we’d buy pies from either Dream Cuisine or Flute Bakery and chocolate brownies from the health food shop at Griffith shops, and wolf them down while fighting off seagulls by the lake.

Pie Thursdays were far from glamorous, but they were inexpensive and pretty low fuss – two things that every cheap eats meal should be.

I was missing my bestie last week, and I also hadn’t eaten a good meat pie in a long time. I set out to recreate the best part of Pie Thursday (the pie, obviously) on my own, and ended up at Dream Cuisine only because Flute Bakery doesn’t do EFTPOS and I didn’t have cash.

Dream Cuisine is on Whyalla Street in Fyshwick, just around the corner from Sportsman’s Warehouse. What started out as a cosy little cafe was extended in April last year and now has a large indoor seating area, as well as outdoor tables. There’s free Wi-Fi, and while the shop no longer has an a la carte lunch menu, it’s always packed full at lunchtime with business people and tradies enjoying pastries, macarons, baguettes and some very delicious-looking pizza slices.

When I arrived for an early lunch I couldn’t see any pies in the display cabinet at the counter, so I asked if there were any in the kitchen. Surely they couldn’t have sold out of pies by 11.30am? It turns out that Dream Cuisine doesn’t make pies anymore, though I’m not sure if this is a permanent decision or just for the short term. Either way, it’s bad news for Canberra pie lovers – Dream Cuisine’s beef and beer pies were some of this city’s best. 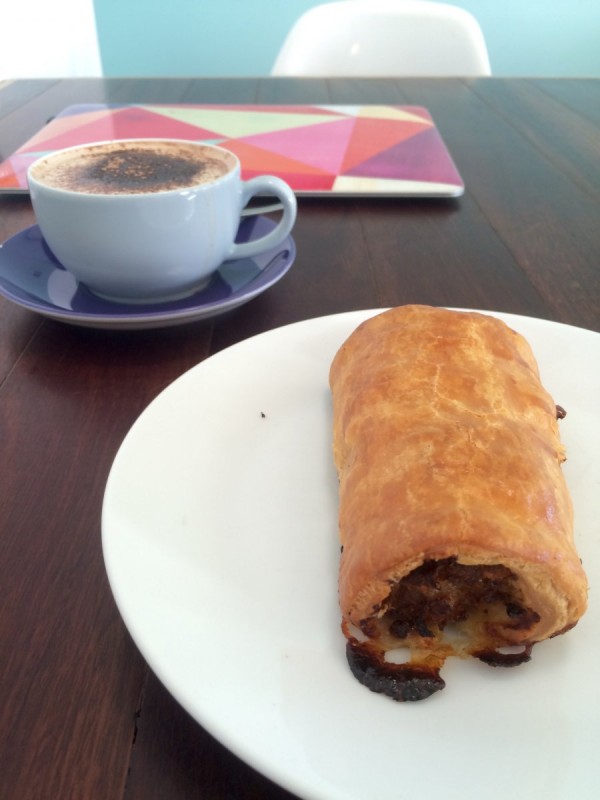 Since I was already at Dream Cuisine, I settled for a sausage roll with tomato sauce (they had run out of tomato relish) and a hot chocolate, which came to a total of $9.50.

I should say that ‘settled’ is a term I use to mean ‘had my heart set on a pie and this was the next best thing,’ because Dream Cuisine’s sausage rolls are really good. The pastry is flaky and buttery and the filling is about as far away from the wood pulp-like gunk that you get in shop bought versions.

The hot chocolate was good, but if you’re in Fyshwick and you want a hot chocolate I would personally recommend Flute’s – it’s more decadent and creamy.

Dream Cuisine also runs Little Dreams, which serves coffee and pastries at The Hamlet on Lonsdale Street, and while I haven’t had a chance to visit yet it looks every bit as good as its big sister.

What: Dream Cuisine
Where: 9/18 Whyalla Street Fyshwick
Opening hours: 7am to 4pm Monday to Friday, 8am to 2pm Saturday
Website: http://www.dreamcuisine.net.au/

I don’t think this qualifies as cheap eats, prices have been way to high since the day they opened but ther is nothing else in walking distance from the many businesses around. I look forward to the day a competitor opens up nearby. Coffee has improved lately but staff churn seems to be quite high which could help to explain their on again off again menu

I haven’t had Dream Cuisine’s pies but if their quality is anywhere near as good as their delicious pastries, then I’d be keen to try them. Shame that the pies are not on the menu at the moment.

Simon Wheaton - 3 hours ago
Reading reports from back then, he was even dodgier than our current politicians! "It might be noted, incidentally, that O'Ma... View
Lifestyle 16

Jennifer Brodie - 3 hours ago
Are they selling tulip bulbs this year ???? View
Suzanne Mansfield - 9 hours ago
Karina Curwain rats and damn! View
Dawn Glover-Schwalm - 9 hours ago
Til Bijou me too!! View
News 32

Dave N Ange Greer - 7 hours ago
Why is there no comparable list of Queanbeyan region sports stars....? Also how many James Bonds have come from Wagga 🤣 View
Dong Wong - 8 hours ago
look at the face on the dog hahaha View
Alan Byrne - 8 hours ago
Keni Kawaleva all day bra View
News 222

Julie Macklin - 7 hours ago
Benjamañana Fergusunshine The neighbours on your southern side likely won't. View
Kelly McGrath - 8 hours ago
Christine Young my mother and father inks got “free trees” from the govt 40 years ago! We now have the 2 biggest gum tree... View
James Vetos - 9 hours ago
Quite a few comments about price per tree. Does the total cost include the planting of the tree and ongoing follow ups to wat... View
Property 14

Renee Thompson - 10 hours ago
Should be entitled to both as I see it as one is purely for helping keep business a float hoping they survive the outcome and... View
Opinion 20

Multicultural Eats: Enjoy a taste of Diwali with a festive meal

@The_RiotACT @The_RiotACT
One look at this week's newsletter and you'd think kangaroos had taken over Canberra... hop to it! Subscribe now for all the latest stories straight to your inbox https://t.co/XVdXBWjSeq (8 hours ago)

@The_RiotACT @The_RiotACT
Planning is well underway for the inaugural 'Great #Queanbeyan Duck Race Festival' next April that will see thousands of rubber #ducks float down Queanbeyan #River to raise funds for local charities https://t.co/VWu1CC4RSv (9 hours ago)

@The_RiotACT @The_RiotACT
'Brave' Sally Hopman has seen her first #snake of the season, and it was enough to drive her to drink (so at least the experience wasn't all bad) https://t.co/I12xIs6Ftp (10 hours ago)