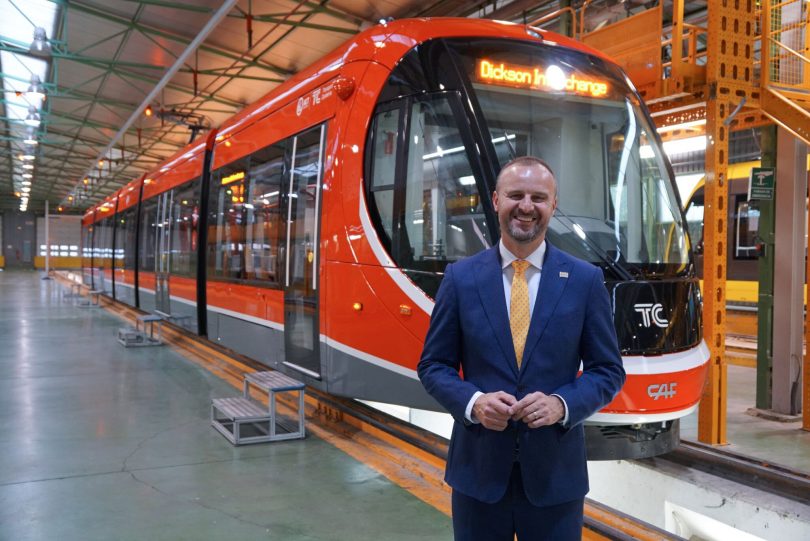 Chief Minister Andrew Barr and the first of 14 light rail vehicles that will be used on Stage 1 of the Canberra light rail network.

Chief Minister Andrew Barr has inspected the first light rail vehicle that will carry passengers on Stage 1 of the Canberra light rail network.

This vehicle will be shipped to Canberra in the next few weeks, and is the actual vehicle, in all its livery, that will be running down the Stage 1 corridor.

Mr Barr last week visited key partners in the light rail consortium in Europe to discuss the progress of the project as well as opportunities on future stages.

In Germany, he met with the operator of the light rail Stage 1 network ‘Deutsche Bahn’, which is one of the largest transport companies in the world. 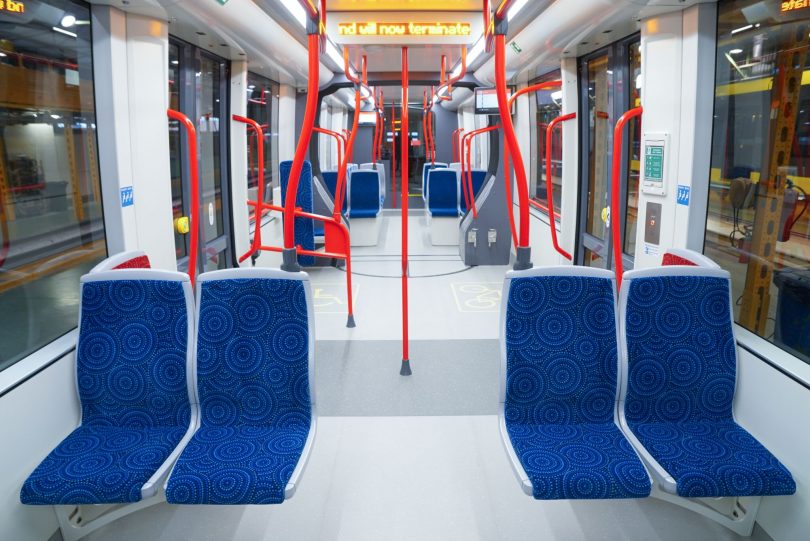 “As the construction of the project continues, our discussion will focus on the operation of the city’s first light rail service and opportunities for integration of the services with Stage 2, connecting the city centre to Woden,” Mr Barr said.

He also visited the Spanish factory where Canberra’s light rail carriages are being made to inspect the first units as they roll off the production floor. The factory inspection is part of the Government’s contract with the Canberra Metro consortium.

“The construction and operation of Stage 1 of the citywide light rail network attracted some of the biggest multinational corporations in the world. With planning on Stage 2 underway, the Government is keen to discuss the development of the project with the industry,” Mr Barr said.

He was due to meet Acciona – major sustainable, infrastructure, renewable energy, water, and services business corporation – to discuss infrastructure investment opportunities in Canberra. The company has recently built the biggest photovoltaic plant (24 MWp) in Australia at Royalla as a contractor for FRV (a leading global utility-scale solar developer).

The estimated cost of the delegation for the Chief Minister’s office is $24,000.

Don’t think red and grey suits our green city. These colours have been popular in hotel suites etc but I think they’re going out of style. I guess the red looks safe but I wish our trams were in our ACT colours of yellow and blue.

True, not many seats at all. Here’s a snip from another site – The ACT government will spend about $65 million on a fleet of 14 trams, each of which will be 33 metres long with 66 seats and capacity to carry 207 people.

Note the lack of seats. They certainly look great, before the announced advertising graffiti is added.

Stephen Saunders - 27 minutes ago
Look, I don't oppose this, it can never be remembered too often. But the first priority that needs it own Canberra memorial i... View
News 17

chewy14 - 30 minutes ago
Ha, that should read uninformed, not uninformed. BJ, on that link you've provided, have you actually read the ICRC report on... View
chewy14 - 47 minutes ago
No, To be honest, It's because I think you're uniformed on the scope and causes of the problem, the research that has been oc... View
bj_ACT - 2 hours ago
I’m not just criticising this project from 2014, I’m criticising two decades of broken promises, failed projects and the... View
News 199

Jess Thomas - 33 minutes ago
David Deb Cossart that's the thing: people who can afford the fine can afford to speed. Changing this would mean that no-one... View
Liam Searle - 1 hour ago
Make the speed limit suit the road, change it back to 60! View
AliciaAnn Dowd - 4 hours ago
Werner Schenk I agree with you. There is already a system in place to assist people manage payment of their fines. SPER allow... View
Community 41

Sam Oak - 54 minutes ago
The government needs to stop fluffing about trying to figure out how to get the tram over the lake and build the Belconnen to... View
Community 10

Jennifer Albs - 1 hour ago
He is great player and pretty talented man, but his behaviour over shadow everything and not to mention mode swing, plus acti... View
Stewart Mcdonald - 2 hours ago
Lucy Humphreys I love the game but the sterile personalities bother me I think the game representing different social groups... View
Ken Behren - 4 hours ago
He is great for the game... work in progress, yes, but does anyone remember a doubles match that exciting and entertaining? R... View
News 3

@the_riotact @The_RiotACT
The announcement of a new national Holocaust #museum in #Canberra comes in the wake of a report that reveals almost one in four Australians over 18 has "little to no knowledge" of the #Holocaust https://t.co/ojjuaIjCrz (50 minutes ago)