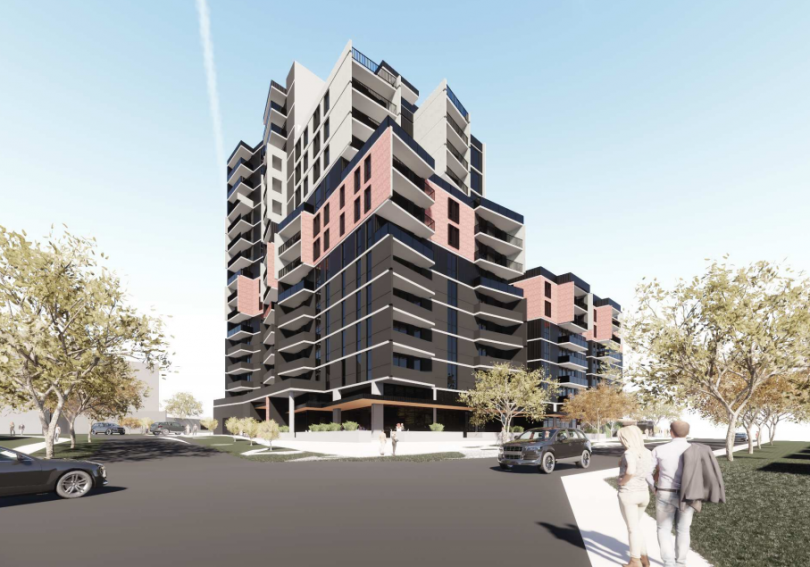 A render of The Establishment, two buildings and 290 apartments. Images: Geocon.

A David and Goliath struggle between a YMCA childcare centre and developers has been resurrected by a new development application to amend the previously approved application for a 15-storey residential tower in Gungahlin.

The new DA from Geocon and Empire Global for The Establishment, formerly known as Air Towers, on a site bounded by Gundaroo Drive, Gozzard Street and Swain Street, seeks to increase the number of units to 290 from 270, remove ground floor residential and replace it with commercial tenancies, remove the mezzanine level and add a pool and spa.

It also adds 27 parking spaces in the basements and at ground level, and makes facade changes.

The development has been a sore point in the community since it was first proposed as twin 26-storey towers, only to be reduced to 16 and eight storeys by the time it was approved in 2018.

Last year it was renamed after Empire Global announced a joint venture with Geocon to help it complete the project.

The YMCA and the Gungahlin Community Council both campaigned against the development and remain unhappy with the planning authority’s reasons for approval and arguments against their objections.

Now this new DA has presented another opportunity to mount their cases. 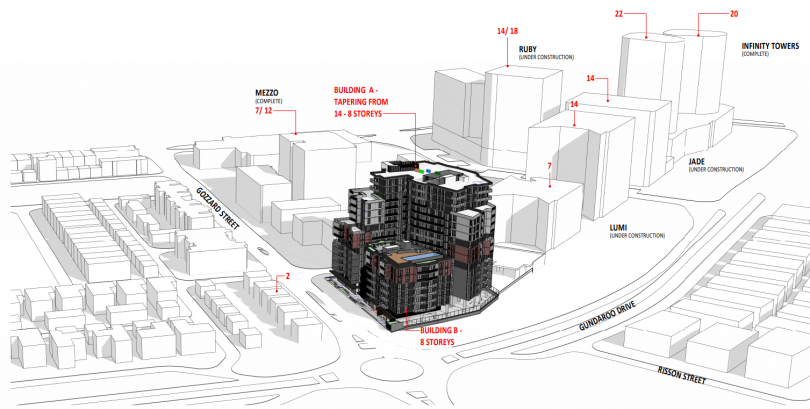 How the development sits in the Gungahlin landscape. As well as towering over the child care centre it will overlook two-storey units.

The YMCA had previously argued this contravened the UN Convention on the Rights of the Child but ACTPLA had argued that screening on the first four floors would impede views and be enough to not breach ACT privacy rules. Ms Taylor says the proposed facade changes remove these treatments.

Ms Taylor says a shared driveway off Swain Street for access to the basement parking and waste collection poses a significant safety risk to families at drop-off and pick up times.

Ms Taylor says the proponents have failed to meet conditions of the approval and will not be able to meet the two-year start of construction deadline in September.

The Gungahlin Community Council, which is likely to submit its own representation, shares concerns about privacy, overshadowing and traffic, as well as the development’s unsuitability for the site.

GCC president Peter Elford said the development threatened the viability of the child care centre, ”not only during construction, when it is almost impossible to imagine how they could operate, but even after, with 100 units overlooking the centre, blocking out a lot of their sun, and 300 car spaces accessible through their tiny little car park”. 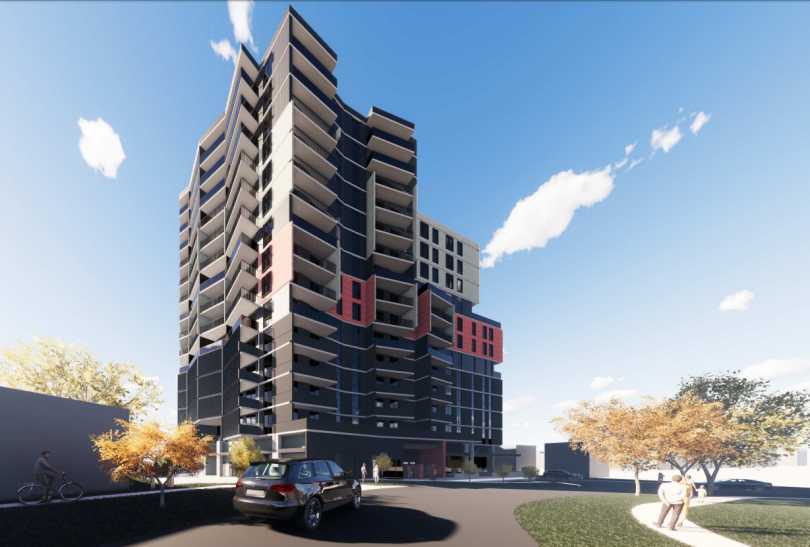 Another view of The Establishment development.

Mr Elford questioned how this situation was allowed to happen.

”There is something inherently wrong here. Just because a developer is developing a site somehow they can effectively crush a business.”

Mr Elford is also concerned about the planning repercussions of the development which originally was meant to be an office block but now was a mini-suburb without adequate infrastructure such as green space and active travel links to service it.

”Where are children going to play? Where are people going to get their outside environment? What other investments are being planned or made to improve the cycling, walking and active travelling between that precinct and the parklands across the road at Gundaroo Drive or the Town Centre?”

The loss of office space also had implications for jobs in Gungahlin, and contributed to the area becoming a dormitory.

Mr Elford said the individual treatment of DAs led to an ad hoc approach to planning instead of one that took an overarching view.

He said there were also question marks over this DA, which addressed criteria that had been superseded by new planning rules for Gungahlin, encapsulated in Draft Variation 364.

The GCC was seeking advice from the planning directorate on this.

What about kinder haven they are surrounded by two tall appartments

A development application in Canberra for a large multi-storey building that completely disregards community concerns? I’m shocked! Shocked I tell you!

Thank God I've just sold my apartment across the road. This area is becoming ridiculous. Can't even park anywhere

We have a big fight on our hands to protect our Early Learning Centre and the broader safety and integrity of the Gungahlin community. Anyone who wants to help or wants more information please email me madeleine.taylor@ymca.org.au.

Madeleine Taylor Is there a petition? I'm happy to sign it. I don't believe the apartments should ever have been built there.

Victor Lee thanks! Written representations to the planning authority will have the biggest impact. Email me and I'll send you information on how to do that.

Geocon has already completely shadowed the childcare centre at CISAC in winter. I am starting to think they don't believe children deserve sunlight...

Alex Troy Elsworth Adkins that’s not fair to say. I’m sure Geocon will sell the children an apartment that has lots of sun light. 😉

Severely inadequate parking with all those towers in that area. Less than 30 spots for 290 apartments???

Andrew honestly the parking is already not fantastic at the centre. Plus the tower being built on the other side of the centre, then the one opposite that... And then the centre having a shared driveway with the complex. It totally sucks, but we all know who (or what... $$$) will win :-( a shame for such an amazing centre too!

Andrew Kristoffersen they are adding 27 more carparks. Each unit will get there own spot

Jerome Kinder Haven down the road constantly has issues with cars being parked/dumped in the carpark. Poses so many safety issues around pickup time as it's around the time people will be arriving home for work.

Jarrod Sean no they aren’t. There are still multiple appartments which will not have an allocated car space. None of the commercial occupancies will have car spots either.

Zoe Zatschler where do you read that?

Jarrod Sean in a meeting with Geocon.

Zoe Zatschler everything I read says different then what you say. The attachment has changed slightly but not much to what they have said now.

Jarrod Sean a lot of the car spaces are end on end, not side-by-side, meaning two spaces will belong to one apartment. There are some singular spots, yes, but still not enough for all apartments and definitely no commercial parking.

Carly Maree - 5 hours ago
I love how people act surprised when this city has some of the worst crime I’ve ever encountered? I lived in Sydney for 8 y... View
theroundone - 16 hours ago
Who's getting punished, though, asides from law abiding rates payers in this city? A racial or sexist epithet is treated more... View
News 1

HiddenDragon - 8 hours ago
The report aired on ABC Canberra news tonight about the devastating impact of the hailstorm on important crop resilience rese... View
News 12