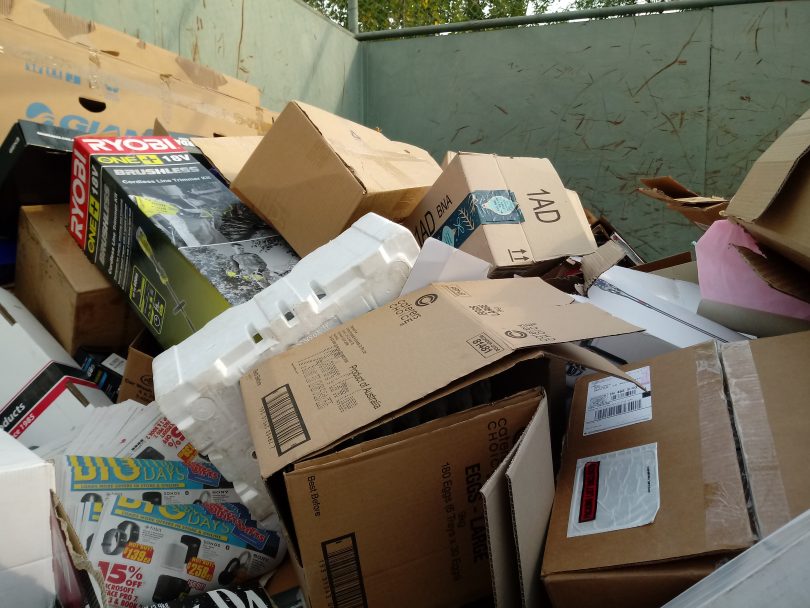 ACT NoWaste is using the busy Christmas period to trial special modifications at Tuggeranong Recycling and Drop-off Centre (RDOC) to keep unwanted foam and plastic packaging out of the waste stream.

The centre in Scollay Street will have an extra bin for polystyrene and loose plastic wrapping, and the paper and cardboard cage has been redesigned so boxes need to be flattened to be deposited.

“When recycling becomes too contaminated, materials may not be able to be recycled,” Mr Trushell said.

Polystyrene and loose plastic wrapping is used to package items like televisions, fridges and washing machines, and were major contaminants as they’re often left inside cardboard boxes dumped at the recycling centre.

“We ask users of the facility to separate any polystyrene and loose plastic wrapping materials to keep them out of the recycling stream, and we have provided an additional waste bin at the Tuggeranong RDOC for residents to dispose of these items,” Mr Trushell said.

“We have also changed the design of the paper and cardboard cage from a large sliding gate to a smaller slot, aimed at ensuring boxes are emptied and flattened before placing them in the cage. This will help reduce the amount of polystyrene blocks making their way into our recycling stream.”

Mr Trushell said that new signage had also been erected to explains the changes, and during peak periods staff would be on-site to provide assistance and advice on recycling.

“We expect to see a lot of packaging over the holiday period and encourage everyone using the Tuggeranong RDOC to help recycle right,” Mr Trushell said.

A Container Deposit Scheme ‘Drop and Go’ pod is also on site.

The Tuggeranong RDOC trial will run until 27 January 2020, and ACT NoWaste may adopt similar modifications at other recycling facilities in the ACT.

The Tuggeranong RDOC is located on Scollay Street.

So are we really recycling this stuff or are we burning/dumping it?

What’s the current recycling method of these Polystyrenes and Plastics? (i.e. Is it just incinerated at nearly 1,000 °C, which I imagine is probably worse for the environment -on Earth 🌏- versus just strapping it to a rocket and launching it into The Sun).

I’ve had a quick skim over: https://en.wikipedia.org/wiki/Polystyrene

Found a patent, almost by accident while researching bicarbonates & isotonics, that might be of interest:

It’s a US Navy Patent, and it would need ‘substantial reworking’ for Polystyrene I imagine, but I am hopeful that some brilliant STEM ‘Chemical Genius’ is willing to crunch over it and maybe adapt it for a different type of hydrocarbon. (I suspect Acetone would be involved at some point in the process).

Might even get awarded an Innovation Patent and/or series of Full Blown Patents by IP Australia.

This isn’t a ‘magic wand’ that’s for sure, it is actually one hell of a long-shot stretch, but it might just inspire some ‘very bright person(s)’ or give them a ‘lightbulb moment’.

Maybe they can team up with all the Nail Salons in Tuggeranong? (Hint: Think Acetone & Solubility).

Fantastic. Lets hope we can keep it going and stop contamination of cardboard waste and recycle the awful polystyrene and bubblewrap packaging that comes with everything . Thankyou!