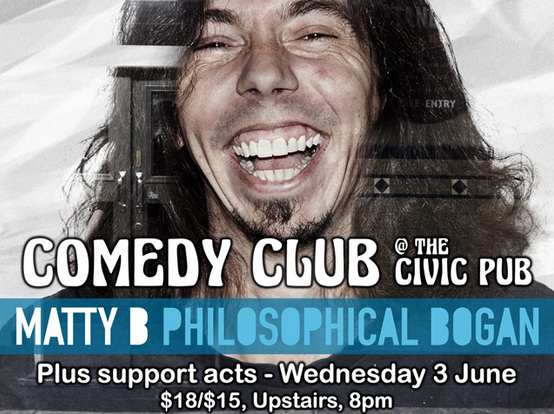 June Comedy Club at the Civic Pub features the philosophical bogan Matty B, along with a host of great acts including interstate guests Mitch Garling and Will McKellar, as well as Shahed Sharify and more.

Matty B is a stand up comedian moulded from the school of hard knocks that is the Newcastle comedy scene. He has a dry, likeable, country charm and is raging up the Australian comedy ranks as a force to be reckoned with. Last year Matty released his critically acclaimed debut album, Philosophical Bogan, and performed across the country in the Adelaide Fringe Festival, Sydney Comedy Festival, Sydney Fringe Festival and supporting US comedy legend, Eddie Ifft. He has recently been seen appearing on The Darren Sanders Show (GO!) and the web series ‘The Jokes On Me’.

‘One of the best comedians in Australia.’ – Mikey Robins

‘Watching Matty B is like getting really high, you laugh uncontrollably and have no idea why.’ – Eddie Ifft

NOTE: The Comedy Club Civic Pub often sells out in advance, so don’t risk it and buy your tickets in advance.

Ken McInnes - 26 minutes ago
Great people great coffee always a smile just a happy place. Well done it’s always nice to see a family working together da... View
Neridah McMinn - 2 hours ago
My absolute favourite place for a Saturday morning breaky 💕 View
Graeme Jeffries - 3 hours ago
I always stop there for a great coffee and toasted cheese and tomato sandwich. A friendly place and service with a smile! May... View
Opinion 2