Climate change is making preppers out of all of us 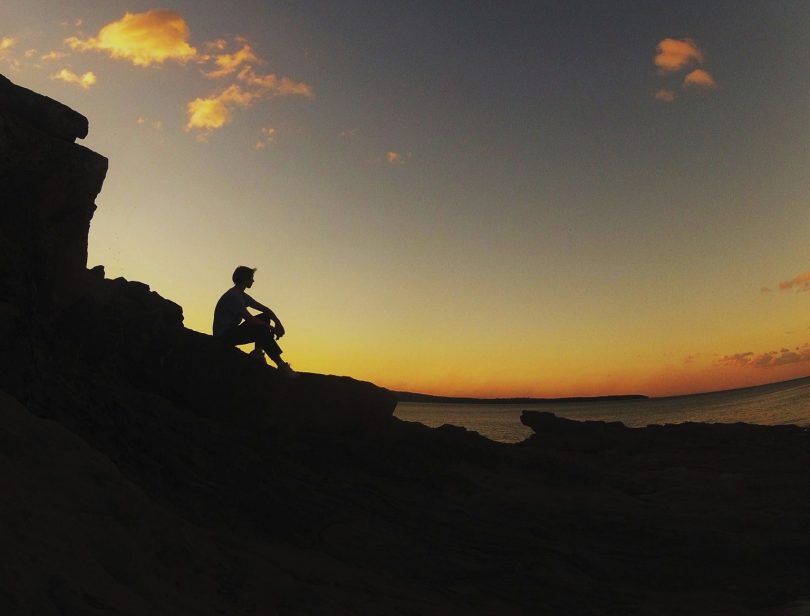 Photographer and filmmaker Harrison Warne says that environmental issues on the far south coast are less evident than those around Townsville, where he went to uni. Picture: Harrison Warne.

While living in my husband’s homeland in Montana in the US, I became aware of the concept of ‘preppers’, people who think that the world will end imminently and are getting prepared by moving to a remote area, learning survival skills like hunting and stockpiling goods they think will be useful come the end of the world.

After seeing emergency preparedness checklists and apocalyptic images circulating on social media in response to last week’s NSW bushfires, it occurred to me that climate change is making preppers out of all of us.

Preppers look to the bitter end of days – they see themselves crawling through wet bushes shooting at mobs of people who are trying to eat their carrots, heroes in an unknown, uncivilized world.

Pervasive stories throughout history often feature these heroes, free of social restrictions yet constantly in danger. Modern war stories and Hollywood drama certainly put it to good use, drawing us in with our worst nightmare inverted into a tale of survival and resilience.

Once, after a pleasant dinner with a friend’s parents in rural Montana, I was led down rough stone steps to a chilly cellar and, when my eyes adjusted to the light, I saw piles of boxes labelled ‘ammunition’, rack after rack of guns lining the walls and huge tubs and cans of liquid cheese, beans and powdered milk, all marketed especially for the prepping movement.

Preppers are often religiously motivated, though not always, but are united in their distrust of government to help.

Part of the reason climate change and climate change protesters have not been taken seriously is that we’ve been good-naturedly ignoring preppers and apocalypse predictions for hundreds of years, as the predicted end-of-days days come and go without incident.

As soon as climate change rhetoric begins to appeal to urgent, apocalyptic imagery, those of us not lost to the Hollywood hero fantasy tend to shut down.

Around the country, catastrophic fires burn. Through media exposure, we vicariously live through these disasters, so although we’re not always in imminent danger, we live as if we are, although the contradiction is apparent when we step into a mild, clear blue day.

Our minds grind, trying to marry scientific theory with our moment-to-moment reality.

This disjunct, coupled with the hugeness of contemplating an ultimately negative future for ourselves and the earth, means climate change is a touchy subject.

Most of us recoil at the thought of talking about it, as arguments seem to spring from the subject, while others protect themselves with crossed arms and closed jaws, unwilling to speculate on how humanity might meet its demise.

The International Panel on Climate Change has given us figures of predicted sea-level rise and temperature rise and reality has given us unprecedented bushfires and floods but still, we’re frozen, arguing about the details of an unknown end.

This reaction is somewhat rational – Earth has experienced five mass extinctions in the last 500 million years and they’ve mostly been really, really slow. Take the Late Devonian extinction, which began 383 million years ago and eliminated about 75 per cent of all species on Earth over a span of roughly 20 million years.

I care deeply about humanity and, like all parents, would do anything to save my own children, but does my heart stretch to encompass humanity in 20 million years? At this point, the end of the world quickly becomes less emotional and more theoretical.

We now number 7.7 billion. One thing that will make a big impact on how fast our climate changes in the future is world population.

We can help get contraception to people who want it.

We can switch to renewables, skip flying, use Indigenous burning methods, plant our paddocks with trees.

But all of this does not alleviate our fears – it could all end with a bang tomorrow or it could be a process which takes millions of years as humanity is pushed through the funnel of evolution, adapting wildly but with no guaranteed outcome.

Addressing our fears about climate change can help sort the wheat from the chaff. What are we really afraid of? Losing our lives or losing the ability to order anything online and have it delivered within three working days?

Whatever you think is going to happen, don’t underestimate the strain of living with the unknown.

You’re not alone. We’re all preppers now, paranoid, distrustful of our governments and shopping online for 5 kg cans of cheese while we still can.

Well I’m prepping. Soon the heavens will open and I will need to put in place extra umbrellas and rubber boots.

Australian Alps and Brindabellas to cop snow tonight according to today’s Canberra Times.

Re “fears about climate change”, I don’t have any. Climate change is part of this planet’s evolution.

“I don’t have any. Climate change is part of this planet’s evolution.”

And crocodiles are a natural part of our planet but smart people are scared to swim with them. Volcanic activity is part of this planet’s evolution but can certainly be something to fear.

When it is winter I don’t stand outside in shorts & T-shirt proclaiming that winter is natural and there is no need to adapt. I dress warmer and heat my house.

History is littered with cultures where climate change (on both large and small scales) has contributed to their demise.

A change in our climate could mean that regions currently capable of supporting themselves can no longer do so. It can lead to political turmoil as nations that are hurting from climate change decide to claim territory from weaker nations with important resources.

Climate change can indeed be a natural process of this planet. It is also natural that we don’t want those we love to be hurt.

Australia burns, Canberra chokes and all of us worry about our future climate