In uncertain times,
we give you certainty.
25 October 2021 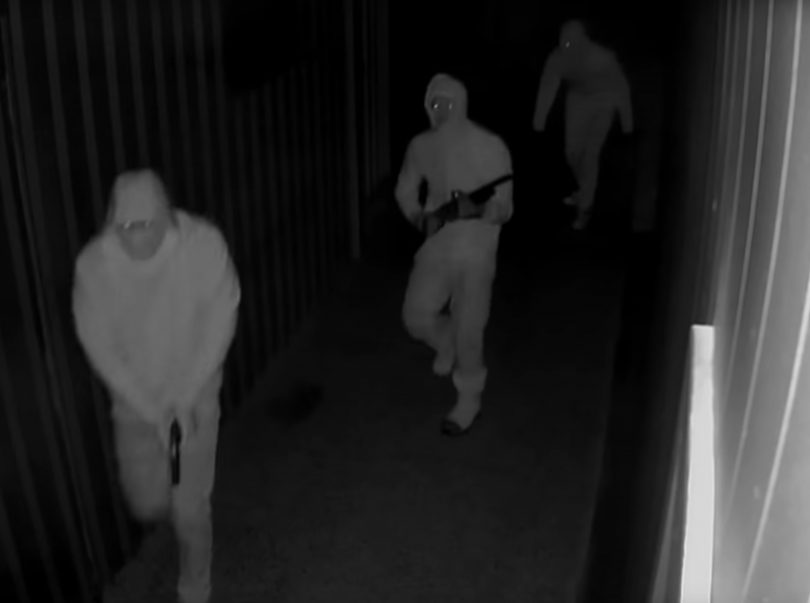 Several intruders were outside the Calwell home on 28 June 2018. Photo: ACT Policing.

A Canberra Comanchero jailed over a violent home invasion and gunfight has partially succeeded in his appeal and can be released on parole as early as next July.

Earlier this year, 27-year-old Axel Sidaros had been sentenced to nine years and nine months’ jail after a judge-alone retrial of the case in the ACT Supreme Court before Justice David Mossop.

On Monday (25 October), the ACT Court of Appeal’s Justice Michael Elkaim announced the bikie’s appeal would be upheld over one of his charges, that of attempted arson with intent to endanger life, finding him not guilty of it.

The appeal was otherwise dismissed, but this still reduced Sidaros’ sentence to seven years’ jail.

In Justice Mossop’s earlier decision, he said a division in the Comancheros in 2018 had resulted in the previous commander, Peter Zdravkovic, being replaced by Pitasoni “Soni” Ulavalu, who was killed in a Civic stabbing last year.

Zdravkovic left the motorcycle gang in bad standing, which disintegrated further when he photographed himself burning club colours.

Sidaros, then 23, went to Zdravkovic’s Calwell home on 28 June 2018, with several others, carrying an Adler 12-gauge shotgun.

Zdravkovic had stepped out of the shower when he heard a bang and saw people with guns. He grabbed his own rifle as shots were fired into the living room, and he returned fire himself.

As the intruders fled, one ignited petrol they had spread on the carport and driveway, setting cars alight.

Zdravkovic, who had been at home with his wife and child, was shot in the hand and needed a finger amputated.

In Sidaros’ appeal, he argued Justice Mossop’s guilty verdict on the charge of attempted arson with intent to endanger life was unreasonable.

The Court of Appeal’s Justice John Burns said for this charge to succeed, the Crown prosecution had to prove there was an intention to endanger someone’s life; it was not enough for the accused to be reckless to the possibility their actions could endanger a life.

He was ultimately “unpersuaded” that the evidence proved the intruders’ attempt to damage the house was made with the specific intent of endangering human life.

He said Justice Mossop had not been satisfied that there was an agreement to murder Zdravkovic nor that the two intruders who engaged in the gunfight had an intention to shoot to kill.

Petrol spread in the carport was lit as the intruders fled. Photo: ACT Policing.

“It is a reasonable hypothesis available on the evidence that the intention of the intruders was to damage or destroy the property by fire and in doing so were reckless as to the possibility of any fire endangering the lives of any occupants of the house,” Justice Burns said.

“In this context, recklessness would include an attitude of simply not caring whether the lives of any occupants were endangered.”

The prosecution could have included an alternative charge of attempted arson along with this charge, but it did not do so, he said.

Justice Elkaim supported Justice Burns’ assessment, although Acting Justice Verity McWilliam did not agree with it.

Sidaros’ new seven-year jail sentence will expire in August 2025, but his non-parole period of almost four years means he is eligible to be released from custody in July 2022.