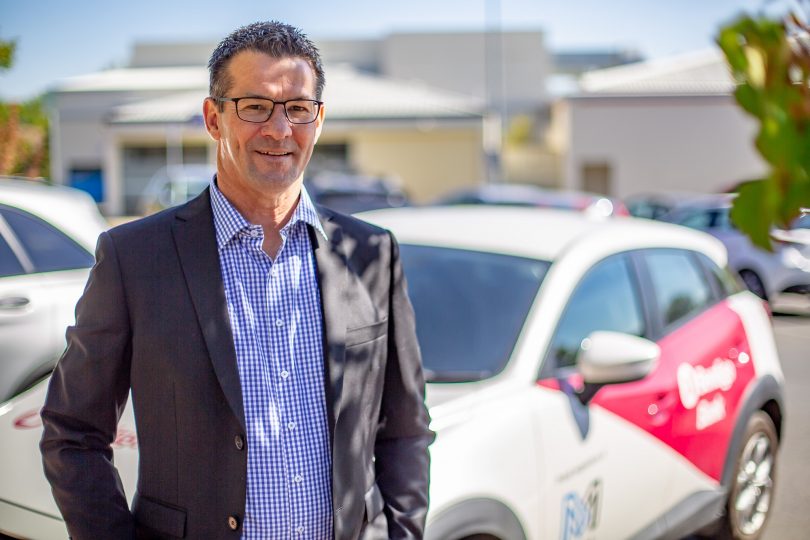 It’s rare to find someone who enjoys their work so much that they’ve stuck with it for more than a decade. But for Peter Grady, stepping into mobile lending was a decision he made with confidence…and that was over 25 years ago.

With a passion for people and being out and about in Canberra, Peter has become one of our capital’s most trusted lenders. He originally worked for one of the Big Four banks, but has now joined experienced lender Bryan Dacey at Canberra Community Bank Group and floats between the group’s four Bendigo Community Bank® branches.

Peter has spent over two decades helping customers across Canberra and Queanbeyan, and says he loves our region’s big country town feel and how easy it is to get to know everyone.

“I grew up in a small town at Moulamein which is on the Edward River and not too far from Deniliquin in NSW,” says Peter. “When I first moved to Canberra it was such a big change for me even though it was much smaller back then. But it’s been amazing to watch it evolve over the years too. My kids have all grown up here in Canberra, and we think it’s such a great spot to live.”

Keen to work in banking, Peter says it was being out and about that drove him into mobile lending.

“I like the fact that I can be out meeting people, and helping them in a relaxed setting. No matter how digital we get, I think customers still like to have that one-on-one, face-to-face service. And we’re all incredibly busy. This way, they don’t need to make time to go into a branch to talk about a loan.

“I meet people for coffee during the day where they work, in the early evenings at their home, and on weekends. Being flexible is part of the job description, and I appreciate that it makes life easier for customers.”

Peter has been managing loans since he started in mobile banking, and enjoys seeing the process through from start to finish.

“In a first meeting I explain the options, and can go away and put together a tailored loan for the customer. If they want to proceed, we go through the application process and I help with the preparation of documents, liaising with solicitors if it’s needed, or manage the transfer if it involves re-financing from another bank.

“Customers often don’t realise how easy it is to move banks if they’re not happy. We take care of everything, they don’t even need to call their old bank.”

Peter’s found that many of the customers who were with him before have followed him to Bendigo Bank.

“Lots of people have followed me from where I was before to where I am now because they feel comfortable. But I also find it’s because they’re excited by the idea of community banking, which is one of the main reasons I made the move.

“It’s a different atmosphere to the big banks. They put back into the community, which benefits everyone. And it’s got that good feel – staff are really lovely to work with. It’s not all about volume, but looking after people.”

When he’s not helping his customers, Peter is a big sports fan and enjoys following AFL, NRL, tennis, and more. He also enjoys water skiing, and takes any opportunity to get down the coast.

“Canberra’s fantastic because it’s so central but offers everything you could ever need. Whether you’re in the mood for the city, the country or the coast, it’s all right here!”

Nada Krstin - 12 seconds ago
Deborah Gale what, your narrative keeps changing? " People in medical or aged care environments are at increased risk" - but... View
News 12

Denise Bourke - 11 minutes ago
insurance'll cover that Shirley View
John Killeen - 31 minutes ago
At least the new electric fire trucks will always be first on-scene to a battery fire! View
Colin Mitchell - 34 minutes ago
Nick Anderson and they don't have service to... View
Opinion 2

Nada Krstin - 25 minutes ago
Zoya, I don’t understand why you even call these people ‘smart’? What makes them ‘smart’ – a uni education or fol... View
News 10

Denise Bourke - 30 minutes ago
Not a blessing for those supposedly buying the homes for aging. Very creative and imaginative but hardly a good match. View
Gary Hatcliffe - 4 hours ago
Get rid of the pokies and I'll rejoin.🤔 View
Community 5

Warren Warrenson - 34 minutes ago
Those are some big days… carrying packs or with support vehicles etc? View
Xuan Le - 2 hours ago
I wish I knew this earlier.... View
Allan Hill - 3 hours ago
Good one Todd man. Got confidence in you... View
Opinion 11

James Daniels - 53 minutes ago
Steve Ross despite any shortcomings, NSW government support for small businesses has dwarfed that provided by the ACT governm... View
Steve Ross - 5 hours ago
As a NSW resident, trust me, there wouldn’t be any difference, no matter if they were in power! 👎🏿 View
Sport 1

Time to prepare to buy your first home

@the_riotact @The_RiotACT
Are you familiar with creepy facts? If so, this ghoulish Ken Behrens #Quiz is for you! It has plenty of spooky stuff for #Halloween, plus a few other bits about Canberra and current affairs https://t.co/kjZY3kTHca (57 minutes ago)