Let us take your development
to the next level.
18 March 2022 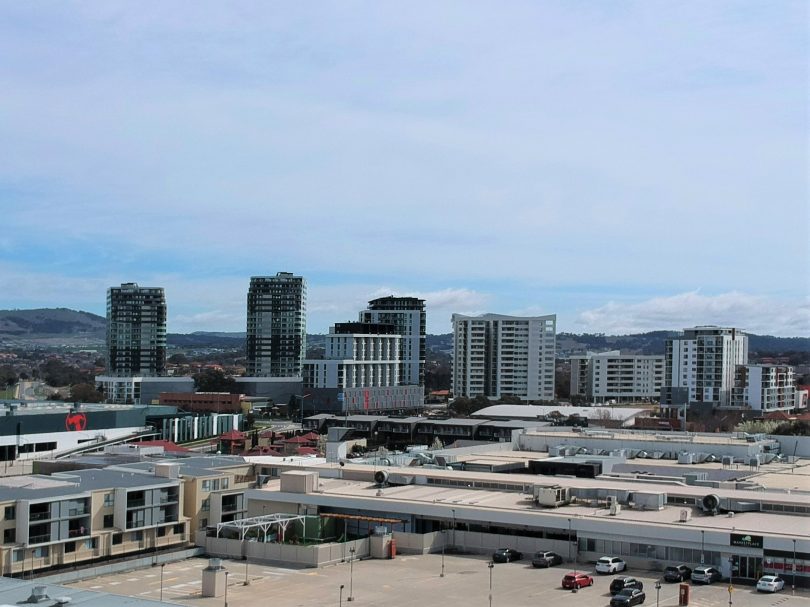 Gungahlin Community Council says the removal of pre-DA consultation was not a good thing, particularly for large-scale developments in Gungahlin. Photo: Damien Larkins.

The removal of the pre-development application process in the draft Planning Act and what may replace it is shaping as a key point of contention in the three-month consultation period.

While it is acknowledged that the current process is not working ideally, community councils are worried that residents will lose out and that language around consultation is too vague.

Feeding these fears is an ongoing lack of trust in the planning system that hasn’t been helped by what most councils see as an inadequate consultation on the reform process.

Gungahlin Community Council president Peter Elford said the development of the new system had not been a co-design process and much appeared to be already ‘baked in’.

“This bread is pretty much done,” he said.

Mr Elford said the removal of pre-DA consultation was not a good thing, particularly for large-scale developments that occur in Gungahlin.

Weston Creek Community Council chair Bill Gemmell said the council had had mixed experiences with the pre-DA process but would rather have it than not.

“It depends on the will that’s brought into the consultation, the spirit of true engagement, or whether it’s a box-ticking exercise,” he said.

“Why not enshrine the principles of consultation in the legislation?”

Molonglo Valley Community Forum convenor Ryan Hemsley said the pre-DA process in its current form was ineffective and did not add much value, but he was wary about the replacement.

Mr Elford said there were no changes related to enforcement yet and that was an area that the community continually found wanting.

He said the Planning Directorate was being too abstract and had not been able to provide examples of how the new legislation will actually make a difference to, for example, the situation the Gungahlin Town Centre faces.

“The directorate doesn’t seem to have thought about this through the eyes of residents,” Mr Elford said.

He was also wary of terms such as ‘principles’ because, if it isn’t in the legislation, the chances of it happening were remote.

The timelines for the new Territory Plan and District Strategies, and the consultation to follow remained vague, Mr Elford said.

Mr Gemmell said he was alarmed that the draft Bill did not provide for development consultation with incorporated community groups, including the community councils. He was concerned that too much policy was going to be included in regulations rather than legislation, one of the reasons why the current law is difficult to navigate.

“The more you put in regulation, the less proper scrutiny we get in the Assembly,” Mr Gemmell said.

He is also worried about Access Canberra being given responsibility for regulatory matters and the possibility many would disappear into a ‘black hole’.

He said the early signs were good, “but it all comes down to the new Territory Plan, that’s the bit that actually operationalises a lot of the good intentions outlined in this Bill”.

“That’s the one we look forward to scrutinising in greater detail,” Mr Hemsley said.

The Forum was also keen to ensure a fair process for formulating the District Strategies so they are equitable.

“There needs to be consistent methodology across the districts to ensure they all get the same level of services and facilities,” he said.

Housing lobby group Greater Canberra called on the government to emphasise housing supply as a key priority of the new Act and Territory Plan.

“We believe that every Canberran deserves a home, and this principle needs to be at the core of our planning system,” convenor Howard Maclean said.

He welcomed the new Territory Priority Projects process, which would allow widely supported public transport and infrastructure projects to proceed without being subject to stalling tactics and the removal of pre-DA consultation.

The group is concerned that the District Strategies may allow specific regions to deny much-needed new housing.

“It’s crucial that the new district strategies work with the Territory Plan to create more affordable housing. District plans should not be a way for high-income, low-housing neighbourhoods to lockout younger, lower-income, or more diverse residents,” Mr Maclean said.

Inner South Canberra Community Council chair Marea Fatseas said it was too early to comment on the draft Bill, but the council would look at the proposed legislation over the next few weeks.

All community councils will be making submissions to the consultation process.

The draft bill is available for public consultation through the Planning System Review and Reform YourSay Page until Wednesday, 15 June.

There is something strange going on in the ACT planning system, because we are told there is a shortage of apartments yet recent GeoCon apartment blocks in Civic are mostly empty.