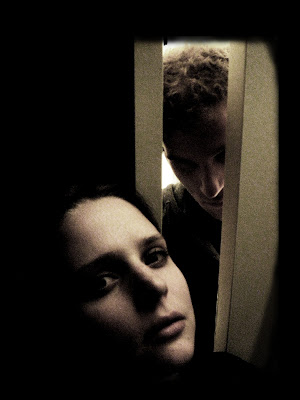 The Street Theatre will launch the 2010 Made in Canberra season with Love Cupboard, a new full length work written by emerging Canberra playwright Emma Gibson. Part whimsical fantasy, part comedy and part drama and all love story, Love Cupboard explores the darkness and light we all hold within, and the conditions and abuses perpetrated in the name of love.

Warren has a secret. Two years ago his schoolgirl girlfriend Annabel went missing, and her family and friends fear she is dead. But Warren knows the truth. Having run away to be with him, she hides in his cupboard by day and spends her nights with him. But with the outside world closing in on them, Annabel can’t stay hidden forever and the truth will come out.

“It’s a story about love, obsession and loss,” explains playwright Emma Gibson. “The idea came to me late at night when I was half-watching TV and thought a subtitle said ‘Love Cupboard’. It didn’t, but I thought it was such an interesting title I had to write it down. From those two words, the rest of the concept formed that night—what if you loved someone so much you were willing to give up the rest of the world and live in a cupboard just to be with them?”

Emma Gibson represented Australia as a delegate at the World Interplay young playwrights festival in Cairns last year, where she workshopped the script. “It’s amazing how much the script has changed and it continues to surprise me. I hope it will surprise audiences too.”

Twilight performance Sunday 2 May at 4 pm.

I think I heard an extract of this on ABC radio on Sunday morning. The girl has just turned 15 …This is illegal… yarp,yarp…

Juliet was 13 with Romeo as the older man.
Lolita was 12 and Humbert in his early 40’s
Mary was mid teens and Joseph in his 40’s (although god’s age might have to come into the equation)

I think there is a bit of a precedent of underaged girls and older men appearing in the arts.

Do you get equally indignant when people speed or do drugs in the movies? What a sad life you must lead if you refuse to see something because it portrays an illegal, unethical or immoral act.

Sounds suspiciously like the story of Natasha Ryan a few years back. Could be interesting though.

I think I heard an extract of this on ABC radio on Sunday morning. The girl has just turned 15 (at least at the time they meet), and the man is 12 years older. This is illegal. Given this age difference, the man would probably go to prison, even in the ACT. He would be classified as a sexual offender and would need to undertake a treatment program. I haven’t seen the play (and won’t be seeing it), but the reviews/blurbs about it don’t touch at all on the illegality and immorality of the scenario, (though perhaps this is implicit in the police being involved? my impression was that they are involved because she is a Missing Person, not a victim of a sexual offender). In fact one review refers to Annabel as a “young woman”. At 15? Really? Perhaps she is older when the “cupboard love” begins?

Joanna Smith - 51 seconds ago
Inge Kent I wish mine was worth that!! View
Pradeep Bishwakarma - 1 minute ago
Crazy market Shiva Sapkota! Only the RBA Can fix this View
Rebekkah Patton - 1 hour ago
Jamie Patton the price 😱 View
Community 11

Mellissa Craft - 37 minutes ago
Ewa Adams come visit? View
HiddenDragon - 4 hours ago
Spiders eating deep space antennae? - a glimpse of the future if we embrace nuclear in the pursuit of net zero...... View
Bruno Marzano - 4 hours ago
If by SciFi movie, you mean documentary View
Opinion 84

Ian McLeod - 3 hours ago
We absolutely should not build across the river right up to the Brindabellas either as certain politicians have been pushing... View
Ian McLeod - 3 hours ago
Yep love it here but short sighted planning is becoming an issue and light pollution is worsening. The obsession with bright... View
Jordan Ennis O'Neill - 5 hours ago
yep... this place lost its mojo a few years ago unfortunately. things only get worse from here View
Motoring 3

HiddenDragon - 4 hours ago
Another case study of the incompetence and impracticality of this government. Consumed with the big picture, feel good, sound... View
Capital Retro - 11 hours ago
Oh, the perils of virtue signaling. It would be hilarious (like an episode of Yes Minister) if it didn't mean this will cost... View
Opinion 79

Julie Macklin - 8 hours ago
I cycled and rarely had to face the parking problems people complained about. When it rained I took the bus, even though I ha... View
Maya123 - 8 hours ago
We had flexitime and we had clocks, do there was no way someone could cheat on their hours. Whether the individual actually w... View
Julian Hayes - 9 hours ago
Because I've seen the truth employers simply make their employee's work a 12 hour shift as its still within not having to pay... View
Opinion 1

John Moulis - 20 hours ago
It's not a good tattoo. Tattoos such as this with script across the shoulders and on the lower arm should be scripted either... View
show more show less
*Results are based on activity within last 7 days

WARNING: This story contains descriptions of domestic abuse. As a woman was brutally choked until she blacked out, her attacker...
Property 13

A father accused of punching his 16-year-old daughter in the head while they were in front of other children has...
Courts & Crime 1

It is "unforgivable" a woman bit a police officer twice when they were just doing their job, a court has...
Courts & Crime 0

A man allegedly caught with a massive haul of cocaine valued at up to $180,000 has been accused of operating...
*Results are based on activity within last 7 days

@The_RiotACT @The_RiotACT
Can your boss tell you what to wear at work? This week's poll asks whether common sense about workwear is actually all that common. And readers say the government should rev up our motorsports facilities https://t.co/DoNwT3GgIB (1 hour ago)