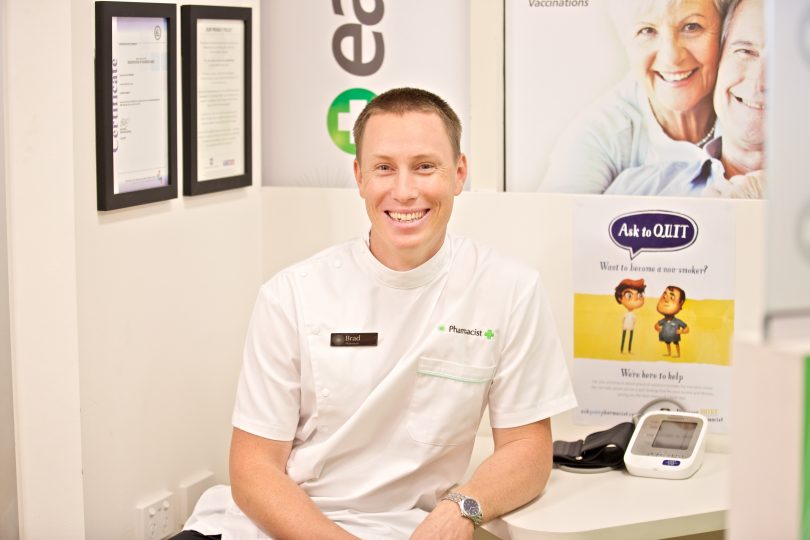 A local pharmacist and founder of a pharmacy-delivered clinic service for urological and prostate issues in male patients has been awarded the Most Outstanding Community Pharmacist of the Year award at an event hosted by the Australian Patients Association in Melbourne last Thursday (25 July).

Brad Butt from Cooleman Court Pharmacy in Weston, was nominated by members of the public for the coveted national title, which recognises the increasingly important contribution community pharmacists make in helping improve health outcomes for patients, and identifies leaders in the industry.

Acting National President of the Pharmacy Guild of Australia, Trent Twomey congratulated Mr Butt, saying that his work reflects how much patients and consumers recognise the importance of a community pharmacist’s role.

“His commitment to the delivery of professional services and to making his pharmacy a community health hub show where the future of community pharmacy lies,” he said.

Victorian State President of the Guild Anthony Tassone presented the award and said it highlighted the critical role pharmacists play in the community.

“This award is important because it aligns so closely with the work community pharmacists across the whole country undertake every day,” he said.

“Patients and consumers have great faith in their pharmacists, with the result being that we are consistently ranked along with nurses near the top of the most trusted profession lists.”

“On top of that, public opinion surveys have consistently shown that 95 per cent of patients are satisfied with their community pharmacy.” 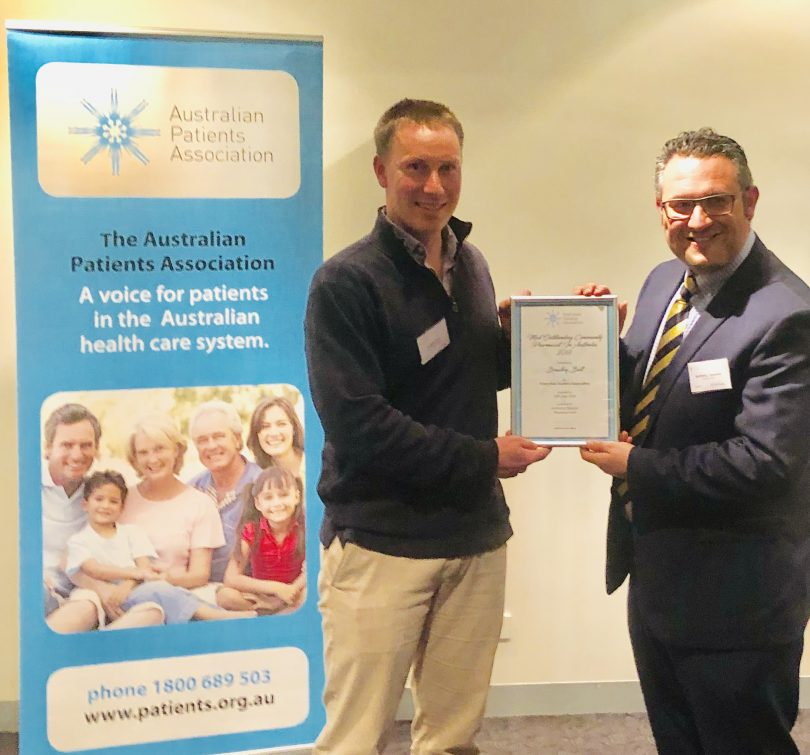 “Brad Butt and the Cooleman Court Pharmacy team are leading the way in providing a range of services and demonstrating the great results that can be achieved when community pharmacists are given scope to better utilise their skills and knowledge,” Ms Beerworth said.

Mr Butt, the recipient of the award, echoed these sentiments and believed the personal touch the health professionals at Cooleman Court Pharmacy provide contributes to their exceptional service.

“We ride the highs and lows with the patient and their families.”

“We take the time to ensure our patients are best-equipped to not only manage their medication but their health more generally. Being a pharmacist is so much more than medication supply,” Mr Butt said.

In 2013 Mr Butt founded the Men’s Health Downunder service, based in Weston, to assist men and their partners with a range of urological and prostate issues.

The program, although based in Canberra, reaches patients in all metropolitan centres as well as regional and remote Australia.

More than 18,000 cases of prostate cancer were diagnosed in Australia in just 2014 and affect one in seven men before the age of 85. It’s estimated erectile dysfunction affects over one million men across the country with ramifications which can be wide-reaching and disabling.

“We’re very grateful to the Australian Patients Association for this award and hope that by accepting this award we can inspire other community pharmacists to enhance services to their patients beyond medication supply,” Mr Butt said.

Such a nice guy! Congratulations!

So well deserved. Brad takes excellent care of our family and always goes above and beyond.

Nice work! We go to this chemist. Brad’s great.

Well done Brad your a champion

Such a professional. So well deserved. Congratulations!

Amanda Fintan I would’ve voted twice if I knew. He’s a star. In fact, the whole team is great.

Carl Ostermann - 19 minutes ago
In the nineties, it was adventurous gnomes sending their owners... postcards from all over the world View
News 30

Barbara Boswell - 58 minutes ago
Definitely hope so. Love V8s.... View
Dale Brittain - 1 hour ago
Choco Munday i experienced them first hand. I understand what you are saying View
Choco Munday - 1 hour ago
Um....no. The green lobbyists had the ear of government then, and they will oppose this now, even more fervently. The inner c... View
News 33